Hi it's Baloji. Support me by funding my new short film "Spotlight" ! 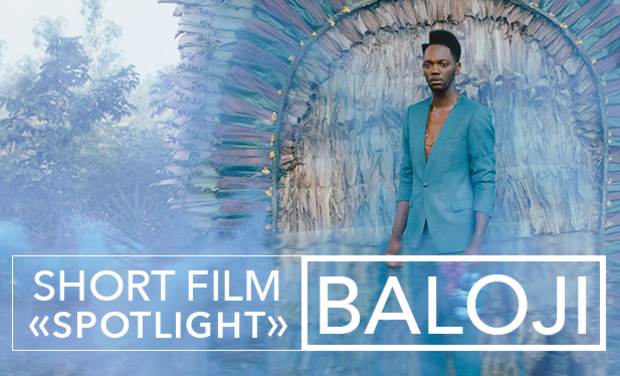 My name is Baloji and I am a musician and director. After three albums with the Belgian rap group Starflam, I released my first solo album « Hôtel Impala » in 2008. This album was a reply to a letter I received from my mother after 25 years of absence. That album was followed by Kinshasa Succursale (a Congolese version of Hôtel Impala) in 2011, an EP « 64 Bits & Malachite » on the Bella Union label (home of Father John Misty, Beach House…).

I have just released my second solo album with the same label : « 137 avenue Kaniama ». With unanimously positive reviews (Telegram, Le Monde, Libération), tracks on the BBC playlist and on France Inter, including « Hiver Indien », which also featured on the FIFA 2018 game.

This album is accompanied by a short fiction film that I directed, called « Kaniama Show ». It is a satire of African propaganda TV shows and includes the first single from the Album, « Soleil de Volt ».

Having directed all my previous videos, including the one for « Peau de chagrin » and in parallel with putting together my first feature film, planned for 2019, I am working on a new short film project for « Spotlight / Bipolaire » described below.

I got the idea for the song, « Spotlight », one night in a club when a friend took a picture of me, my eyes glued to my phone, my face illuminated by the light from the LED screen, which acted like a spotlight.

My phone as a sort of extension of my right hand seemed to me like an interesting angle to address some of the themes that fascinate me: dopamine, our passive addictions, fear of missing out on news, or a trend (FOMO), our visceral need to share events, our inability to choose where we want to be because we’re in several places at once, but ultimately nowhere, reflections around the idea of staging and editing our lives in real time and the distance from the people around us that comes from this “shared isolation”, all in the perfect meeting, and sharing, place that is a nightclub.

“Excited the psyche/Just with a Like/The moment’s lived because we post it, stigmata under the gloss/We life with the fear of being cast aside, of missing out/FOMO and anxiety”

I was reminded of a photograph by John Stanmeyer (see above), winner of the World Press Photo of the Year in 2014, of migrants on a shore in Djibouti, raising their arms in the air with their phones in their hands to try and catch a signal. This picture illuminates our relationship with our phones, but it’s also reminiscent of the situation in the Congo, when in the days before an anti-government demonstration, the Internet fails mysteriously, or simply disconnected  for the duration of the protests.

I started to develop a script for a short film, interweaving club scenes, choreography with one hand gripping a phone and visual motifs such as mirrors made out of various types of screen in which faces are reflected, visual games that isolate the protagonists, with installations using 3D masks that blend tribal and neo-futurist references, like I did with the Kongo Astronauts (in the video for “Capture”), except here I team them up with works by African artists who are exploring questions around afro-tech and augmented reality.

The characters are in clubs, or in exterior night scenes with their arms stretched out and their phones in their hands (in FaceTime position), filming scenes without reacting to them in order to share them instantly, expressing this disconnect between an experience shared online and one lived in a “dissociative” body and in a place that becomes secondary.

The film is created with a strict colour theme (yellow/copper and black), with aesthetics and styling that flow from these guidelines. Whilst also using the camera and selecting the props carefully to give a cinematographic feel, both in the method of lighting and of reflecting light on black skin.

The second part of the film takes place outside with a change of music (the track Bipolaire) and featuring a series of portraits that evoke a deserted Kinshasa  whose boulevards are crossed by knights, traffic robots or business men on stilts that we discover are commanded by a European type character, inspired by Vincent Bolloré (a reference to the lyrics of the song), dressed like General Mobutu (dinstinctive hat, suits). Their movements are interspersed with lip-synch scenes featuring absurd choreography harking back to the dance sequences on the Black and White Minstrel Show.

I directed my last 7 videos, taking charge of artistic direction and styling because budgetary constraints prevented me from working with a production team.

I really enjoy creating the visuals and the videos of my records; they’re an extension of the song, as my most recent video "Peau de Chagrin / Bleu de nuit”, which develops the theme on the album sleeve made six months previously, shows. Our desire to tell stories ensures we make up for our lack of resources by preparing hard, since we have to film quickly, efficiently and in a structured way to be able to react to the unknowns inherent in filming in a country like the DRC.

Filming for this short film was supposed to take place in Kinshasa, in a fantastic club with a coloured checkerboard floor, but when a sponsor dropped out at the last minute, the project fell through… I was depressed, I had worked so hard on this production, I was obsessed by the images i had of it in my head and the relevance of the message, so I said ... OK ! Let's ask for help from the people who follow me on social media and who might like to bring this project to life, rather than letting it end up in the trash on my computer.

I have a licensing deal with Bella Union, an independent record label which commits to financing only one video per album (more according to sales targets), so I should have reached the end of the road on this, but I want to believe we deserve better!