Make the first documentary film on Bass Music in Europe. A journey to the heart of the music, with the peoples who compose the scene 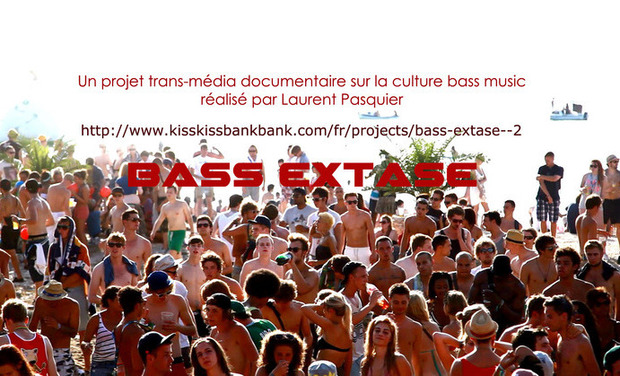 WHAT IS THE BASS MUSIC?

• A music that emerged in the 90s on the underground scene in London and explodes internationally.

• An intense music which experiment the limits of the body through the sub bass that can be felt physically.

• An urban music which becomes very popular with event attracting hundreds of thousands of people around the world.

• A rapid expansion of this music, through internet and digital plateforms giving easy access to both listenning and production tools.

• Today many artists from the Bass music exceed easily millions of views on YouTube, we find Bass music on Radio, Television, or advertisements for luxury cars.

The Bass Music becomes a musical, social and cultural phenomenon. It affects all social classes, all ages, all styles.

• The first film documentary on the Bass music exploring its differents aspects and history.

• Bass Extase presents the creative process of DJs and producers, the different steps of production to distribution, the backstage of the organization of concerts and festivals, and the perspectives of people who knows and loves this music.

• The film shows through interviews, the emergence of the movement and his evolution until today.

WHAT HAS BEEN DONE

• Since May 2011, many concerts, parties, festivals was filmed by Laurent Pasquier and different peoples who help him.

• The Logging images, already filmed for a broader vision and begin to articulate the purpose of the film.

Here is the list of artists Djs, Producers and Composers who have already been filmed and interviewed for the movie :

Agencies, theaters, clubs, festivals or media that have trusted us for the movie !

PUBLISHED IN THE PRESS

They talk about Bass Extase in the press, in a French magazine specialized in electronic music:

WHAT NEEDS TO BE DONE

• The creation of the DVD.

• The creation of photographs exhibition

•Conferences with projections of the movie for youth and students in colleges or universities.

• Project to make a long version of the film, including scenes of fiction.

A financial contribution has been achieved through:

and Aid to Citizens Youth Projects in Rhône-Alpes, France (1200 euros).

This assistance has allowed to take the costs of governance during the shooting (2200 euros).

The project leader Laurent Pasquier is personally involved in the funding of the control (1300 euros) and the audio and video equipment (5200 euros).

Many volunteers have contributed to the project, providing technical and logistical assistance

To achieve this project, the collection would therefore cover a part of the following costs of:

• The purchase of archival footage (1000 euros)

• The creation and printing of the Poster (500 euros)

Meanwhile, we are prospecting for other funding sources to cover our expenses

Supplementary material that might be added depending on grants :(Reserve in obtaining new grants):

• Filming additional scenes in the form of fiction to make a longer version.