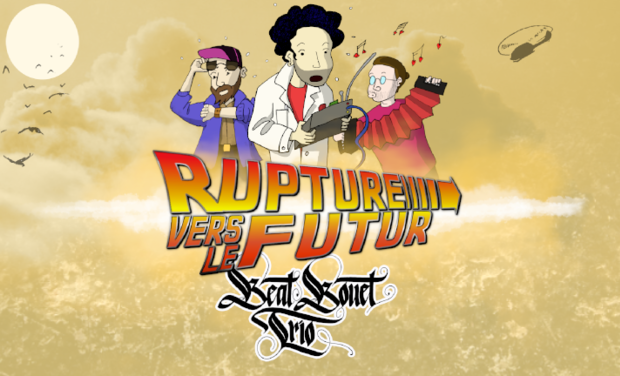 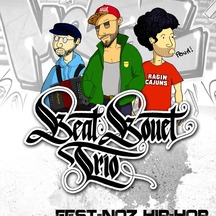 But what are these guys, who have been touring in bals and fest-noz for almost seven years?

Mmm, yes... seen like that we don't seem too clever... Lots of fun, a touch of hickness, a few engaged lyrics and let's go party ! We can almost forget that our lyrics are mostly serious with nowadays, and that we make it with Trad music mixing it with Hip Hop... Come on !!

Ah well.. Is the context better explained like that ?

So ! What's new in this album?

So it's not always easy to innovate AND stay true to the spirit of the original band.

We must tell you everything : Between "Soumission Impossible" and " Rupture vers le Futur "(did you catch the FRENCH super pun?) We welcomed a new guy among us to replace Vanao :

So in this new abum, there will be old-fashioned FR rap, sad songs with accordion trips, a new mazurka, a touch of dancehall.. But ! We will also find a new sound, inspired by "trap music" and "cloud rap", two new rap trends that, us, hip-hop lovers haven't forgotten to listen to. And finally, there will be a Creole featuring with our friend Singer and Beatboxer Chris Nolly !

So you'll may enjoy 17 tracks with lots of new songs. All the recordings are certified AB (Accordion / Mouth) (a French pun again ;) ) because we did not use any synthetic samples, as we are used to do !

Oh yes ! that's not all, this year, at the same time as the album, we plan to make a short film. Yes yes, perfectly, we are going to make a film and also the whole soundtrack and that is super cool.

It is a "Complainte", the story of a boy and a girl who have been getting together for a long time. But the girl's parents want to marry her with the son of a lawyer ... Anywway, a typical Brittany story with blood and tears. Which is really exciting is that the action takes place in 1855 (well yes, time machine...) that we will shoot with a hundred people entirely in costume, and will reconstruct scenes of life from the Breton 19th century. To resume it : An old postcard animated and in colors ;)

We can already tell you that we have found accomplices to help us in this mission in the name of Le Cercle de Kerfuntun aka Eostiged Ar Stangala (see T-shirt of the first photo).

As on the previous clip, Romain Evrard will be on the direction.


All this things costs a maximum of money. For example, paying an aperitif to an entire Celtic circle is a real financial pit...

So it's not very complicated

The crowdfunding that we are launching helps us to finance both : the release of the album and the short film which is integrated in the full project.

If we exceed the amount, well, it will be really really cool! We could add more special effects on the film for example ! Because to tell you the truth, € 4,000 to make a historic film is really not much and fortunately we have lots of friends and support to help us voluntarily.

If we reached 3600 €, it would be really good, we could pay the commission of KKBB and add a little margin to the financing of the clip.

TOTAL: € 3,200.00 (that's not a lot cause we already purchased material for the 2nd album and recorded everything at home, we make by ourself visuals, etc...)

Travel expenses for all of actors/actress' : 500 €

Recordings (phew it's over!)

Oh yeah ! The new album on your hands ! Delivered to your Home on March 2020

Tea for two and two for tea ! Here are two albums for you ! Delivered to your Home on March 2020

2 albums at Home and 2 tickets booked for you for the Album Release in april 11th @ Mauron. There will be here with us : Plantec, Arvest & James/LeBreton.

This time, you can have 1 album & a 3-hours masterclass with the subject of your choice : Gallo Trad Singing, Diatonic Accordeon, human beatbox, basketry or Beef Dressage ! (Masterclass will be in Bretagne next to BBT Home)

A big pack for those who want to help us more ! You'll have 2 albums, 2 billets for the release album (april 11th in Mauron with Plantec, Arvest & James/Le Breton) + 2 invites for our futur short-movie in preview showing.