Join a photographic trip towards the discovery of the universal dynamics of the affirmation of a gender identity other than the biological one. 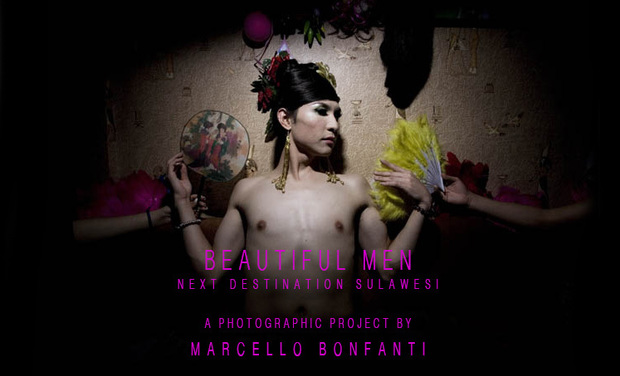 Male or Female? Nature or culture? Choice or fate? Is the border between male and female a certain fact, an intimate need or a social convention? These are the questions I came across while I was working on my international photographic project BEAUTIFUL MEN that investigates a dynamics that is present in every epoch and in every culture: the affirmation of a gender identity that is other than the biological one. I have started my trip in Cuba in 2004, where I have photographed a group of drag queens, I have continued the project in China in 2006 where I have followed a group of male performers that were playing female roles, and then in 2012, in Tonga, I have portrayed the fakaleiti, men grown up as women, the third gender of Polynesia. Do you want to join the trip? The next destination is the island of Sulawesi in Indonesia, where I will photograph the Bissu, a group of transgender animist priestesses. Biologically males, but apparently women, they embody the coexistence of the male and female principles.

Images from THE QUEENS OF BEIJING - Beijing, 2006.

After my bachelor in Photographic Arts taken in 2002 at the University of Westminster in London, I have concentrated my research on the use of the photographic medium in the representation of identity, working as portrait photographer for the main Italian and international magazines.

I have started this project in Cuba in 2004, in the secret rooms of San Isidro, a popular neighborhood in L’Havana, where late at night, same as chrysalis, men were undergoing a painful and melancholic process to transform themselves into women. They performed illegal, clandestine and colorful shows, advertised at the very last minute to a very selected audience. This series has received several important awards including a prize at the WORLD PRESS PHOTO 2005. The work continued in 2006 in Beijing, where some groups of transvestites started to perform publicly in some gay clubs, after having secretly kept alive for decades the ancient tradition of the Chinese Opera to have male performers for female roles. This tradition was interrupted by Mao in the 60’s. This series was exhibited at the Triennale Museum in Milano. In 2012 I have travelled to Tonga on assignment for Vanity Fair, to photograph the ancient tradition of the fakaleiti, the third gender of Polynesia. They are men grown up as women, for their own choice or for choice of the family. The fakaleiti are perfectly integrated in the local society, they can have a partner, have a family and adopt children. Every year right before the monarchy celebrations, they take part to the very popular Miss Galaxy festival, where the fakaleiti beauty queen is elected.

NEXT DESTINATION SULAWESI With your help, I would like to produce the next chapter of this project on the island of Sulawesi, in Indonesia, where the ethnical group of the Bugis has kept alive the ancient tradition of the 5 genders, male, female, calabai (false female), calalai (false male), but most of all the Bissu, a cisgender that embodies the 50% of the male principle and the 50% of the female principle. The Bissu operate as priestesses celebrating animist rituals that were integrated in the local islamic tradition, and that define the fundamental steps of the community (the rice seeding, the departure for a pilgrimage, the blessing of the swords and so on). In the ritual dances of the Bissu, their hermaphroditism, both apparent and spiritual, is considered a tool to concentrate spiritual power and to get in touch with the spirits of the underworld. The social organization of the Bugis and the spiritual function of the Bissu, is a rare example of how this universal dynamic is perfectly integrated by a community. The Bugis believe that the coexistence of the 5 genders, can guarantee the cosmic harmony and the balance of the earth.

PHOTOGRAPHY AS EYEWITNESS OF THE UNCERTAIN FUTURE OF THE BISSU

The importance of this work is not merely artistic, but it also has the function of witness. The Bissu are a rare example on the symbolic and spiritual scale of the gender identity and of its balancing power. The future of the Bissu is in danger because of a substantial lack of calling towards this spiritual path among the youngest generations. This is putting at risk the existence of this millennial tradition.

There are very few photographic and video documentaries on the Bissu, among which this video produced by the National Geographic.

AUTHORS THAT HAVE WRITTEN ON THIS PROJECT

THE QUEENS OF CUBA - L'HAVANA

THE QUEENS OF BEIJING - BEIJING CHINA

THE QUEENS OF TONGA

Exhibited by Made - Torino - Commissioned by Vanity Fair, published by GQ.

I have decided to start the crowdfunding because of the crisis in the editorial maket, that since a few years ago, was producing these kind of projects..

The crowdfunding will be covering the following costs

- Accomodation and restaurants for a month 2.000 euros

- Production and delivery of the rewards 700 euros