Participate in this rocking music documentary about Beb, a French singer invited on stage by The Shrine for Psycho-Vegas in August 2016 ! 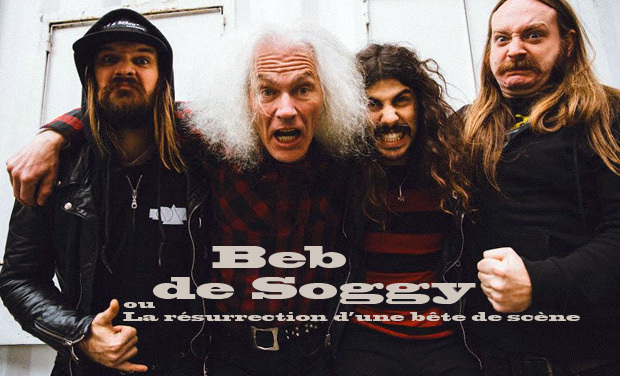 A FUN AND ROCKING MOVIE, AN UNLIKELY ODYSSEY

A “Totally sick!” Rock Documentary. It reinforces the myth of Soggy and tells a rock story from within. This music road movie, directed by Olivier Hennegrave, Soggy's former drummer, depicts the uncommon life of Beb 30 years after his last concert!  With a heavy duty soundtrack of course! Play it loud!!

Olivier Hennegrave:  “As Soggy’s former drummer and as Beb’s earliest fan, it is only natural that I wanted to follow and film his comeback on stage.  As events precipitated, I have decided to self-produce this film. I am financing all the filming in France concerning the life of Beb. I want to portray the phenomenon that he is both in his daily life (at work, at home, with family and friends) and on stage (guest with The Shrine at he HellFest on 17th June 2016).

I am self-sufficient with my professional HD camera and editing suite but I can only sustain of the French side of the filming. I think it is great that the Shrine have invited Beb to rehearse in L.A. and play in Las Vegas but neither I nor Beb can finance the American leg of the film. Moreover, the film crew will count two additional staff François Alvarez (ex-manager of soggy) for advice, and Olivier Lestoquoit as assistant and interpretor.”

Thanks to this crowdfunding, you will participate in documenting perhaps one of the most incredible come back by a French rocker.  Your contribution will help us travel to the land where rock originated.  We can all, as fans of Soggy and all those who discover this story, fullfil Beb’s craziest dream to go and play in the U.S with The Shrine in Las Vegas, at the rock festival Psycho-Vegas headlining Alice Cooper.

Soggy (1978-1982) was a French rock band. Formed in Reims, in the city of the French royal crownings, there was nothing about the four future members of Soggy to become one of the most authentic and furious garage band that France had ever known.  Even more so now 34 years later, when the recognition is coming from all parts of the World: Soggy is talked about in New Zealand, Australia, Burma, Japan, Brazil, and Scandinavia. The rumor of a wild and cult group spread like a wildfire.  Thanks to the Internet and digital technologies!

When Soggy split in 1982, the group is heavily in debt.  The guitar player, Eric and Olivier the drummer are both gutted and they decide to take a radical turn in their lives. The former has become a History Professor at the University of Montpellier and has become quiet proficient in wielding the sword in the Historical reenactment in Rome arenas of Nîmes. The latter is now a documentary director and covers various subjects. The environment, sports, history and portraits are among his favourite themes.  With his camera in hand, he has travelled to Africa, Asia and Greenland.  The bass player François is the only one to have continued in the music business and has played in numerous bands. His appetite for rock music and his thirst for the absolute have eventually killed him.  He died of cancer as Soggy’s album was released in 2008, marking the return of the band in the record stores.

As for Beb the singer, after an initial come back in 1986, disillusion is so great that he gave up, with nobody there to continue the fight.  He took the decision. He would not make a living with his love for music, convinced that he was a curded singer, rejected and misunderstood.  He found a job with the town maintenance services and drives his lawn mower with a rage that never leaves him.

The story could have ended in 2008 with the post-mortem release of the album when a video produced by a French TV channel on 23 May 1981 is posted on the Web.  And the first miracle occurs when the filmed powered-up performance from Beb, out of control, is seen around the world.

Most comments come from the U.S.  The recognition comes late but makes sense because the band’s style is mainly influenced by the Detroit punk-rock scene of the early 70’s with the likes of MC5 and especially The Stooges. The singer Beb developed on stage an animalistic presence that’s very close to that of Iggy Pop’s whom he clearly admires.  “Far from being a poor copy of these legendary American bands, Soggy was playing on an equal footing with these monumental punk rock bands.  Had they been American, it is very likely that they would enjoy a far more enviable status today.” Thierry Aznar (extract from the book “Hard Rock & Heavy Metal, 40 ans de purgatoire”).

Always hyper, Beb does not go unnoticed.  Who has never seen this 60 years old atypical guy with his leather jacket and his white mane withstanding the test of time, racing though the streets on his 1977 Peugeot bicycle, is not from Rheims.

Beb, is like that, he does not change. He is the eternal rocker and a special rocker too, against all stereotypes.  His life as a rocker is vital. Uncompromising with others nor with himself, he has his own vision and conception of rock music should be like.  Beb is above all an athlete and lives on a strict diet and lifestyle: No heating in summer and winter alike. He has a small room for his daily workout: 700 sit-ups before going to work at 6 a.m.  Beb has an amazing six-pack. The guy is old enough to be a grandfather. Beb is achieving his mantras for rock with only goat milk and only a few pieces of bread.  And it works, the guy has stayed in top shape as if he had waited his entire life for a possible come back.

When people started talking about Soggy again, Beb did not believe it or refused to believe it rather. Then a California band The Shrine covered ‘Waiting for the War”, the emblematic Soggy tune on a 12” single.  A few months later, and crazier still, The Shrine while on tour in Europe, contacted Beb, to invite him to join them on stage for their Trabendo gig on 17 November 2015 in Paris.  When he  sang the song with The Shrine and crowd surfed over the enthusiastic public, he, the unknown had to admit that it was all was completely crazy!

Icing on the cake, in January 2016, Soggy signed a contract with the New York label Outer Battery Records to reissue their first album released in Vinyl in 2008 for a available worldwide on CD, streaming, and Silver vinyl Edition (release foreseen in July 2016).

“High fusion point, between The Stooges and Mötorhead,  Soggy was one of the wildest and fire-up band to come out of France. Despite a handful of crazy hit tunes and a completely possessed frontman (Beb, the most beautiful tuft on the scene since Rob Tyner of MC5), Soggy will have last 5 years, splitting in 1982, leaving just one 7” (Waiting for the war / 47 chromosomes)” Lelo Jimmy Batista, editor-in-chief of “Noisey France” and author of “Hellfest X” (pub. Hachette )

Extract of Josh’s (The Shrine) interview for newnoisemagazine.com

"You guys have shared the stage with bands like Motorhead and Kyuss Lives and are about to play a few fests in Europe with Black Sabbath, Iron Maiden and some other heavy hitters. If you each had to pick one band that you have left on your list to play with, going forward, who are they? " "The coolest thing we’ve gotten to do was playing with Soggy’s “Waiting For The War” with Beb the original singer. We did it in Paris 2 days after the horrible terrorist attack at the Eagles Of Death Metal concert. This 60 year old dude ripped his shirt off and sang a song he wrote 30 years ago about feeling like a pawn in the politician’s game, feeling like nuclear war was coming and all us regular people didn’t have a choice, we’re stuck living in fear. A protest against war, violence, corruption….a very special song to us."

Your generosity will allow us to film an essential sequence for the rock documentary from 22 to 31 August 2016 in the USA in California and in Nevada.

This will be Beb’s first trip to the U.S. where it all began:  Detroit, Iggy and the Stooges, Ted Nugent and the Amboy Dukes, MC5.

We will film the journey from Rheims to Venice, CA., the rehearsals with The Shrine, and the climactic gig at the Hard Rock Hotel in Las Vegas before four thousand people that we hope to be a huge success.

In order to complete this crowdfunding campaign, we set up three threshholds:

Here is the budget for the first threshold amounting to EUR 8 000:

Car rental for the duration of the stay — EUR 800

If we exceed EUR 15 000 altogether, we will have the pleasure to invite you to a preview in Rheims or Paris in the presence of Soggy.

You will be able to check the progress of the project on this page or on Soggy’s Facebook page : https://www.facebook.com/soggyband

To all records collectors friends, please note the indicative value of unsigned copies of the records (source : Discogs / Near Mint) included in the packs/rewards from 8 to 13:

And the value is going up!

WAITING FOR THE WAR PACK : A big thank you on our Soggy Facebook page + digital version of “Waiting for the war” (1980 version from The SLOG 2012 album release) + pack 10 photos of the shooting on location (rehearsals in LA, concert Hard Rock Hotel in Las Vegas)

47 CHROMOSOMES PACK : + digital version of 47 Chromosomes (1980 version from The SLOG 2012 album release) + your name in the credits of the film DVD 26’ minutes edition 26' special ‘Beb and The Shrine in Las Vegas” + pack 20 photos of the filming in the USA (repetitions in Los Angeles, concert hard rock hotel Las Vegas)

JOIN THE PARTY PACK : Previous rewards + DVD 26’ minutes edition 26 'special ‘Beb and The Shrine in Las Vegas” + invitation to the Premiere in Rheims or in Paris (travel expenses not included)

YOU ROCK PACK : Previous rewards + Waiting for the War T-shirt

KILLER 2016 PACK : A big thank you on our Soggy Facebook page + digital version of “Waiting for the war” and "47 Chromosomes" (1980 version from The SLOG 2012 album release) + pack 30 photos of the shooting on location (rehearsals in LA, concert Hard Rock Hotel in Las Vegas) + 1981 original Soggy Concert Poster + DVD 26’ minutes edition 26 'special ‘Beb and The Shrine in Las Vegas” + invitation to the Premiere in Rheims or in Paris (travel expenses not included) + Waiting for the War T-shirt + Soggy T-shirt with the cover picture of the 7” single on the front + Soggy T-shirt with Soggy pic from 1979 on the front and Soggy logo in the back + CD Soggy USA 2016 + signed 12” Silver vinyl edition 2016