Support the edition of my first book "Bikers MC", an intimate dive into their double life.. 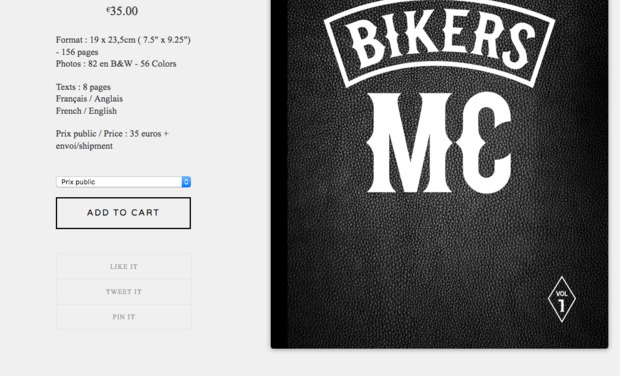 This book shows a social aspect of the world of bikers. A world which is communal and yet impermeable from outsiders . Bikers want to be free, without constraints .. but they are governed by drastic internal rules. MCs easily compare themselves to masonic lodges and adopt military rules.
Being part of an MC is a real commitment.
There are many limitations, especially when you're at the bottom of the hierarchy.

In this project, I emphasized photographically the classical image that these bikers convey when they’re with their biker family, but also, the huge contrast with their everyday life projects

Although some MC members might seem to live a marginal lifestyle, for the most part, they are actually integrated fully into the mainstream of society. Many MC Bikers have, in addition to the singular life of a MC members, a quite regular family life, a job and career or at least they are looking for one. Thus, the modern MC Bikers is no longer completely on the margin with society.

Even if he still has a fierce desire for independence and a spirit of rebellion, behind the beards, shaven skulls, tattoos and jackets which give them the sometimes disturbing look, they are mostly people very calm who adhere to a peaceful existence. Officials, executives, workmen etc ... form the biggest part of the MC Members . Few bikers make a living from a club income.

Their belief in the MC Brotherhood is what characterises them most.. If all bikers are in solidarity with each other, the MC Bikers consider the other members of their MC as brothers.

This notion of respect, like fraternity, is their primary value. They respect all individuals. They live their passion, their ideal, their philosophy without asking anything from anyone. They are bound to ideology of respect at all cost to their Brothers! Any breach of this rule can be considered a provocation or even an aggression. Some of them and especially the 1%er can then react with extreme violence even at the risk of putting themselves in danger!

The fundamental difference between MC clubs and regular clubs is notably in the recruitment of their members. In a MC, the rules of life, especially the solidarity in all circumstances between brothers require a progressive integration of new members.

In regular clubs such as the HOG ( Harley Owners Group ), there is no selection or co-opting, there is only one rule: to own a Harley and pay the yearly subscription fee to the HOG which belong to the Harley Davidson.

The concept of 1% outlaw motorcycle clubs originates from the existence of motorcycle clubs that do not comply with the established standards and norms of society. This « gang » notion was exaggerated by a journalist after the coverage of a riot which took place in Hollister California USA, in 1947. This riot inspired the movie « The Wild One » with Marlon Brando. After that event, 1% of the bikers, mainly MC Bikers were considered as troublemakers, lawless, drunken, filthy bands, rebels versus the 99% of regular bikers. Today, only very few MC Bikers wear the diamond patch with the inscription "1%er".

All black and white photos were made in the Club Houses .. Same lighting, black curtain background, 100% Biker.
Facing the camera, they quickly took a pose, rolled up the sleeves, and even undressed to show their tattoos, picking up baseball bats, knives, brass knuckles, some even weapons .. Why ??? because they want to show the image of bad boys to the public.
I photographed a second time the same person, but now in color, .. with the same lens ... and the same frame.
I did this to increase the contrast between their two parallel lives, which nonetheless intersect for a certain time and then break apart again.

Photo-reporter for nearly 15 years in the 80/90, Biker forever. I decided to re-invest in brand new digital cameras after a twenty years standby, I devoted to the photography business and the photographers .. creating Photo Agencies, Start-ups.
I have taught during 10 years how to build up « reportage features » and trained many renowned photojournalists at the School of Journalism in Paris and at the University Paris VII ..) With this book "MC Bikers"  I wanted to investigate a world that is like me, decided above all to safeguard a share of freedom, respect, sincerity and friendship.

I need your support to ensure the effective release of this book. This book is composed of 90% of photos and requires the best quality of printing.

This book will only be done if we reach the goal together ..

A second volume will come to live if this first volume is financed, .. even exceeded ... and this, because of your help...

No worries, if you participate and the 9000 € are not reached, you will be re-credited with the totality of your contribution.

What will the collection be used for?

Your support is essential to guarantee the effective release of the book but especially the best possible quality of printing for this photographic book.

The 9000 €  will finance the graphic design and printing.

Over 9000 €, the extra funding will  help me to finance the production of the 2nd volume of the MC Bikers, and for sure an exhibition where you will be my V.I.P guests.

The funds collected on this platform will be wired to Pierre Pankotay's bank account to pay the graphic designer and the printing of the book.

To give life to this book...Thank you so much for your support !

By participating in the funding of this first volume, you have access to a series of advantages such as: :

-  A discounted price  at 30 euros all along the funding period .

- Some compensations will be available only during the funding

- The availalbility of the book will be: 30 days after closing the funding period

TECHNICAL ASPECT OF THE BOOK:

Available for purchase on : Amazon.com as well as specialized bookstores, motorcycle festivals...