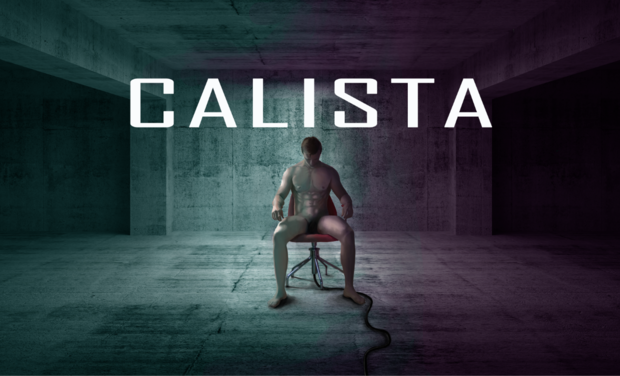 2083. A cybernetician has just created Calista, an android in the image of man. As he tries to equip his creation with artificial intelligence, his experiences will lead him to think about what makes the human brains so specific. In parallel, 5 mini stories happening in different places and times will lead to the conclusion of his researches.

The idea of ​​this short film came from the desire to compare the capacities between the Man and the machine and revolves around the recurring questions: What makes us different?

It also indirectly addresses the theme of perfection as sought by man, represented through this incessant quest to create a machine in our image by removing any notion of default.

The title draws on this theme, Calista meaning "the most beautiful" in Greek and referring to the spirit of perfection.

The desire to create a narrative also on the human retranscribes through the five mini stories incorporated in the narrative, in which are represented different situations and show our difficulties in living them.

More than a narrative I see this short film, in the content more than in the form, as a poetry, a fable, a contemplation of his creation.

In view of the theme and this desire to represent the man as a whole through different times and places, It seemed obvious to me to make a film in several languages, including English for its universal side, but also French , Italian and Native American.

The visual aesthetic has an important place in this short film whose setting and costumes will contribute greatly. These are carefully selected to represent to the best the different eras and give a sense of total immersion.

From a technical point of view, the scenes of the android will have slow and fluid camera movements to emphasize the perfect side that the cybernetician tries to obtain and to transcribe this poetic aspect. On the other hand, the scenes from the mini-stories will have less fluid shots using handheld camera and accompanying shots to emphasize the imperfect and non-smooth side that the human being and life may have.

The gestures, the lights, the shots and the music will be done so as to sublimate the story.

WHEN IS IT EXPECTED ?

We plan to shoot a week in June / July for a broadcast at the cinéma des galleries in November. Nevertheless, we have already shot a scene that needed to be closest to winter.

Coming from the comic strip and illustration he studied at St Luc, Steve wrote and directed his first professional short film. He is passionate about art and practice it in different forms such as drawing, music, acting and now realization and scripting that he developed as an autodidact. He participates in different cinematographic projects of different scale and in different roles such as: Assistant director, stage manager, concept artist and storyboarder ...

After graduating from the IAD section images in June 1991, Aldo began his career as a camera assistant in Italy. This allows him to participate in several feature films including: "Beauté volée " by Bernardo Bertolucci, "Parenti Serpenti" by Mario Monicelli, "Mario, Maria, Mario" by Ettore Scola or "The Ninth Gate" by Roman Polanski.

After these shootings he decided to return to Belgium as director of photography. From 1998 he began to accumulate clips such as: Tarmac "Our Epoch", Tahiti 80 "Heartbeat", Alizée "Le vent d'Alizée", Polo "jonquilles", Lara Fabian "si tu m'aimes", Patrick Fiori "Elle est" "Prenez moi" ....

Aza Declercq is a Belgian actress, with over 22 years of professional experience in the field. She studied drama at the Lemmensinstitute of Leuven, continued her studies in Classical and Modern Dance at the School of performing arts/Conservatoire, Antwerp, and took classes at Cours Florent (Paris)

Aza acted in many TV series, feature and short films. Amongst them she played a small part as the 'prostitute' next to Leonardo di Caprio in 'Total Eclipse', the 'Mother' in the Academy Award Nominated Short 'Fait d'Hivers' and 'Janice' in the French production 'The things they left behind', which won the First Prize at the Festival Européen du film fantastique de Strasbourg. Currently she played the part of the Italian mother "Maria" in the feature film 'Patser' (directed by Adil El Arbi and Bilal Fallah).

Gauthier went to Paris to do his acting training at Cours Florent, which he chose to follow exclusively in English, being the program and course structure that best met his expectations. Back in Belgium, I began his career with appearances in short films and TV series including Clash of future, Champion and Mom or Dad who will be released soon. He is currently working on a project with two international stars.

Natasha started her artistic career in 2002 as a drama class. It is only later between 2006 and 2014 where she accumulates figurations and small role for the show "ça va se savoir" that she meets a casting director who proposes her to pass the casting of "Black" of Bilalle Fallah and Adil El Harbi, who has a second role.

David begins his acting training after high school with a preparatory year for entrance exams. In 2011, he joined LASSAAD International Theater School in Brussels. These two years will mark a major turning point in his apprenticeship as a comedian. He continues his apprenticeship, and enters at 22 years old at the Conservatory of Mons (Arts2). He is notably directed by Jasmina Douieb, Michael Delaunoy, Lorent Wanson, Pascal Crochet, Laurent Flament, Manu Mathieu ... In 2015 Sylvie Landuyt takes her to Japan for a collaboration with students of Arts2 and students of the university from Kinki to Osaka. He graduated from the Conservatoire with great distinction.

In January and February 2017 he plays in Clément Thirion's "Fractal" (Kosmocompany) at the Balsamine Theater (Brussels), at the Namur Theater, and at the Mons / Mars Theater (Mons Arts de la Scène). Since the end of 2015, he has been working on his first play, Jungle (s). In April 2017 he has a writing residency at CED-WB (Center for Dramatic Writing - Wallonia - Brussels). Last summer a reading of his piece was performed at the Théâtre des Doms during the Avignion Festival.

Very young, Charles enters the School of Actors of the Conservatory of Liège in 2008. During his training at ESACT from 2008 to 2012, he touches on several styles of acting: indoor acting, method "actor studio", acting face camera, farce, ... He works with several directors: Françoise Bloch, known for his show "Money"; Sylvain Creuzevault, known for his show "Our Terror". In particular, he plays Patrick Bebi and Alexis Garcia in "Grève 60", a project around which he and three of his comrades will co-found Cie Art & tça in February 2012. At the end of his school career, he creates as part of the Solos / Carte Blanche of the ESACT the show "Nourrir l'Humanité c'est un métier" which he will produce later with the company Art & tça in co-production with the National Theater of Brussels. At the end of his studies, he trained in production and theatrical distribution, with Théâtre & Publics. Today, Charles has more than 200 performances under his belt with "Nourrir l'Humanité c'est un métier".

Passionate about theater and cinema, Sarah has been taking acting classes for 2 years and has been playing classical piano and dance for 7 years and is part of Joëlle Morane's troupe. What she likes most: getting roles for artistic competitions (mimes, impression, dance) and loves to play characters. In 2016 she was a finalist of Belgium's got talent on the VTM channel. In 2017, she participated in the show Super Kids on M6.

As you know, making a movie is expensive and it is difficult to be produced when you are a newcomer. Cinema is a profession where you have to prove yourself, which is sometimes paradoxical for a young filmmaker who does not have the means to carry out his projects. At first I decided to self-produce for 5000 €.

As time passes, the scenario has evolved, ambitions and budget too. Given the many sets, costumes, comedians and the desire to make a film of the best possible quality, we realized that it was no longer possible to make this short film without crowdfunding. And that's why I need you!

To be able to carry out this project, we need at least 10 000 euro to which would be added the 5000 euro of personal investment. With this sum we can defray the actors and the technical team at the minimum and have the rental of technical equipment, costumes, makeup, as well as the creation of certain sets.

We aim, with your help, additional levels of 15 000 and 20 000 euro to be more comfortable and have less limit in the costumes, make-up and decorations. Also we will be able to pay the team the fair value of their work and dedication.

HOW WILL THE BUDGET BE DISTRIBUTED?

With this sum is the minimum with which we can make the film by defraying everyone to a minimum.

With this sum we will be able to get a better quality technical material, a post production more accomplished, more provided decorations and went further in the costumes and makeup. We can also a little better paid the people working on the project.

With this sum we will be able to have technical equipment of top quality, a post production of the fires of god and to pay the persons working on the project as it should be. We will be able to also register our short film in several festivals and finally to have our star on Hollywood boulevard ... Well... Maybe not ...