For my next photo-workshops some more cameras are needed to lend to the young participants. Please contribute! 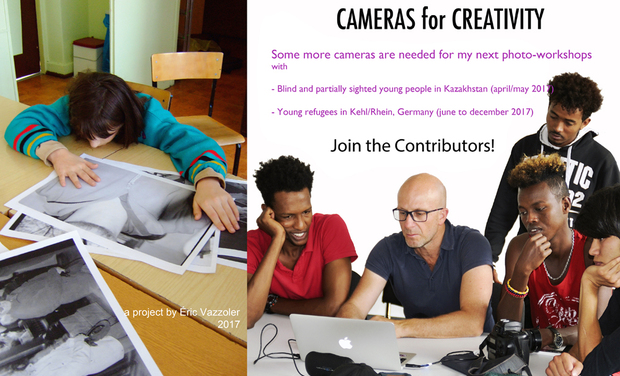 In the course of my numerous educational photo-projects* for young people wherever they are, and after the success of the workshop I led in Donetsk** in the Donbass at war (2015), I am going to realize two noteworthy workshops in 2017 :

-  One with blind and partially sighted young people of Kazakhstan

-  The other with young refugees, who fled the conflicts in Syria, Irak and Afghanistan and are now living in Germany (Kehl/Rhein).

These two workshops will definitely take place during the upcoming spring.

But one of the conditions for their success, is to give all the participants, the possibility to take their own photos (photography as a free form of expression). I don't want them to be accompanied by adults or to wait for a camera too long.

For this reason I would like to purchase some compact, hybrid or bridge cameras ( with their cover, memory cards and additional batteries).

Both projects will be published on a blog*** and on social media day-by-day.

Two short films will be produced and posted on You Tube afterwards.

** This project was already financed through a fundraising on KKBB

- I will deliberately not mention which cameras, I am going to purchase with the money you donate.

Guillaume, poly disabled child, participant to my numerous photo workshops. The picture to the right has been drawn by him (2005).

The money that will be raised, will be fully dedicated to buy some (five or six) new hybrid, bridge or compact photo cameras with their indispensable accessories (memory cards, batteries and cover...).

The bill will be published on this page.