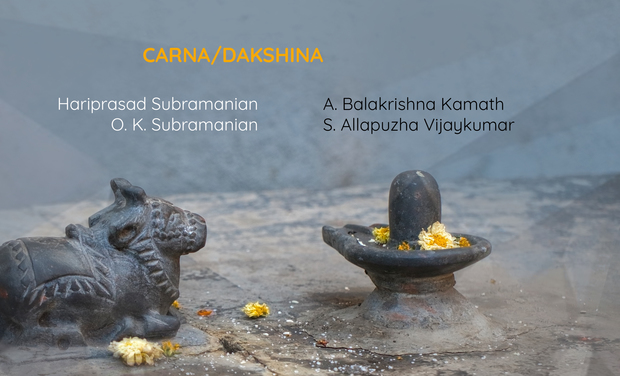 Carna/Dakshina is a musical offering... In an Indian way!

This musical project combines 4 musicians of the Carnatic tradition renowned in the South of India and more particularly in the state of Kerala.
I had the opportunity to work with 3 of them during the project "Madhura Sopnam", which permitted the meeting of traditional musicians from Kerala with French musicians and improvisers. After a decade, I thought about gathering some of them in an unconventional configuration, with the son of the Nāgaswaram player O.K. Subramanian, Hariprasad, that became today a leading figure of South Indian flute.

It's a meeting of 2 nearby musical practices, as the group is composed of a double duet, each one including a melodic wind instrument accompanied by a percussion. Nāgaswaram (carnatic oboe) and Thavil (percussion), on one hand, are more associated to the temple ceremonies, more often played outdoor, in a form of declamation, while the Venu (carnatic flute) and Mridangam (percussion), are played in more intimist, indoor forms.

The idea of gathering all these instruments was to play with the various subtleties inherent to these various styles, practiced upon a common dialect. The result is striking, virtuoso, jubilant, fascinating, following the example of this music which deserves to be more known by the western listeners.

The fund-raising on Kiss Kiss Bank Bank will allow to give life to this project of album under physical format and in streaming (recording in a studio in Kerala, mixing of the recording in France, realization of the artwork of the cover, the printing of the covers and disks pressing)

I shall perceive the entire collection to be able to finance the whole project.