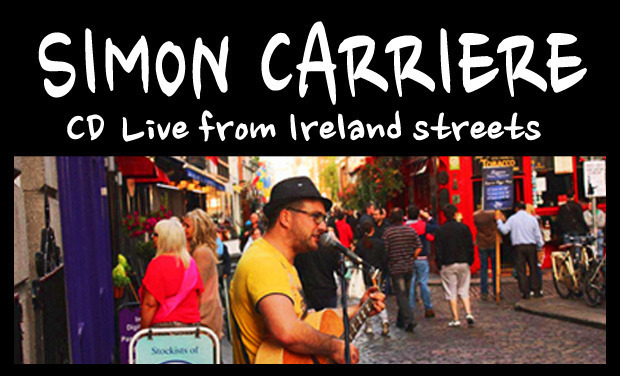 In september 2013 I hit the Irish roads with my Magic Volkswagen camper van to play in the Ireland's streets and record my first live album... to catch the magic moments and the best covers versions I've been perfomed.

It's been few years that I experimented strret music in the parisian ssubway, on a big european rodtrip in 2010 and scandinavian roadtrip Paris-Oslo in 2012.

With Ireland I experienced to sing exclusively in english, that was a big challenge for me and one of my best street music experience... that gave to me an unexpected energy to give the best of myself with the music.

After my come back in Paris, I started a long work to select the best tunes, one of them can be listen on my Soundcloud page (https://soundcloud.com/simon-carri-re), here is my first selection that can be evolving with your special requests...

Let s get it on (Marvin Gaye)

Lean on me (Bill Whiters)

I Will Survive (Gloria Gaynor)

Nothing Else Matters (Metallica)

I put a spell on you (Screamin'Jay Hawkins)

Many Rivers To Cross (Jimmy Cliff)

This CD needs to be produced with your help and support, the budget is 4000 euros, I need you for the first steps...

In supporting this production, you will also encourage me to realise one of my dream : to go in US and Canada for a new experience with this CD that would my best card to accompany me for this next adventure.

A little help and a big thank you !!!

The CD 'Live from Ireland Streets" deliver at your adress with a kind word... (Worldwide, except France)

The CD 'Live from Ireland Streets" + Bonus audio CD and DVD for KissBankers deliver at your adress with a kind word... (Europe, UK, Ireland, USA only)