Lemurs are primates whom we can meet only in Madagascar. Their future is in our hands... 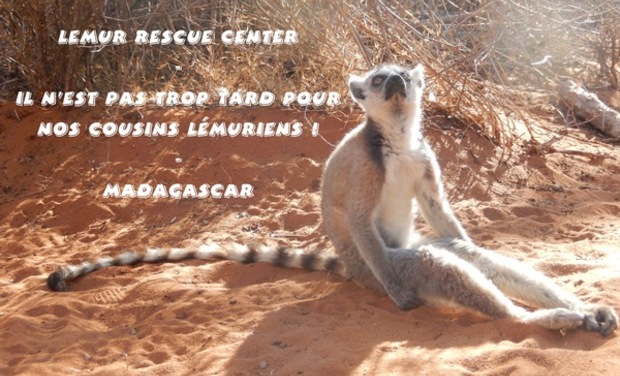 Reniala is a Franco-Malagasy environmental NGO whose primary activities take place at the Reniala botanical and ornithological réserve, 600 meters from the village of Mangily in the province of Tolara, Madagascar. The reserve consists of unique spiny forest vegetation, found nowhere else in the world except southern Madagascar. The NGO operates a conservation program to help the ring-tailed lemur (Lemur catta) Madagascar's flagship lemur species, found throughout southern Madagascar and nowhere else in the world. The conservation status of Lemur catta has recently been upgraded to Endangered by the International Union of the Conservation of Nature (IUCN).

Why such a project ?

Lemur catta is a well known emblem of Madagascar; however this lemur species is seriously in danger of extinction due to massive deforestation throughout its geographic range, hunting for the illegal bushmeat trade, and capture for the illegal pet trade. Populations of ring-tailed lemurs have become extinct in some regions of their range, due to the activites mentioned above, and most populations are now very small. Thus, concrete and sound scientific and conservation actions must be implemented quickly if ring-tailed lemurs are to survive, and this is why the NGO Reniala has been involved in this conservation project since 2011. The NGO has constructed a conservation center at the reserve site, as well as research on Lemur catta. The Lemur Rescue Center at Reniala is the only  center in Madagascar that is devoted to rehabilitation of ring-tailed lemurs rescued from the illegal pet trade.

A story of collaboration

This project began with the close collaboration between Madagscar's Department of Forestry in Toliara and the NGO Reniala. Reniala offers the best possible accomodations for illegally owned ring-tailed lemurs that are seized from hotels and private homes by the Forestry department and brought to Reniala. The NGO has built the Lemur Rescue Center with the help of the conservation branch of the French zoo Touroparc. Reniala operates as a scientific committee based on conservation activities, and collaborates with recognized lemur researchers, international veterinarians, and personnel from the Forestry department who monitor the center's activities and participate in decision-making. Our most recent partner is the American NGO 'Lemur Love', and the Madagascar Ministry of Forests has recently granted Reniala national accreditation as a recognized lemur rescue and rehabilitation center.

How does the Lemur Rescue Center operate?

In most cases, the lemurs housed at the Center were subjected to very difficult lives before they were rescued (abuse, small cages, poor food quality). Therefore, the work at the center is focused on teaching the lemurs how to live in a natural setting and be part of a social group. Specifically:

• Lemurs are socialized into groups of between 5 and 22 lemurs, where females are dominant (as they are in the wild)

• The rescued lemurs resume a natural diet (fruits, leaves and flowers obtained from plants in the Reniala reserve) in addition to provisioned foods (fruits and vegetables) -learn or re-learn natural ring-tailed lemur behaviors such as appropriate anti-predator reactions and calls, learning to forage and find nutritious food, grooming with other lemurs in the group, playing with other lemurs.

We have successfully accommodated 24 lemurs, including one large group of 16 which are healthy and able to reproduce.

The Lemur Rescue Center also works with local people in the region, offering workshops and special events. We emphasize the importance of preserving Lemur catta, an emblem of Madagascar, and not hunting these animals. We also work with local people on conserving the dry and spiny forests, and developing conservation awareness. Many activities are conducted with students from the nearby village schools.

The ultimate goal of the center is to conduct ex situ conservation, i.e. to translocate the social groups of Lemur catta into protected reserves that have the same ecosystem as at Reniala (dry and spiny forest). Scientists will monitor the groups and collect information on their populations and adaptations to the forest. But this goal requires more scientific research, sufficient funds, as well as national and international partnerships. At the same time the Lemur Rescue Center can continue to house additional rescued lemurs and continue the rehabilitation work.

On the beach to Anakao, a still very too present scenario...

We need your help !

All funds that we raise with this initiative will help with the daily functioning of the Lemur Rescue Center and care of the lemurs  (3000 Ariary ~ 1 euro).

If the total funding goal is exceeded, the extra funds will be used for activities such as scientific research, publicity of the center to increase the number of visitors.