"The end of a story is the beginning of another" 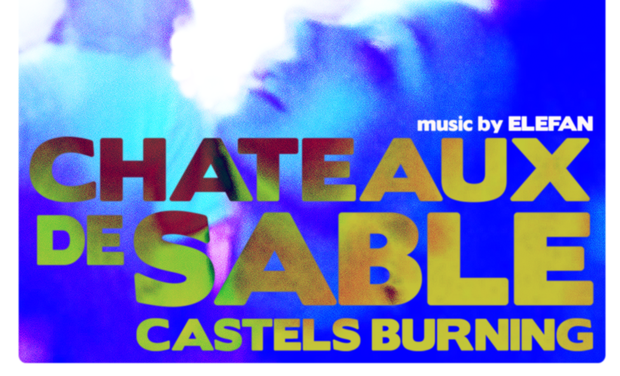 A couple of young adults find themselves suddenly confronted with a supernatural phenomenon that will devour the very fabric of their reality !

WHAT "CASTELS BURNING" IS ABOUT ?

A couple with a big "C", the one that lasts and overcomes obstacles even through the difficult moments.

The short film/clips explores the subject of the couple's bonds of love but also between people living in a modern society going at full speed, increasingly dehumanized, where through individualism, some end up forgotten, lonely.

"CASTELS BURNING" is a parable, a story that seeks to reflect on our contemporary world and the place of the human being in it.

Act I opens with a contemplative portrait of the "Couple", played by Colline Libon and Benjamin Boutboul. Leo and Sacha escape from their daily routine for a well-paced underground party that will gradually turn into a strange one.

Act II resumes at the first light of dawn, they trying to wrap their heads around the "Event" that's now wreaking chaos and madness in the city.

Finally, act III will embarked them on a deserted road movie where their love for each other will be tested.

All initiate with the idea of making one music video when I met ELEFAN for the first time.
After which they send me a few track to listen to and liked their music so much that one video was just not enough ! What was supposed to be a one shot project became so much more.

These 3 acts are interconnected by the story but also by the soundtrack signed by ELEFAN which presents us three original titles: "SIX", "BELL" and "ITINERA".

ELEFAN is a Belgian duo formed by Brieuc Angenot and Lionel Polis.
It is through their style, mixing electronic and classical symphonic music that ELEFAN creates a mystical atmosphere that reinforces the fantasy tone of "CASTELS BURNING".

The first act will stream on YouTube starting January 2020, on this mark the occasion, ELEFAN will be throwing a party for the release of the second EP, where the entirety of "CASTELS BURNING" will be screened and with the music played live (limited entrances) !

Then, the second act on February and the third in March, both on the same year.

Sébastien Meulenbergh, I am producing & directing this projet.

... but not on my own !
Dragan Goolaert & Anna Galy, of LIQUID SKY Productions, will direct act I.

The production is taken under the wing of "Les Ateliers du Scarabée - a.s.b.l." created by Samia Boujhar.

Samia is a renowned Belgian designer, working for both RTBF and RTL-TVI, and many others. She is also the president of "L.A.S." and it is thanks to her that this project will also be able to benefit from an aid for audio-visual creation and sponsorship which will help finance part of this production.

The philosophy of "L.A.S." is to promote the Belgian talents of today and tomorrow, whether they come from the plastic arts, design, craftsmanship, or in this case, music with ELEFAN !

That's all about the project.

WHY MAKE A DONATION?

A corner stone of this project is collaboration ! Bring people together around a subject that speaks them. It's important for us to work with the music of ELEFAN but also that we had a message to pass on. This why we are all gathered to invest our time and expertise to bring-up a project of high-end value, for us but also for you.

By contributing to the financing of "CASTELS BURNING", you're give a chance to 5 directors, in their twenties and thirties, to accomplish a project with a bold vision !
A chance for us to work with technicians of film industry.A chance for a promising belgian band to make an early mark in their career.

It's from these ideas that the project "CASTELS BURNING" was born.

HOW WILL THE DONATIONS BE USED?

We have estimated a budget of 8250€, which will cover the rental of cameras, lighting equipment, food, logistics costs and other expenses inherent to a film production.
Most of all, we would like to pay those who are working on the making of this project, creatives (actors, director of photography, make-up artists, etc.) and technical (camera assistant, gaffer, sound engineer, etc.).

Here are the details:

The whole team of "CASTELS BURNING".