April 4, 2012, Dimitris Christoulas. May 1st, 1944, Georgios Krokos. Two eras of crisis. A documentary on self-sacrifice and solidarity. On the love of ideals and history. On heroism in everyday life. A mural of modern Greece. 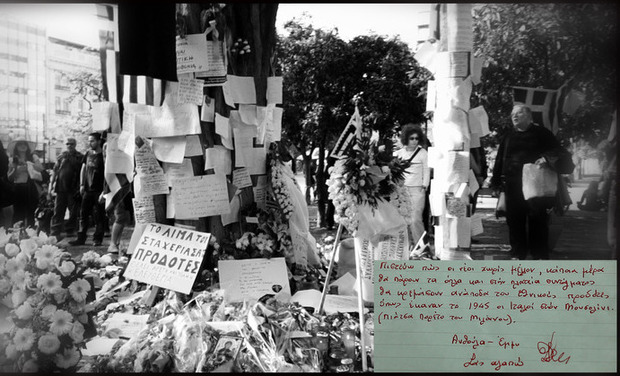 During recent years in Greece, the number of suicides has risen. This rise is not due to psychological problems but mainly financial that reach an impasse due to the crisis. Among those suicides was one by a retired chemist who took a gun and shot himself in front of the Greek parliament even though he had no financial problems. As he wrote in his last note, with this act he was trying to "awaken the living".

Through the film we discover the lifestyle and social problems that led him to choose this end. During the German occupation in Greece in World War II, many people resisted by joining various organizations. There were also though a few of them that resisted based only on their individual beliefs. Sooner or later those beliefs led them to prison and death by the German troops. One of them was a teacher of 39 years of age who paid with his life his ideas about freedom. What were the living conditions during that time that pushed people to extremes and self-sacrifice?

The funds will be divided in three parts and used as following: one third of the gathered amount for acquiring archive material for the part of the documentary referring to the life of George Krokos who lived during the German occupationq one third will cover the crew's travel expenses to Ikaria, Evoia & Karditsa, destinations which will be visited in order to re-trace the origin and personal history of the two menq and lastly, for the post-production processes (color correction, sound mix, film print).