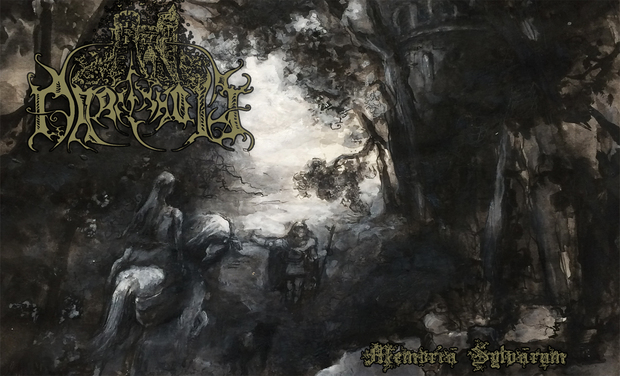 Darkenhöld (Medieval Black Metal) offers atmospheric and engaging music. After three releases released since its formation in 2008 the group then concentrated on the preparation of a fourth album inspired by sylvan and legendary theme "Memoria Sylvarum". He recounts the various wanderings of a lonely man in the forests of southeastern France.

This album "Memoria Sylvarum" is the fruit of a work of composition of Aldébaran (electric guitars and acoustic, bass, synth, choirs, flute) matured patiently and fervently for three years, it was then favored by the lyrics of Cervantes (vocals), the Aboth's drums, and the contribution of Aleevok (bass) and Anthony (guitar).

The album was mainly recorded, mixed and mastered in the studio of Aldebaran the Cryptic Studio (except the drum sounds that were performed at the Coxinhell Studio and the singing at the Altherax Music) conferring a singular and authentic sound . The cover is a painting made by Claudine Vrac who had already worked on the previous albums. The tracklist for this 4th opus is as follows: - Sombre Val – La chevauchée des esprits de jadis - Ruines scellées en la vieille forêt - A l'orée de l'escalier sylvestre - La grotte de la chèvre d'or – Sous la voûte de chênes - Clameur des falaises - Errances (lueur des sources oubliées) - Présence des orbes

Guillaume Vrac (composer / guitarist of the group) will receive the funds, they will be used to finance the physical release of "Memoria Sylvarum" as well as the creation of a t-shirt in its effigy. Thank you in advance for your contribution! You can follow the group's news on our Facebook page: https://www.facebook.com/Darkenhold/