Support the post-production of Dawrati - a documentary aiming to break the silence and stigma around periods in Lebanon! 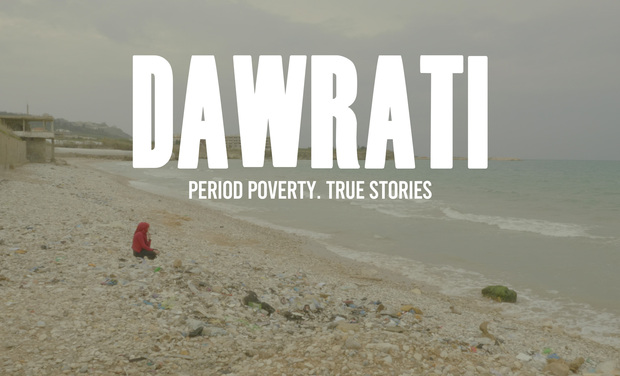 By creating this documentary together, we can break the silence!

If you were assigned female at birth most likely you will get your period every month for forty years no matter where you are from, how you identify or what access to resources you have.

Newspapers, old cloth, tissue rolls, paper, used pads, etc...This is what more than 50% of women suffering from period poverty in Lebanon are using during their menstruation.

In a region were gender inequality is pronounced and women’s health is an ongoing taboo, period poverty in Lebanon is now becoming an urgent health crisis. In the past year Lebanon has dealt with a Revolution, an explosion, political instability and is currently struggling with it’s most severe economic crisis in history.

For years, Lebanon has been viewed as a relatively stable country in the region. Recently the country’s economy has collapsed due to a mix of government malpractice, economic instability and international interference. The existing crises has been compounded by the 4th of August explosion which caused hundreds to lose lives, thousands of injuries, and 300 000 people to lose their homes. In a Beirut struggling to rebuild, everyday products have tripled in price in the last year, and vulnerable groups are now finding everyday necessities unaffordable. Furthermore in many of the areas affected by the explosion, people are unable to access hygiene, and basic human amenities. It is in this context that we are seeking to address the issue of a valid study of period poverty.

Period poverty affects both women’s physical and mental health! The lack of education on women’s health, causes extreme problems like women missing opportunities such as going to school or to work, serious health issues due to lack of hygiene or avoiding seeking medical care for small issues that then become more severe, leading to illness ,depression, fear, and in some extreme cases suicide. Many women will live all their lives with shame and misunderstanding about their own bodies. But this can be changed.

By creating this documentary together, we can break the silence!

Since its launch, Dawarti (menstruation in Arabic) has helped more than 5000 women across Lebanon, including Lebanese, refugees, migrant workers and the LGBT community. With the support of Nana, 2 million pads were distributed to women victim of the blast! Numerous campaigns were also launched to normalise the conversation around period. Dawrati is now taking a step further in the fight against period poverty by producing a documentary.

“DAWRATI” Is a 20 minute documentary directed by talented director Evelina Llewellyn. It is structured around seven video portraits conducted with people from a wide variety of social and geographic backgrounds, giving in-depth view of the different ways in which period poverty impacts Lebanese women.

Far from stereotypes on women in the middle east, Evelina's documentary will be honest in its account, presenting the subject passionately and from a modern feminist point of view. By keeping a strong Lebanese artistic identity and by working with an all female Lebanese team, Evelina wants to highlight the relationship between orient and occident and modernity and tradition that is so personal to Lebanon. Furthermore she wants to show the beauty in menstruation, and has adopted a cinematic, intimate and spontaneous approach, far from the medical and educational women’s health documents we are used to seeing.

This documentary's aim is to give a voice to these women, and through relatable and real stories, break the silence on periods in Lebanon. These series of intimate and inspiring portraits will document the daily lives and struggles that come with being a women in Lebanon. Furthermore by speaking truthfully about periods, these stories will break the stigmas and taboos, and give a Lebanese but also universal, portrait of menstruation.

Evelina and her all female team (Magali Soueid as assistant director, Lea Sour as sound engineer, Chloe Bou Mehri as production, and Assil Khalife as second assistant) have finished filming the documentary and are now entering the post-production phase - and this is where we need your help! By helping us finance this important project you will not only be helping us finish this amazing and important documentary but you will also be contributing in employing a young Lebanese female post production team (editor, editor assistant, sound mixer and composer) in a country where more than 50% of youth are unemployed. If we reach a higher amount than 3500 euros, we will use the money to hire a mobile screen and tour the documentary in March to the most remote areas of Lebanon, creating an all inclusive and educational event around the project where women can have a safe space, conversations, debates, distribution of hygiene kits etc... All in all you will be helping women all around Lebanon - and all around the world - by breaking the silence. Period.