Computers for poor children in a Rwandan school

Knowledge is the real capital of those who have nothing Please help our children to learn computer sciences ! 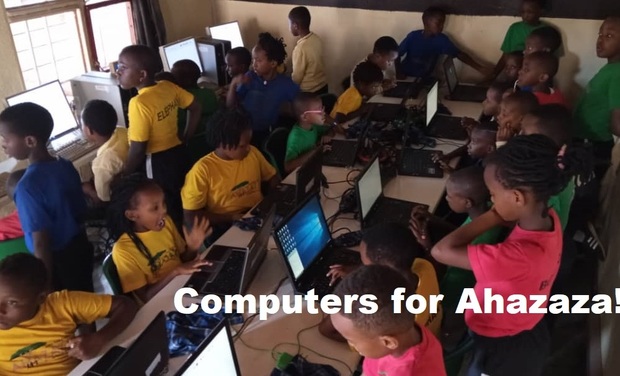 Computers for poor children in a Rwandan school

AHAZAZA Independent School was founded with the initiative of a small group of people living in Muhanga in October 2005 to provide education of high quality to children coming from rural areas. The school opened in January 2006 with only one primary class with 17 students, five of which from poor families with a scholarship. After that, the school built two classes, an office and some latrines. It has been legally registered as a non-profit organization recognized by  the ministry of education in Rwanda.

Today, the school has 439 students, 89 of which come from poor families and benefit of a sholarship. The school recently opened a day care centre (1-2 year olds).

Currently the number one school in Rwanda (in academic performance) according to the ranking of the ministry of education, Ahazaza runs a trilingual programme where children learn in both French and English besides the mother tongue.

Ahazaza’s scholarship programme since its inception has helped more than 300 poor children to access good education. Some of our first students have successfully been accepted in universities in Asia and Europe.

1.3 The objective of the project

The AHAZAZA Independent School is in need of new computers to replace the worn-out and malfunctioning ones. Moreover, we do not have enough computer to cover our needs.

Ahazaza computer laboratory has 26 very old computers. Out of these, 16 are old versions of HP desktops, the other 10 are laptops. Out of the 26 computers, 6 desktops and 5 laptops no longer work. This leaves the school with only 15 old computers for the teachers to use to conduct computer lessons. On average, we have 30 children at a time during computer lessons which we conduct in the computer laboratory. Teachers almost need double the normal time they would spend if there were enough computers and each pupil had access to a computer. Moreover, the 15 old computers have to be shared between the teachers, some members of the school administration and then, the children. In the past, Ahazaza has had to borrow laptops from a neighbouring public school which accepted to help on a use-and-return basis. Whereas all government schools receive free laptops, even if we are an NGO with many poor children on scholarships, we are excluded from this assistance because we are a private school.

Solution (what will happen if the school gets the requested assistance):

The school needs 30 new laptops. This  assistance will mean that each child can access a laptop so that the teacher can save time and children can learn more conveniently and it will facilitate the teachers ‘work.

School’s contribution: the school can pay for maintenance costs as well as, internet and electricity (400 euros) related to the computer assistance. The school also employs a fully qualified computer specialist who is also a teacher.

The assistance you give will go a long way in supporting computer education in our school. We wish to thank you in advance for participating actively in making a difference in our children’s education here at Ahazaza. If you decide to fund this project, you will immediately be impacting positively  the lives of our students whose difficult work conditions and low skill levels would be greatly improved by these additional resources. You can be sure  that the assistance you give us will be well spent.

If the collected funds exceed the requested amount, first we would like to buy more computers for our children and teachers. With 5000 euros, we can buy 20 computers but with 7667 euros, we could purchase 30 computers! And we also need projectors for our teachers in classrooms. This will be of great help for us !

The funds will be deposited in the account of our non-profit organization and will be used completely and only for the realization of this project.

Our project is ready to start, as soon as we received the amount needed.

We sincerely hope and trust in your comprehension and generosity!