Thanks to your active support, "Disorders", the latest book by Antoine d'Agata will see the light of day produced by Voies Off Publishing. 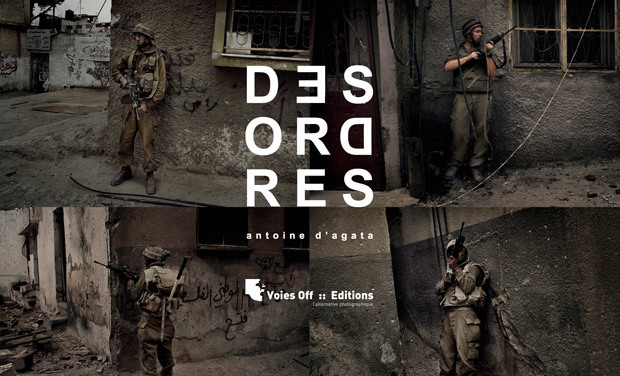 On the occasion of the 20th anniversary of Voies Off Festival, we are publishing "Disorders", Antoine d'Agata’s latest book. It highlights 20 years of his photographic work. A beautiful way to celebrate our parallels roads, and share this event with you.

“Confronted with a global ruling power that generates an inflation of stereotypical images, and with the multiplication of these images by cultural industries, facing a generalized obscenity, being / living has become the sole meaningful challenge; and the sole possible master piece can only be the perpetration of senseless acts.”

For its first edition in Arles (1996), Voies Off Festival presented the work of Antoine d'Agata, an unknown photographer based in Marseille. From the first meeting, we discovered the artist’s talent and deep dedication to his work, a dedication that he has been entertaining through a complicated relationship with the world and  photography.

That series of images, "Mala noche", photographs of a trip across the United States and Mexico, was quickly recognized as a major work, awarded the Voies Off Prize, while supported by famous French photo-editor and curator, Christian Caujolle, also the founder and director of the VU photo-agency (and gallery).

During the twenty years that elapsed between 1995 and 2015, Antoine d’Agata asserted his style, producing a succession of series in his very atypical way. A good deal of these works start from a documentary approach, with a definite “concerned” and militant slant: human migrations, wars, prostitution…

In 2013, the exhibition "Anticorps" (Antibodies) at the BAL gallery in Paris, as well as  a book of the same title published by Xavier Barral celebrated this stage of his career.

Antoine d'Agata is a member of the prestigious Magnum agency. He is represented by Les filles du calvaire gallery, in Paris.

All along these years, and his projects and trips, Antoine d’Agata has relentlessly tracked and documented situations of emergency. This documentary aspect of his work, a corner stone of his œuvre, has never been extensively displayed in any sort of manifesto book that would generate a better understanding of the meaning of his concerned commitment.

We would like to give this book a chance to exist. That is the very reason why we need you to show your own commitment and participation.

One of the core qualities of this book lies about fifty texts written by the artist himself, between 1995 and 2015. These texts illustrate Antoine d’Agata’s reflections on, and assessment of his photographic practice.

Many have had the opportunity to encounter Antoine d’Agata's photographic work, but rare are those who have been lucky enough to indulge in his writings.

:: Designed by Antoine d’Agata in collaboration with Voies Off

A NETWORK OF PARTNERS

Voies Off  is extremely grateful to the partners of the book :

THE 20th EDITION OF VOIES OFF FESTIVAL

Inaugurated in Arles, twenty years ago, Voies Off Festival aims to support emerging photographers during the Rencontres d'Arles festival. Voies Off Festival has offered an alternative approach and stage to emerging contemporary photography, its particulars, its evolutions, and its areas of resistance.

20 years later, to celebrate together this great anniversary, Voies Off is inviting Antoine d'Agata again in order to create an exceptional book, and to create an exhibition that will be one of the highlights of Voies Off 2015 Festival.

This renewed collaboration and mutual trust came as an evidence, we deeply and sincerely thank Antoine for his committed confidence.

Every year, at the beginning of July, Voies Off Festival during Les Rencontres d'Arles shares the best of contemporary photography during evenings of night projections in a historical setting.

Over time, Voies Off has become a signature name, informed and nurtured by its expertise and its experience of 20 years in the field of contemporary photography, its artistic choices and its achievements. The festival spreads a thought in constant motion which, thanks to the vision of the artists, attempts to decrypt our contemporary world.

Voies Off Festival is an alternative to as well as a complement of Les Rencontres d'Arles, a talent spotter and a mediator with a general public.

This anniversary edition will be marked by exhibitions, events, and night projections in the Cour de l'Archêché and the Place du Forum, at the heart of the city of Arles.

As one of the highlights of this program, Antoine d'Agata has been invited to design and curate an exhibition which will be presented at Voies Off Gallery, from July 6th until September 20th, 2015.

“I document what I live while I am living it, in a quasi impossibility to exist outside photography that has grafted itself on my fears and my desires, living off them like of some living flesh.”

Adrift since 1983, Antoine d' Agata photographs worldwide. Le BAL dedicated an exhibition to his work from January to April, 2013. In 2013, he also completed his first feature film, Atlas, his book Anticorps was published by Xavier Barral, and he received the Author’s Book Award at Les Rencontres d'Arles.

You can follow the progress of this project, get all the news and the first pictures at our “News” page on the Voies Off website.

Help us to make this project live !

DISORDERS :: A BOOK TO BE TOGETHER MADE

The sale price of this very beautiful book was set at a very affordable 25,00 € within the reach of both connoisseurs and amateurs, easy access to a major work. By this economic strategy, we want this book, published according to the highest standards of the trade, to be widely distributed. We also want to make Antoine d’Agata’s very words and thoughts accessible.

By participating in the financing of Antoine d'Agata's work with Voies Off become partners in a historical publishing adventure !

The strength of the operation is based as follows :

- The support of Magnum agency

- The great contribution of our printing partner Escourbiac,

- And the active participation of KISS KISS BANK BANK, a generous donor !

YOUR PARTICIPATION will allow us to complete the financing of the production costs of the book, and to propose this finished well-crafted and affordable book to a larger audience at a moderate price.

In case your support would exceed the required amount for the project, the surplus will be allocated to the improvement of the exhibition accompanying the release of the book during Les Rencontres d'Arles 2015.

1 postcard signed by Antoine d'Agata + 1 box of 10 postcards of VOIES OFF 2015 PRIZE selection + your name mentioned on Facebook and our website.

ANTOINE D'AGATA'S BOOK sent to your home once published.

The BOOK SIGNED by Antoine d’Agata - Limited edition to 100 books signed only.

A beautiful OFFSET sheet printed on both sides signed by Antoine d' Agata + 1 box of 60 postcards of the VOIES OFF PRIZE selection, 2015.

A special MEETING with the artist, along with VIP access to a debate around his book during Voies Off Festival in Arles (15 only) + the POSTER of the exhibition signed by Antoine d'Agata (150 copies only) + 1 box of 60 postcards of Voies Off Prize selection, 2015.

A beautiful OFFSET PRESS from the printing office, a unique, rare and precious object + 1 box of 60 postcards selected from the Voies Off 2015 competition.

PARTNERSHIP as a brand. Brand name will appear on the Voies Off Festival website with an active link to own website, and a “thank you” note.