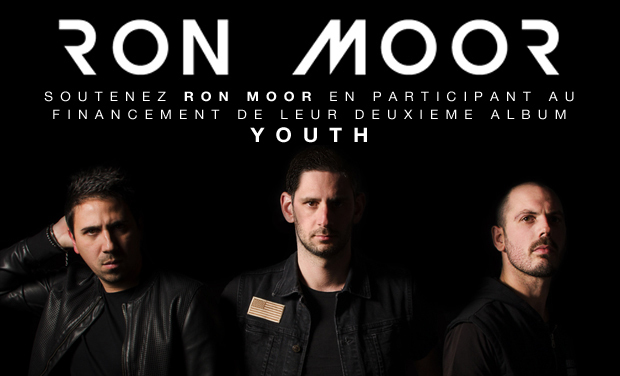 " Songs that beat, dancing melodies, choruses that call out " Zicazic " A very good album of electro pop / rock which imposes Ron Moor like a young foal with talent and certain inspiration " VS Webzine " Ron Moor reveals a propensity to lay effective choruses. We can't wait for next album! " TOP20 Rock albums / MyRock

Hi everyone, My name is Ron, and I'm the singer-songwriter for Ron Moor. In 2017, after an album to our credit and 4 years of existence, Ron Moor embarks on a new recording adventure. "Youth" (the name of the future album) will definitely be a musical turn in our artistic journey, while keeping what is the essence of Ron Moor: catchy melodies, efficient rhythm and an assumed taste for US rock. But to begin this new stage of our evolution, we need you. If you choose to support us, you will be given the opportunity to release our second album in the best possible conditions. Moreover, we really want to involve you in this project that is very important to us. In exchange for your involvement, you will receive both original rewards. But whatever your involvement, we are extremely grateful.

It begins in 2010 in Los Angeles. I compose and write the lyrics of what will become the Starshine album in my room on Sunset Boulevard. During the meetings in the City of Angels, I meet Michael Geier (producer for Lorde, The Lumineers, CeeLo Green, CrazyTown) and record with him some demos. The adventure begin…

Back in France, I meet Paul, solo guitarist, and Guillaume, bassist. Antoine (drummer) joined us very quickly, accompanied by Laurent, who put his talent as director and cameraman for the benefit of the band. This is the real start of Ron Moor. From these meetings is born the title We Are The Broken, accompanied by a self-produced music video.

In 2013, we release our first album, Starshine, with a national distribution and many dates to the key. Luc Tellier (Simple Plan, Marie-Mai) mixes the album. In 2014, we released a second single, Cast In Stone, embellished with another "home-made" music video. This single will be playlisted on more than 70 radios in France.

In the many concerts (more than 50 concerts in 2 years) in Western France, supporting artists such as Broken Back, we meet Jesse, who joins the crew for photos and live videos, and Thibaud as live sound engineer.

In 2016, Paul and Antoine leave us to sail to new horizons. We then began the creation of our second album "Youth". As such, Jérémy (drummer) joins us. Jeff Ferrand joins the team, working on the mix of this new opus, and giving us essential pieces of advice.

Ron Moor is Guillaume, Jérémy, Paul, Antoine, Jeff, Jesse, Laurent, Luc. And today, it is also you ... We are aware, buying an album without listening to a single piece, it is not obvious.

However, here are some links to the first album to give you an idea of Ron Moor artistic universe:

As you can see, we have already begun the composition of this second album. Recording and mixing are currently underway!

The anticipated collection of 2500 € will allow us to finalize the budget of the album.