Support the release of ''We Two'', the very first duo project by saxophonist Dmitry Baevsky and pianist Jeb Patton

A story of friendship is behind this album.

A story of friendship resulting from a spirit of community inspired by music.

Dmitry Baevsky and Jeb Patton have known each other for quite a while. They met years ago in New York, driven by the same desire to learn the language of jazz and to make it their idiom of predilection.    Sharing the same admiration for their predecessors and wanting to cross paths with them in order to learn from the source, striving to integrate all the subtlety of modern jazz in their means of expression, they rubbed shoulders at the same places, took part in the same  jam sessions, worked in the same clubs at the very heart of the New York club scene.

Over the years, their paths kept crossing and as their careers progressed, the two musicians developed an understanding and a sense of comaraderie that translated naturally into their music, driven by a shared respect for jazz  and a ceaseless striving for excellency. After two small-group recordings,  « Down With It » in 2010 (with  bassist David Wong, drummer  Jason Brown and invited guest trumpet player Jeremy Pelt) and « The Day After » in 2017 (in a quartet setting with David Wong and Joe Strasser on drums), Dmitry Baevsky suggested to Jeb Patton that they make a recording in the simplest possible setting :  a duo.

What better way for these two musicians to reveal their entente than in a tête-à-tête?  What better context than a one-on-one, in which they elaborate the music together, privileging careful listening to one another other, a dialogue, a complementarity?  The complicity is evident between Jeb Patton's  elegant and articulated piano playing and Dmitry Baevsky's vivid, precise and lyrical alto saxophone, each supporting the other with a constant presence, both profiting from unfailing support to deploy the full range of their expression. Rarely have two musicians given the impression of making their artistic proximity so manifest.

Without gimmicks and in a relaxed state of mind, the two musicians do what they do best : improvise on standards.  Carefully avoiding tunes that have been heard a little too often, Dmity Baevsky has chosen a collection of rare standards and tunes composed by jazz giants, which adds an additional charm to the quality of their inspiration : the one of discovery.   From Duke Ellington to Jimmy Heath, from Horace Silver to Charlie Parker or McCoy Tyner (and a nod by Baevsky to Sonny Rollins), the compositions fall within the timeless language of modern jazz, without forgetting the spirit of the blues, as highlighted by a  song that comes from Ray Charles repertoire.

In order to capture in the best possible way the perfect complicity between these two protagonists, the album was recorded in a historic jazz recording studio in France, the "Studio Gil Evans" built in the Maison de la Culture of Amiens.  Other than the quality of the recording studio's Steinway piano, the acoustics of the room allowed the two musicians to record side by side, as if playing on a stage, without screens or headphones, thanks to the science of the recording engineer Philippe Teissier du Cros.  The result is an album recorded as closely as possible to the music, which captures the depth of the piano and the texture of the saxophone, the respiration of the music and all the sparks of their inspiration.

Dmitry Baevsky (born in 1976) : a native of  Saint Petersburg,  son of a writer and a translator, he left Russia to hone his craft and to embark on the adventure of the New York jazz scene at the age of 19.  His virtuosity, his assimilation of bebop, his mastery of all tempos, rapidly made him one of the most brilliant saxophonists of his generation.  In 2005, he recorded his first album, accompanied by two giants, the pianist Cedar Walton and the drummer Jimmy Cobb.  Since then he has made a series of heralded albums with musicians such as the guitarist Peter Bernstein, the trumpet player Jeremy Pelt, the guitarist Joe Cohn and the pianist David Hazeltine.  He is achieving a career on an international scale, regularly performing in Europe as well as in New York jazz clubs.

'' Listen to a few notes on any Dmitry Baevsky recording and you immediately will hear his distinct musical voice. '' (Hot House)

'' Baevsky has chops that make other alto players consider finding another town. '' (JazzTimes)

Jeb Patton (born in 1974) : a graduate of Duke University, where he studied with Paul Jeffrey (Thelonious Monk's last saxophonist), he was a diligent student at Queens College of a heralded master of the piano, Sir Roland Hanna (1932-2002), from whom he assimilated the entire tradition of jazz, and of saxophonist Jimmy Heath, who, after having been his professor,  hired him for his different groups such as the Heath Brothers with his brothers Percy (acoustic bassist) and Tootie (drummer), the Jimmy Heath’s Generations Quintet, as well as the Jimmy Heath Big Band, with which Patton performed often in the United States and throughout the world.  Creator of two albums under his own name, Jeb collaborates with artists such as the  saxophonist Charles McPherson, the singer Roberta Gambarini, brothers Peter and Will Anderson, drummer Rodney Green, and plays regularly in the Vanguard Jazz Orchestra,  the house big-band of the Village Vanguard.

"A highly personal lyricism and a sense of swing that invigorates each of his interpretations."  (Jazz Magazine)

"Patton is a player of great expression, bringing to the surface every little vignette that gives a song its depth and character." (All About Jazz)

"Jeb Patton is one of the most promising jazz musicians of his generation." (All Music Guide)

2. Something for Sonny (Dmitry Baevsky)

5. All Through the Night (Cole Porter)

The album has been recorded, mixed and mastered. Only one step remains in order for it to see the light of day. For that, we need your support.

Launched by the journalist and curator Vincent Bessières, jazz&people is a breeding-ground label that welcomes projects from creative musicians and helps them come to fruition through crowdfunding. It mobilizes music lovers through a responsible approach that gives precedence to the direct relationship between the artists and those who listen to them.  This is the reason we are asking you for your generous financial support.

- the SDRM (mechanical rights of authors, composers and editors) : 800€

- those who contributed to the fabrication of the album (graphic designer, translator, photographer, illustrateur) :  700€

The collected funds will be given 100% to the ''We Two'' project (other than the commissions taken by the distribution platform).

If the campaign is a success, the album will be released at the end of September 2018.

The participants will receive their rewards in the days preceding the release, discovering the album avant-première!

AND IF… following the fundraising, we have more than the necessary amount? Then we will have more resources to promote this music and to make it visible. And if we don’t reach our goal? Then the project collapses! (and you won't be debited)

And with the development of the music offered on streaming sites (from which musicians make almost no money), not many people feel like paying for music anymore. By giving your support now you are making a militant act, because you allow this album to come to light without making the artists take risks, as they have already invested a lot of time and money.  If this crowdfunding project reaches its goal, you will get other benefits in addition to receiving the album before its release date.

The artists need you. But we need artists even more.

Thanks in advance for your generosity and your support. 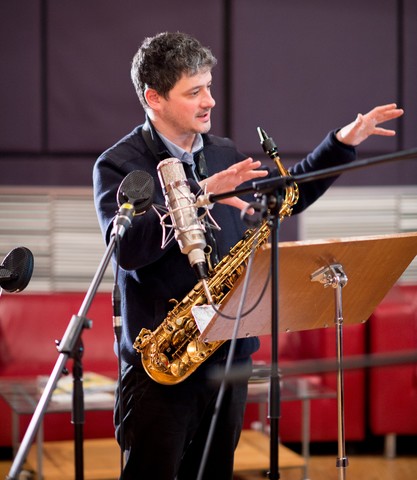