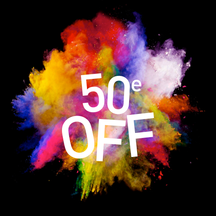 Nowadays, it is difficult to get known and visible to the public.

To remedy to that, we are going to the off festival of Avignon in 2015.

This means more than 20 representations!

We would be delighted to share and exchange this moment with you!

It is an adaptation for the theatre from the novel

For this project, we wrote the adaptation, built up the staging and we play in it to. This ambitious choice has able us to explore the landmarks of an unexplored theatre.Through our reconstitution, we invite our public, in a subtle way, to discover Edgar’s life. They question themselves, with us, during the representation.

Our way of working is concerned by artistic and human questions which are fundamental for each of us.

In the 70’s, Edgar Wibeau, a 17 years old teen, wanders in the east of Berlin, dressed with his old washed-out jeans. He left his natal town, Mittenberg, hoping to be a painter. He will then fall in love with Charlie, a 20 years old woman, already engaged to Dieter, a soldier.

Edgar’s speech is slowed down because of the investigation of a father he has never known. His father discovers tapes that Edgar used to send to Willi, a childhood friend. On those tapes are recorded extracts of “Souffrances du jeune Werther” from Goethe, last tacks left from Edgar…

Au bout là bas is a warm and welcoming theatre with 47 seats, managed by Lucien et Francoise ALLOUCH. We will be representing our play in this place, situated in the middle of Avignon, in a calm dead-ended street, neighbour with the theatres Les Halles and Le Verbe Incarné.

What is our budget?

The compagny’s budget is about 20 000€, including the team’s remuneration, the rent of the theatre, our communication, the copyright and the inscription to the chart of the off.

Thanks to Ullule and the spirit of the crowd funding: We would like the financing to be used for:

- A part of the rent of the theatre

- Rent of a lorry to bring our set