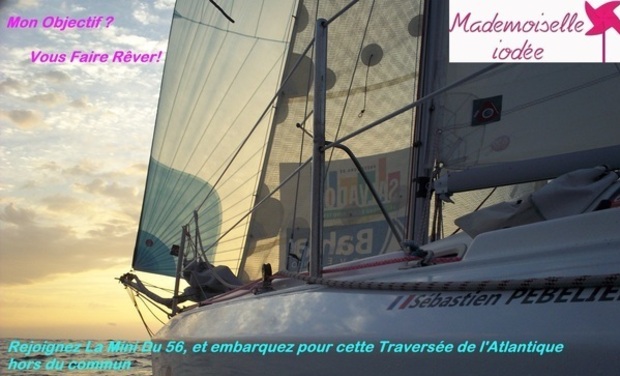 It is a challenge out of the ordinary: 2 years of physical, psychological and technical preparation. But first of all, it is a human adventure with one main goal: Make you dream! Join us to cross the Atlantic, and let’s write this story all together!

I am 23 years old, and I am now studying a master degree in Business and Administration in Sweden. I’ve been sailing since I was 4 years old, and the sea is my playing field. 2 years ago I started this project in order to defend the offshore sailing values, and to provide you with new dreams. Self-support, communication, sharing, respect, and self-transcendence make this story a real life lesson.

The Mini Transat is an offshore race, performed alone on a 21ft boat. From Douarnenez to Point-a-Pitre in Guadeloupe, 3 600 miles, 20/25 days alone on this nutshell. The requirement of this race is that we don’t have any contact with the rest of the world; we only use a very simple system of navigation.

It is an amazing experience pushing our limits. 24/7 of sailing: it is a human challenge.

This project has already begun

I’ve been sailing on my boat for 2 years by now! With more than 6000 miles of experience, I’ve already won two qualification races.

To make you dream, Mademoiselle Iodée is the "star of the project"!

She is looking forward to sail again!

22th June - Mini Fastnet - 600 miles alone – From France to Ireland, and back to France

The goal of this project is to gather the necessary funds to start the 2014 season, pending the arrival of my sponsors!

By helping me, you participate to:

You can join us now to help me write this amazing story!  It is a unique experience, a human project created to provide you with new dreams!

The message is: Self-transcendence, Discipline, Caring, Teamwork, Achievement, Solidarity, Adventure, Nature, and Respect for the environment.

So no time to lose, right click, and join this new experience!

Your name in the Credits of the race movies!

A symbolic photography for this adventure, the boat crossing the finish line in Guadeloupe! Send by post! + The precedent rewards

The official Tee-Shirt of the project with the precedent rewards.

Your Name on the side of the boat, for crossing the ocean!

Your Name on the side of the boat, for crossing the ocean + A photography of your choice inside (around 15x15cm)

A sailing day on board, starting from Lorient, France

Your supporting message outside the boat

A sailing day with a guest of your choice + 1 tee-shirt + Your supporting message outside of the boat!

You become an official partner of the project ; You have your own place on the boom + a place in every communication reports, and on our website at least!