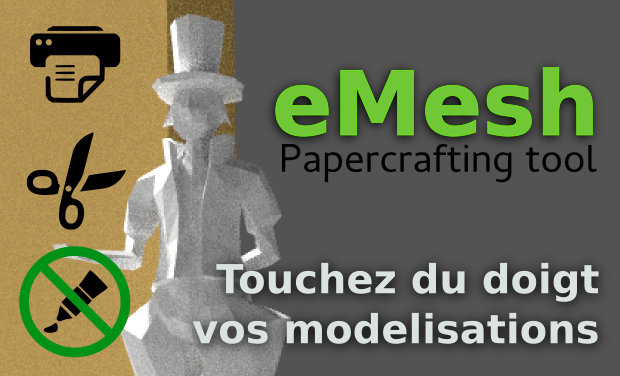 I hope my english is understoodable, improvement comments are welcome !

The application come with two separate workspace. The first one, on the left, allow you to view the mesh an choose the way to subdivise it. The second workspace is used to manage subdivised surfaces in order to print them.

Printing is done using the SVG format. Note that usefull markers are automaticaly added to simplify the mesh assembly

eMesh can obviously be involved in artistic projects context. But also in the creation of functional objects, such as the realization of modelisme body vehicles ( one is on studying ), bot skin and more.... constituting a complementary approach to 3D printing.

The interface is operational, the first prototypes have already been made. The remaining chunks are implementing an optimized definition of tongues algorithm ( already established but not yet imlpemented ). As well as porting the application to the Microsoft platforms and more generally its avabylity process.

The first beta (linux) will be available in February, conjontement with the launch of the project website.

eMesh is written in C + +, it is based on OpenGL and SDL 1.2 libraries. The development is made ​​from a Fedora 20 / Gnome 3 system, using the Anjuta IDE.

I seek the help of KissBankers to cover my expenses mouth. Coding is a full time activity. I am committed to this title to provide a sustained effort for the duration of the project and to "open" the code at the project completion. This project is part of a self-study for careers in computer science (see profile).