Help me gather and pass on american pilots memories and testimonies about their duty in Europe during the cold war, facing the East for NATO 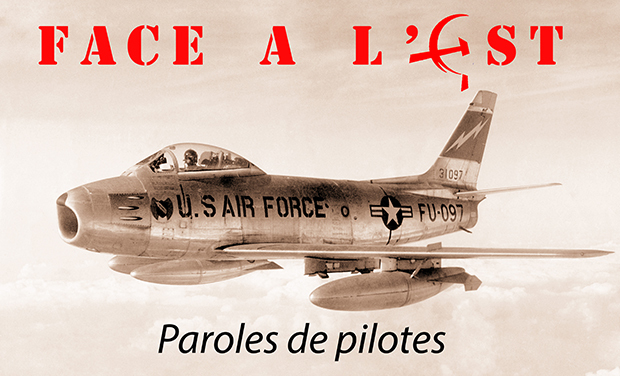 MY GOAL :  TO MAKE A HISTORICAL DOCUMENTARY FILM

Lieutenant Quentin MORRIS while based in Chambley, France, in the mid-50's

In the early 1950's, hundreds of young american fighter pilots were sent to France and Germany to defend Western Europe in front of the soviet threat.

Their mission : intercept potential raids of soviet bombers and launch nuclear strikes beyond the iron curtain in case of world war III.

Although this conflict never blew up in Europe - we know it now - NATO pilots stood their daily alert in front line, not knowing what would happen on the following day…

They left behind them their comfortable America to spend 3 or 4 years of hard living conditions, on muddy air bases built in a hurry, and often unfinished.

The "trailer park" was a constant on NATO air bases in Europe in the early cold war.

At that time, Europe experienced a great housing crisis : living conditions for the GI's and their families was close to what they would have been in a real war. Moreover, they were unfamiliar with the french-german border weather, really different of sunny Arizona or California… Rain and fog was usual; and if you add flying in a crowded sky, close to a border (the iron curtain) not to be crossed, never... you will not be surprised to learn that many pilots lost their life during the cold war too, to defend Europe.

Headstone honoring memory of Lieutenant Aurel who died in 1958, near Rosières en Haye where his F-86 crashed

PURPOSE OF THE FILM :

Fifty years later, I wish to collect the testimony of these former pilots, while it is still time...

Former astronaut Russell Schweickart (Apollo 9) was based in Phalsbourg Air Base, France.

Five decades later, it will be interesting to discover what feelings these warriors experienced while facing a nuclear threat, puting their own lives in danger in order to defend Europe, once more. Many of them were also in charge of a nuclear strike mission... A one way ticket in case of war... How did they handle that?

Cold war history was also written along the french-german border, even people do not know it because of more exposed (and effective) conflicts (Korea, Hungary, Egypt, Viet Nam...). So it is urgent to highlight this unknown episode, while actors of this adventure are still able to share their memories with us...

Fund gathered will mainly be used to travel across the USA and Canada to meet former pilots and gather their memories during filmed interviews.

As a result an important share of the budget will be used in equipment (4K video camera , mikes & audio devices...)

Then, housing will represent an important share of the budget too.

First, I will focus on the most urgent part of the work to be done : collect as many testimonies of former pilots as possible, but also some archival stuff from their own collections (scanning pictures, super 8 films...).

I request your help through crowdfunding because time is running out.

IF CROWDFUNDING PROMISES DO NOT REACH THE TOTAL AMOUNT OF THE BUGET PRESENTED ABOVE, YOU DO NOT PAY ANYTHING! THE MONEY YOU DECIDED TO INVEST FOR THE PROJECT WILL BE REFUNDED! AS A RESULT, FOR YOU, THERE IS NO RISK AT ALL IN SUPPORTING MY PROJECT!

A basic editing will allow to get a first draft of the film, only based on interviews and pilot's personal archives to propose to every backer.

Once these interviews filmed and these precious testimonies saved thanks to you, the second step of my project will consist in presenting my demo to more usual film industry partners (producers, TV channels) to complete my documentary work with official archival footages (+ copyright licence), but also with a professional editing, and maybe an original soundtrack.

IN ANY CASE, IF THIS SECOND STEP DOES NOT HAPPEN, EVERY INTERVIEWS FILMED THANKS TO THE CROWDFUNDING PROCESS WILL BE EDITED AND UPLOADED TO MY WEBSITE (WWW.FRANCE-AIR-NATO.NET). MOREOVER, BACKERS WOULD HAVE ACCESS TO PRIVATE BONUS.