It's time to fight back! 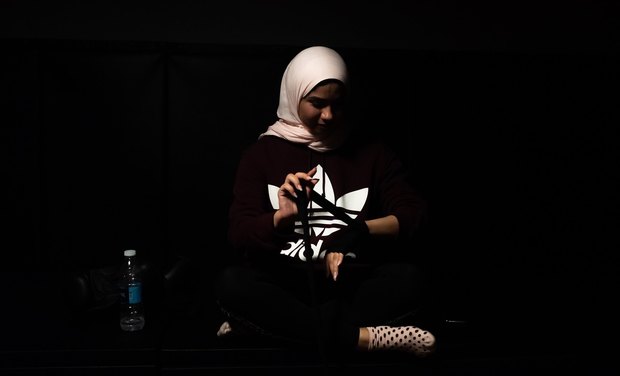 The women who will be followed in this documentary are between 15 and 35 years old and refuse to suffer the fate the Egyptian patriarchal society condemns them to.

Heirs of the 2011 revolution, they belong to the next generation of Egyptian women who refuse to see themselves as powerless victims.

Determined to fight street harassment and break the silence around it, they do not hesitate to engage in combat sports A way to fight evil with evil.

In 2013, Egypt is considered as « one of the worst countries for women», according to a study on women’s rights in the arab world ( 22 countries), by the Thomson foundation Reuters.

While 90% of women in Egypt have been the victims of harassment, more and more young women have decided to learn self defence.

Shereen, 22 years old, founder of  ‘Fight Like a Girl“,a community that offers self defence classes, is one of those women. « After the 2011 revolution, we acquired rights - the right to speak our mind and to walk in the street. The millennials are aware of the need for change and know that Egypt is not a safe place and women need to be strong. »

Introduced in the 1970s in Canada and catering specifically for women, Wen-Do is a self defence technique that combines a few martial arts, including boxing.

During the classes, members learn how to defend themselves, how to move safely in the street and also take part in real life scenarios: « How to react to a group attack, get away from an assailant... »

These classes are also a way for them to confide and share their often-painful stories: « Some members have been sexually assaulted. We tell them it isn’t their fault, that they are not responsible for what has happened to them but are the victims of it.»

The space where they train is confined and reassuring: « During the Wen-Do sessions, with the other's consent, the members are able to touch each other, there is no judgement, it’s only a matter of being open and listening. We create a secure environment for women that we call the safe zone. »

« In Egypt, every woman alive is a strong woman. »

While today Shereen’s community includes around 60 women, the number of members throughout Egypt keeps increasing and there are now 34 communities of Wen-Do across the whole country.

Wen-Do is not the only fighting technique attracting Egypt's new generation of women. More and more young women are turning to combat sports such as boxing or even MMA.

This is the case for Amira, a young woman from Kuwait who has lived in Cairo for the past 9 months:

« I came specially from Kuwait to learn kickboxing. Self-defence sports are very good for women. Two weeks ago I was in the streets of Cairo, a man pushed me and I was able to defend myself. »

Whether they practice combat sports in a community or individually, the new generation of Egyptian women is determined to take back the streets and their bodies, as these have been for far too long considered the territory and possessions of men.

« The men in Egypt are terrified that women are emancipating themselves. Street harassment is a way to scare women and prevent them from leaving the house.In Egypt, every woman alive is a strong woman »

By learning how to defend themselves, Egyptian women show men that their fight for emancipation is just getting started.

Aim of the report:

The aim of the report is to show this new generation of Egyptian women who refuse to be seen as powerless victims. Heirs of the 2011 revolution, they refuse to follow in the footsteps of their mothers and are determined not to be walked over.

Still a long walk to emancipation of women in egypt and the rest of the middle east.

While issues related to consent, the right to protect one ́s body, and gender equality, are increasingly present in our daily Western life, they hide a universal reality: « empowerment ».And with it the concept of power, more specifically strengthening or gaining it.

The aim of this report isn’t to show how to help defend women, but how they manage to defend themselves.

To illustrate there will be a voice over of a journalist along with interviews .

Empowerment remains a real need for women around the world.

Still today 62 million women are stripped of their right to education. Half a billion cannot read and 155 countries maintain discriminatory laws towards women.

Gender stereotypes in the workplace and the gender pay gap continue. Women’s self confidence is still low and the glass ceiling still exists. Nevertheless, everywhere in the world, women have shown that despite the obstacles and difficulties, they will always face up to it.

For the women of the Arab world, the quest for equality hides an even wider fight: to gain access to democracy and enjoy real citizenship, to be fully equal under the law, and to resolve human rights issues based on gender, such as violence against women.

Changing the Western view of the submissive Arab women

Another  purpose of this report is to break down the preconceived ideas surrounding Arab women, often seen as weak and oppressed,having no choice in their future..

This documentary wants to show the strength of the contemporary women of Egypt and also provide a panorama of the fight of the feminists of the Arab world that emerged at the end of the 19th century. There is also a  tradition, a continuity in the struggles from the Harems, the boudoir, to the boxing rings.

Journalist since 2007 and freelance since 2015, I carry out investigations and report on social issues in all areas. The common drive is the human: I take it to heart to recount the stories entrusted to me by those I meet during my reports. In addition to my journalism studies, I did sound documentary training in 2018 with Phonurgia.

Independent filmmaker for more than 3 years, I  have always been interested in filming and storytelling. Due to the many countries I have lived in and the languages I speak, plus my insatiable curiosity, I have decided to share the stories of the people and places I have encountered during my travels.

The 1500 euros will be used to launch the shooting of the  documentary.

We will go there in  November to deepen the research and meet the Egyptian women who practice wendo. The interviews and images made during this trip will be used to make a teaser, before the release of the documentary in February-March 2020.

Below, the detailed budget:

Accommodation (rental of an apartment in Cairo and hotel rooms in Tanta): 500 €