Support a sustainable building construction and help us to build the first Ecodome in Madagascar Island. 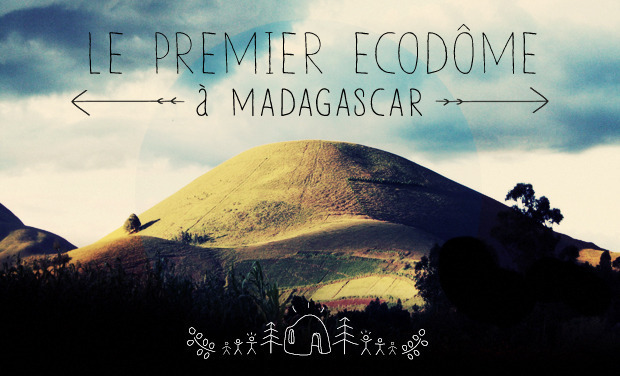 " Earth turns to gold in the hands of the wise " Rûmî

With a team of builders, carpenters, craftsman and a group of volunteers, we will build the first SuperAdobe ecodome in Malagasy territory.

This construction will be the beginning of a human and a creative adventure in the rest of the Red Island. The first prototype will be built in the village of Ampefy during April 2014.

Ampefy in Itasy, landed on the lake and surrounded by volcanic domes.

Genius Ecodomus name comes from the SuperAdobe technical ingeniousness. But we are also speaking about social ingeniousness, this great human ingeniousness which enables us to create and achieve beautiful things.

In front of the environmental challenges and our wounded planet, let’s be creative and adventurous, let’s be genius, let’s be GENIUS ECODOMUS !

Following in the footsteps of Nader Khalili , humanist and architect.

The ecodome is a pretty awesome architectural structure invented by Iranian architect Nader Khalili. It is based on the earthbag technical called Superadobe. The characteristic of this type of construction is based on the use of mud. In the continuity of Khalili philosophy, Genius Ecodomus project has begun where the ancestral land is sacred.

"For 7000 baked brick, half a hectare of forest is burned, thus rejecting 100 tones of CO2 into the atmosphere" (source document : Unicef . Futura Business Park Andranomena . Mai 2011)

Like many others across the planet this land is battered :

- in the city , to respond to the increasing need of housing

- in the rural areas , to have an additional income through the homemade baked bricks.

A mix between traditions and modern techniques.

Before the introduction of baked brick in Madagascar in 1831, the population used to build with mud : the adobe (Tovam-peta, Ritso peta and Biriki tanimanga techniques). Today these natural buildings tend to disappear because of baked brick.

" Adobe is the most common material. Third of humanity lives and works in an Adobe building "

Adobe is a very good thermal insulator. It has facilitated the transition from vegetable home to concrete home, despite some structural weaknesses: poor compressive strength, low sealing, erosion ...

The genius of ecodome is based on:

- The use of local materials and mud

- Low use of Non-renewable energy resources include fossil fuels

We participated in a SuperAdobe workshop in England in order to have experience.

Then, we designed the first prototype, we have made models, we manipulated clay, we analyzed the feasibility in the Malagasy context, we met professionals and we explored many worldwide projects.

Each participant can create a new team to build a new ecodome.

And then the chances to build with low cost and low environmental impact become exponential !!