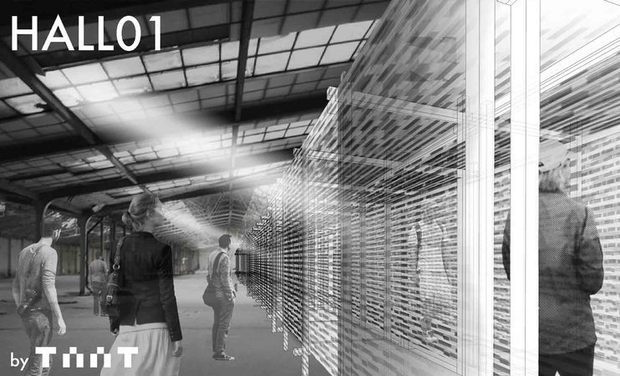 During their successful cooperation for KHOR I (a theatre installation for the Worldexpo Floriade 2012) Dutch theatre maker Gert-Jan Stam and Belgian architect Breg Horemans discovered how their respective disciplines could challenge and enrich each other. They founded TAAT, a collective operating on the cutting edge of theater, architecture, visual art and design. Taking the complex relationship between theater and architecture as a starting point TAAT focusses on developing an ‘architectural dramaturgy’ that generates an intense and direct experience of the physical self and other in a space.

KHOR I: DIY theater installation based on Buddhist prayer wheels.

HALL01 is the first of a series of 32 subprojects that are part of  TAAT's long term project HALL33.

HALL33 is a building that is a theater play and a theater play that is a building. It takes the idea of architecture as theater to its extreme by presenting a sequence of spaces, in which subtle and abrupt shifts of size, feel, sound and light draw two participants along a journey of anticipation, frustration, compression, claustrophobic crisis, discovery and dramatic unfolding. Lost in this ‘spatial dramaturgy’, one’s direct relationship to the other participant is up for continual re-negotiation.

HALL01 will take place in Maastricht (NL) in March 2014 as part of the 'During TEFAF' festival.

As a first step towards the building that is a theater play, HALL01 introduces a modular structure in order to investigate architectural and dramaturgical themes such as mimesis, experience of time, visual relationships and ‘scratch-design’. Each module consists of two parallel spaces that can vary in size, position and cladding, working literally as a framework for the spatial and dramaturgical research.

The 1:20 scale model below shows the initial set up for HALL01. The sequence of parallel spaces shifts from the wide and high first module to the low and narrow middle module and on to the last high and wide module. The model shows a multitude of spatial possibilities concerning size, proportion, light and visual relations. The transparency between the parallel spaces as well as the transparency to the outside (both on the sides, the ceiling and the floor) are different in each module, contributing to the specific experience of each ‘scene’.

SELF/OTHER HALL33 focusses on the non-verbal, physical, visceral and psychological interaction between two individuals in a specific space. How do I feel in this particular space and how does that affect my perception of the other person? How does it feel to be in a tiny space in which I can hardly see the other or how does it feel to be in a huge space in which the other can clearly see me? These kind of interactions are shaped in the parallel spaces using all architectural means possible. In HALL01 the main focus is on the visual relationships between the two participants and between the participants and the outside world.

The dramaturgical structure of HALL33 is based on the 17 stages of the ‘monomyth’ as defined by American mythologist Joseph Campbell. In his celebrated book ‘The hero with a thousand faces’ Campbell describes the ‘monomyth’ as a narrative blueprint that can be traced in any myth, story, or movie script. This ‘monomyth’ describes the journey of a hero (or heroin) of which numerous examples can be found in literature, religion and cinema.

'Monomyth': the 17 stages of the hero's journey.

TAAT devised a ‘timeline’ through which these 17 stages are translated to a specific dramatic conflict between a Self and an Other and consequently to a specific space or scene that enables the experience of that specific non-verbal conflict.

Timeline example: three stages of the 'monomyth' with associative images.

Each HALL is organised and presented in a partnership with a local theater and an architecture institution. HALL01 will be presented in cooperation with Theater aan het Vrijthof and Bureau Europa at the 'During TEFAF' festival in March 2014 in Maastricht (NL).

Through the partners TAAT aims to build a strong relationship with the city or region in which HALL is presented by involving experts and audience in the design process as much as possible. To this end a specific walking route through the existing theater building is designed. This part of the process is called ATAT: A Theater As Theater. For the second part of the process, the Theater as Architecture Training Academy (TATA) workshops are organised to challenge and inspire local theater makers and architects. The final construction incorporates the specific architectural features as well as reference to the history and mythology of the building in which it is presented.

HALL33 is a European project that connects people and organisations on a local and an international level by inspiring dialogue. Each HALL aims to build a strong connection with the local surrounding, history and community. Industrial characteristics, architectural history and 'urban' mythology are examples of the specific elements that contribute to the 'DNA' of the location at which HALL will be presented.

To build a solid relationship with that location and the local community we involve people and organisations as much as possible in the design process of 'their' HALL. Presentations, exhibitions, workshops and the collection of local 'hero's journeys' all contribute to the idea that HALL is produced by the community instead of for the community.

HALL01 will take place in Maastricht (NL) in March 2014 as part of the 'During TEFAF' festival.

HALL01 is a coproduction with SoAP, Bureau Europa and Theater aan het Vrijthof.

HALL33 is currently in the research phase. There are a lot of things to be discovered, examined and tried. We not only actively invite experts or fellow artists to share their view, but we generally invite anybody to comment on or contribute to the HALL33 project. Any kind of (constructive) feedback is much appreciated. So please send us an email any time.

HALL33 is a long term endeavor that cannot succeed without the active participation and support of different people and organisations on different levels and in many different ways.

Your contribution will allow us to build HALL01 and to make it as impressive and unique as we envision it to be.

A part of that will be covered by funding.

A part of that will be covered by sponsorship.

A part of that will be covered by people who have offered to work for less or for free.

This is where you can help us out.

Your contribution will be spend on wood for the the modules, carpenters, transport and additional materials.

We came up with some rather nice 'rewards' to show our appreciation. Have a look at the rewards section to find out!

In the fortunate event of us collecting more than €6000 through Kisskissbankbank, the additional money will be spend first on paying people that were willing to work for us for free, second on a little marketing boost to secure funding for the continuation of the project and if possible we will reserve part of it for HALL02.

We are looking forward to seeing you at the Pre-Premiere-Party of HALL01 in Maastricht!

If you have any questions about HALL01 or about the HALL33 project in general, please send an email to info@soap-it.eu