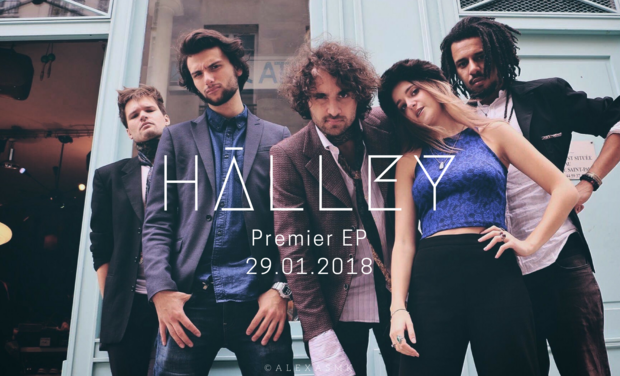 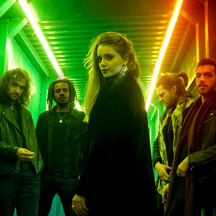 After spending a year or so performing in Parisian venues, we, Hālley, Alternative Rock band from Paris, France, have finally decided to record our first EP in order to share our unique sound to the biggest crowd available, the Internet, while arranging its original songs to never-before-heard studio versions.

For those who do not know us yet, we are Hālley, a young Alternative Rock band from Paris, France  formed two years ago. We all met during our first year of study at the ATLA School of Music, a music school located in Paris in 2015. At first, our goal was simply to play covers from songs we loved for our school's jam session, since we quickly knew that we shared common influences.

Then, Clara, lead singer of the band, asked us to listen to her originals that she had written on piano and vocals, and the rest of the band instantly loved  it. We arranged two songs that we presented for the ATLA School Concert at the New Morning in 2015, for our first concert.

Aware of our potential and our musical chemistry, we went back to work in September 2015 and we added to the band our keyboard player Gaël, who gave a new dimension to our sound.

Our band on stage at the Bus Palladium, in November 2016.

Our lead singer Clara then won ATLA School of Music's  songwriting contest  in partnership with The Institute, a London-based music school. We were fortunate enough to then have our first music video produced by the school, for our song Where Is Ziggy, available below :

Our first bass player Theo, after more than a year of partnership and support, decided to leave Hālley's ship  after our concert last March at the Reservoir to return to college. We then contacted a friend of ours and ATLA alumni, Loïc, who in a week learned almost all of our material and who convinced us instantly after a single rehearsal together. Since then, he has brought a grandiose scenic energy and an even more sought after sound in the continuity of our musical genre.

Since then, we've kept on gigging with this new formation, and after 2 years of existence, 12 songs composed and arranged and more than 20 shows under the belt, we came to the logical conclusion that it was imperative to go through a studio phase in order to put the majority of our tracks on CD ! Therefore, we naturally came with the idea of ​​our first EP.

The project is quite ambitious: it is a double EP, including a total of 8 original songs (2 EPs of 4 songs each). The EP will be divided in two different parts In Moon We Trust and Run For My Sun. We made this choice because we already have a dozen originals in our catalogue, and we believed it was time for us to record the majority of them and to let you hear the musical evolution of the band that has been going on for more than one year as well.

Being totally independent and self-produced, we need YOUR HELP to finance this wonderful adventure so that this EP will be as well made as possible.

If you wanna hear us performing first, here is a link of a live recording of our song In Moon We Trust, performed at the sound engineering and filming school 3is in Paris :

If you're not into reading, there's a quick video (in French but with ENG subtitles) on top of the page to introduce you to the project :)

The funding will be used to finance the various stages of the project's release, including :

- The sound engineer for his hours spent in the recording studio : 400 €

- The digital distribution of the EP via TuneCore : 40 €

If the funding exceeds our first goal, we will invest more money into digital marketing through social media and will also print vinyls who'll be available at the end of our shows !

One exclusive Hālley badge from one of the two EP covers, + 2 digital format tracks 2 weeks before the release.

4 songs on Digital format 2 weeks before the release (plus previous counterparts).

Our EP in physical format signed by every band member (plus previous counterparts).

The Physical EP (+ all previous counterparts).

Exclusive Hālley Tote Bag, Physical EP signed by every band member, + an acoustic version of one of our songs that YOU will pick on digital format (Tote Bag Limited to 50 copies)

Spending a day with the band : assisting to rehearsal in Paris + meet and greet with the band members afterwards (+ previous counterparts).

A private acoustic concert at your place (traveling and housing fees at personal expense), unreleased acoustic versions of our songs just for you ! (+ previous counterparts).

A custom made electric guitar painted and designed by all band members. Custom paint, autographs at the back of the body, and etc.. (+ previous counterparts)