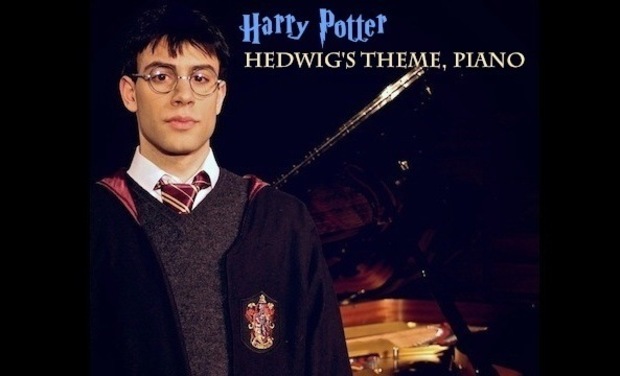 You are likely to recognise “Hedwigʼs Theme”, as the main title from the Harry Potter films ; here is the piano version !

In 2008, David Pasqualini had the ambitious idea to transcribe the main theme from Harry Potter films to the piano, from the symphonic score, and without technical limit for a pianist.

After having succeeded, he published on YouTube a video of himself playing that score on his piano, with very little preparation (about 4 hours, which is not much !).

Despite the bad sound and image quality, the video attracted the attention of the online community.

From that enthusiam, over time, the idea grew to make a beautiful HD video of that song, on a grand piano, with staging and… a pianist disguised in Harry Potter !

This was to be an ambitious video to match the ambitious pianistic performance.

This project has been self-produced.

Resources were very limited, but we managed to carry out the filming. The total costing of this project should have been more than 10,000€ !

However, we gathered a voluntary team, got the loan of all the necessary filming equipment, a concert hall and a concert grand piano.

We have been lucky to have been well-surrounded and to have found people who followed our project who were so willing to help!

But, there is still a huge amount of post-production work to complete.

We are now in the predicament that we have shot the film but we cannot continue with making it complete, which has been disappointing to the team who have worked so hard and to the fans who have patiently waited, as we had been promising the film would be released for over a year !

That is why we appeal to you for your support.

We are asking for your help to donate and sponsor to this project in order for us to complete the post-production work.

The financial donations we receive will enable us to