The menstrual cycle, is only non-violent blood that flows from our body Every man is born from a bloody belly Period: let's break the taboo 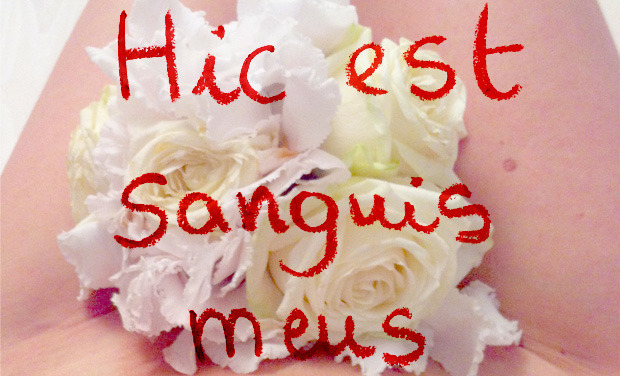 First premise: this is definitely not a feminist manifesto,

but a journey into the world and the female body, without taboos.

With a completely unimpeded view limit.

Body literacy, not dogma, is the goal.

"Women sex is not visible like the man's. Its blending means that he lives, it secretes, it palpitates, he desires , causing discomfort in women as in men. "  Olivier Grignon,  psychoanalyst author of Corps des larmes.

Menstrual blood is an irrefutable marker of women's fertility. It appoints its biological clock, between its first and last period. Every man is born from a bloody belly reminds Maryse Vaillant.

Menstruation thus return him to his origin, to a very archaic anxiety, before any language.

Seriously considering that the average woman spends about an eight of her life menstruating, it is amazing how both entrenched and universal the menstrual taboo remains.

Many of us grew up with the view that menstruation is a "curse".

In the modern world, the menstrual taboo mostly takes form of a certain silence around the subject.

Women, as Chris Bobel says, are expected to keep their periods hidden and silenced.

The purpose of this trip documented with multiple media: photo-documentary, video, bodies installation and performance, will introduce girls and women to their periods as a resource rather than a curse and reveal it to men as the most natural thing that happens to women every month.

Since the beginning of time, the ability of women to generate remains the most powerful mystery to man: "It is not surprising that blood, which reminds them of the fundamental difference between the sexes, intrigues and fascinates men", analyses psychotherapist Maryse Vaillant, " however, it has long been despised by them. Because it flows each month from the women's bodies that can not hold it, unlike the glorious blood of men in battle. And we knows, they still value the assets over liabilities, voluntary or involuntary".

Knowledge of the body without dogma, without filters that's my goal.

The menstrual cycle, is only non-violent blood that flows from our body.

We learn from girls that menstruation "is a sanitary crisis" (Chris Bobel)  but is this not quite an important opportunity to talk about our body and all its wonders?   I want to demonstrate this. Blood is a resource, not a shame as feminine hygiene products industry would like us to believe.

Any presence of blood can activate a fear of death in men, whereas in women, it is instead a vitality index linked to fertility.

The body of the woman freed from taboos becomes poetic.

Menstruation by their relationship with the lunar cycle (28 days) were probably the oldest source of geometric and mathematical sciences.  The four phases of the moon are symmetrical at the menstrual cycle.  The circle starts the "day 1" dates from the beginning bleeding.

My research started long ago, but my crowd funding  to achieve this artistic  anthropological and pedagogical goal, starts today (the first day of my period) and ends in 28 days, exactly at the end of cycle.

That makes 24 years that I bleed every month, and since my first menstruation, which arrived at the wedding of my aunt when I was bridesmaid, dressed all in white, I think that becoming a woman is sometimes painful but know and be part of this world is wonderful.

You can see on my website the first study performance

If you think are emancipated, you might consider the idea of tasting your own menstrual blood, if it makes you sick, you've got a long way to go, baby.

With all my love

The obsession with blood is mine, but the project is very ambitious so we are a very large and heterogeneous group with the nose in the flesh in order to achieve all this!

Rent a space for rehearsals , the realization of video and photos , the exhibition / installation, performance  € 1500

Fake blood 50 € ( home made with food ingredients , it is much cheaper and much healthier , to the extent possible we will do our best to use my real menstrual blood)

Fleurcup 20 € ( this is a menstrual cup , made in France , is a reusable sanitary protection , alternative pad and sanitary napkin. Versatile and flexible , it is placed in the vagina to collect menstruations)