Last year a best-selling author suspected of being the leader of a cult disappeared in the Interpol headquarters. The case is far from cold. 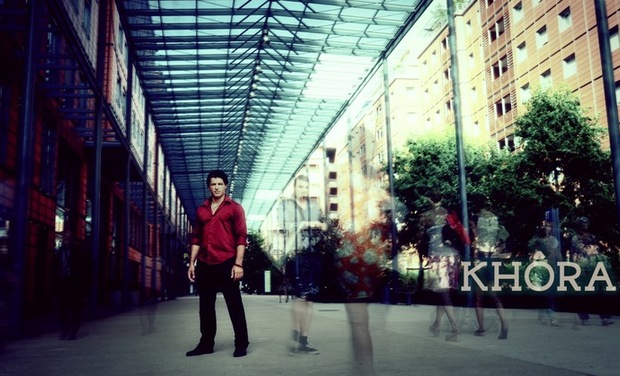 Last year. A controversial best-selling author, suspected of being the leader of a cult and wanted by Interpol, invites a few journalists to a press conference. A few steps away from the Interpol headquarters. He soon puts an end to it by entering the international agency. He hasn't been seen since then.

Yesterday. A young american director is finishing Khôra, her documentary about that unexplained disappearance which had unprecedented consequences : dozen of trials for corruption on a worldwide scale, thanks to the investigation. What really happened on that day ? Who was this author ?

Was he really on his own ?

Khôra is a micro-budget short film that will last around 19 minutes. Its purpose is to present the film to moviegoers, in festivals, as well as to producers, in order to launch the preparation of its feature film version that's being written at the moment.

Khôra has been shot in Lyon, France, hometown of the Interpol headquarters. Its post-production is very promising so far, so we chose to launch a crowdfunding campaign to take the film to the next level.

A FEW FACTS ABOUT KHÔRA :

45 people to will have worked on the film by the time its post-production ends.

6 months of pre-production. 5 languages. 1 feature film based on Khôra being written at the moment.

We'll use the money we raise to finish the video and audio post-production in the best conditions possible, and to promote the film and send it to festivals all across the globe.

Khôra requires a lot of hard and precise work on its colour-grading, because it has many different scenes, shots, sets, and like in every film all those need to be at the same time looking as a part of a whole and compelling aesthetics-wise. One of our major influences is the tv show Hannibal created by Bryan Fuller.

Same goes for the sound design : the subtlety of the soundtrack, balancing between world, electronic and symphonic music and on which we're working at the moment, plus the fact that there are lots of characters and dialogues in the film, require to put in lots of hours, and top-quality equipment. We need our sound design to express the mystery, the depth, the tension of our story. Our main influence in that area is No Country For Old Men from the Cohen Brothers.

About the promotion and distribution : the 5 languages spoken in the film give us more opportunities to show it in festivals around the globe. Since it is most of the time required to send physical mail, the cost of promoting Khôra increases.

Since Khôra as a short film has for purpose to be shown to the widest audience possible and to producers in order to make the feature film happen, the more successful this crowdfunding campaign is the more likely that goal is gonna be reached.

3500 is a minimum to get to the goal that's ours, so, if you believe in us enough to make us ending up with more funds to work with, we'll use that to take the film to the next level in terms of color-grading, sound design, effects, and promotion (we'll be able to make a top-quality website, credits, and poster).

MORE TEASER TRAILERS, PICTURES FROM THE SHOOT, QUOTES FROM THE CHARACTERS, VIDEOS, AND NEWS, ON FACEBOOK : https://www.facebook.com/pages/Khôra/230970750383494

HOW TO HELP OTHER THAN BY FUNDING ?

- TALK ABOUT KHÔRA to your friends, relatives, co-workers ! If you're interested in our project, feel free to share !