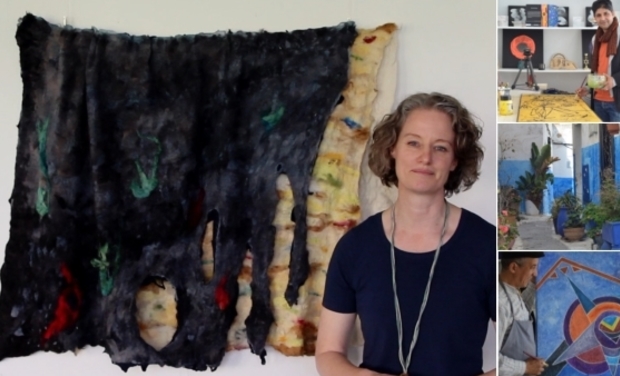 Traveling exhibitions are planned for 2019, which will be shown simultaneously in Germany and Morocco. They strike a bow of intercultural dialogue. The exhibition, which travels through Germany, should be on display in at least four well-frequented locations, e.g. foyers of city halls. To this end, financial support is requested in order to finance transport and travel costs as well as publicity measures.

About 8 intercultural works by Hamid Boukheraz and Thyra Holst

Approx. 12 portrait photos of the artists as communicators of their cultures

Common exhibition catalogue for both countries, will be distributed free of charge

Browse from left to right for exhibition in Germany

Browse from right to left for exhibition in Morocco

- Vernissage with speakers, music and press

optional: calligraphy workshop with one of the exhibiting artists

Results will be the fourth exhibition segment

under the direction of the exhibition site

Thyra Holst is enthusiastic about the open-mindedness with which artists from Morocco and Algeria approach her respectfully on the social networks. These are contacts that lead to impressive personal encounters. These experiences contradict the unfortunately frequent stereotyped thinking of many Germans that "all" people of North African origin are Islamists who despise women and are criminals. Through this personal experience, her own gaze became more and more differentiated and it became her inner need to invite others to also open her point of view. In order to avoid distorted reporting and theory and to gather emotional experiences for her artistic work, Thyra Holst began a kind of self-experiment in which she personally explored Islamic culture using Morocco as an example. After a meticulous preparation phase regarding history as well as Dos and Don´ts followed the first 10-day round trip through Morocco, north and south of the Atlas Mountains. The preparation was especially marked by a kind of sponsorship by a close friend and contact person from Khemisset. Both still face intercultural exchange and sometimes trusting and honest discussions. Their declared goals are joint learning and mutual understanding. In March 2018 they created their first joint work, to which he contributed the content and she the artistic implementation. The plan to incorporate the impressions of cultural experience into her first solo exhibition developed into the plan for a group exhibition due to the strong sense of community that Moroccan hospitality generates.

In April and May 2018 Thyra Holst explores the big cities of the country on a second study trip and meets the painters of the exhibition personally.

Another reason for the project is the result of the last Bundestag election in Germany, which reflects the fact that in those federal states where there are few people with a migration background, the fear of foreigners is the greatest. Fear of Islam, fear of cuts in financial support, fear of........ yes what is it?

It is time to bring the cultures into contact.

"It would not be Thyra Holst if it were about pure scenarios; she is about magic to be unleashed when realism and symbolism meet."

Vernissage of the exhibition "Art Messages”

"Dance and its moving forms can be found again and again in the work of Thyra Holst."

What does the felt have to do with the dance?

"Directly on arrival on the first floor, the visitor meets spectacular

"The striking felt installation "Wraps" by Thyra Holst brings the contents of the Exhibition (at the Frauenmuseum Bonn) in brief: "The Single Mum carries her child. And who wears the single Mom?"

The artist, who describes himself as a multifaceted person, was born in Kénitra near Rabat, Morocco, where he now lives and works again after his studies in Cologne. His southern roots are still reflected in his works today in sunny colours and emotional themes. He found abstract painting about eight years ago. He has shown his works in various exhibitions in Morocco, Germany and Spain. In addition to his artistic activities, he also works as a freelance graphic designer and graphic instructor.

From childhood he paints and draws. At first with pencil and textile paints on silk and textile, then later with acrylic on canvas, with mixed technique (sand, paper...).

His photographic research on the theme: "Art and Interculturality" has manifested his motto about living together:

• 1991 - 1992: Studienkolleg at the Cologne University of Applied Sciences

• 2017: Exhibition on Art Day - the international Art Day in Rabat

• 2017: Participation at the Kalkkunst in Cologne, Germany

Ministry of Culture of Kénitra - Morocco

• 2016: Exhibition at the Institut Français Gallery in Kénitra

Ministry of Culture of Kénitra Morocco

• 2001: Exhibition in the gallery of the Ministry of Culture of Kénitra - Morocco

• 1999: Leader of the workshops & courses in the studios " IDEE & CREATIVMARKT" and in the Bürgerhaus Stollwerk in Cologne Germany

• 1998: cultural consultant at Asta, project manager of the art exhibition at the university

• 1997: Exhibition at the Gallery of the University of Cologne, Germany

• 1996: Exhibition in the Art Gallery of the North Rhine-Westphalia Foundation Cologne,

• 1990: Exhibition in the gallery of the University of Ibn Tofail Kénitra - Morocco

• 1989: Exhibition in the Egyptian cultural centre in Rabat - Morocco

• 1988: Exhibition (Kénitra Culture Festival) Gallery of the Ministry of Culture of

• 1987: Exhibition in the cultural week of the Moroccan city, Kénitra - Morocco

• 1984: Autodidact with workshops with the artist Michel Deblea in Kénitra Morocco

• Reimbursement of material costs for artists:

•With more donations we can pay more air tickets for artists and thus facilitate intercultural artistic cooperation. This is an essential wish of all those involved.