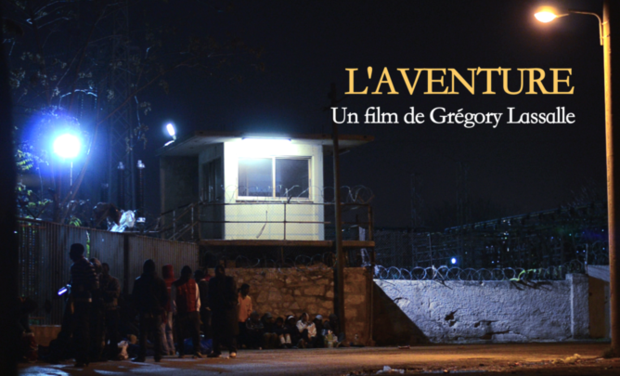 In 2011, as tens of thousands of migrants, Loss, and Madess Moussa arrived in Europe via Turkey. Required by EU law to remain in Greece, they only want one thing : to leave. Therefore earn the money needed to start is an obsession and all means are good. The film "The Adventure" follows the lives of these three Ivorians to Athens - their sense of enclosure, strategies to find money, failover illegally, attempts to start - and explores what is at stake, individually and collectively during migration: relations to other migrant communities, friendship, betrayal, solidarity, mafias and violence.

After several months of trails and approaches, the director met Madess, Loss and Moussa : they have gradually trusted and allowed him to film their lives.

Losseni, the commander, 29 years. This veteran of Ouattara’s militias fled from Ivory Coast, because now the war is over, the settling of scores multiply. To survive and to "make trip" Loss works in the "Al Capone" mafia in the streets of asylum seekers. He wants to migrate to "Ferlande" or to Paris.

Grand Moussa, the technician is 28 years old. This former street child has learned the welding trade in Guinea. Illiterate, he is very good at the technical tasks. Pusher carriage, olive harvester, Grand Moussa refused to get involved into the "Al Capone” mafia. It is an adventure to get papers that will allow him to trade between Africa and Europe.

Madess, the singer, 27. His songs speak about the migrants and their lives : «Visa Turquie», «Pousser chariot», «Veniseloso souvenir»  (Athene’s airport) «Al Capone problème» Tired of living in his country Madess migrate because "he wants to make a place in the sun." His dream is to go to Saint-Denis, near Paris.

"Al Capone." The street of asylum seekers in Athens is the tragic symbol of asylum seeker’s death status in Europe. Application system, voluntarily arbitrary and fails, has facilitated the development of small mafias.

The house. Loss, Madess and Moussa live with 16 other Ivorians in an apartment living room, located in a basement. The place where they spend all their time, waterlogged and without light, represents the Greek trap snapped shut on them.

"In the village." Many migrants go to work in the village to collect fruits and vegetables. Moussa, him, does olive harvest. He is paid 15 euros per day and lives in a disused factory with his companions, without water or firewood.

Push cart. Most migrants pushed trolley at one time or another. Some of them "hunt" paper in the trash in Athens, other iron, as Moussa. Then they sell their goods in the industrial suburb of the Greek capital.

And other places. The squat where they make false papers, Athens airport, the bus immigrants, Sudanese bar, the train leading to the border camp in Debrecen, Hungary, Camp B. Germany...

Adventure is the name given by sub-Saharan migrants to the travel they undertake to reach a paradise in Europe. If adventure is an historical phenomenon that can be analyzed through the prism of human rights, economic problems of Africa or the policies of the European Union, the intention of this documentary project is to tell this adventure through those who live it. Location scouting "Greece is going to build a wall on its border with Turkey to stop the stream of migrants." It is this information, heard in April 2012, in the newspaper  RFI, which prompted me to go in register on the Hellenic peninsula. In May, I decided for the most “northern part” of Greece, where the wall was to be built. This boundary offered some interesting elements, but I could not find what I was looking for. The "story" had already taken place: the bulk of the migrants had already passed and the wall would come to "close" the border’s piece. I arrived in Athens in August for a second location scouting. It was summer and the city was emptied of most of its Greek people. I sat in the Omonia neighborhood, in the city center, where many immigrants live and was present in amazement at the "hunt" against them by the police. "Xenios Dias" (Zeus hospital) was the name given by the Greek government in this massive operation to arrest and make detention of illegal immigrants. Chased by the police, migrants can’t legally leave from Greece because they are forced to stay in the first country in which they entered into the Schengen area. Without work or rights, hundreds thousands of migrants are "stuck in Greece" dreaming of going further in Europe to seek asylum and / or to provide for themselves and their families a better life. The more complicated solution is to walk from the Balkans. The easiest way is to fly with a false identity papers, hoping that the Greek police will fall into the trap. Both solutions are expensive: to earn money at the start is imperative for migrants and an obsession. If some get money from families at home or "predecessors" (those who are already beyond Europe), most have to cope and sometimes switching in illegal activities.

Greece offers all the ingredients for a "sensationalist" documentary on migration. The bodies found in makeshift boats, racist violence, abusive police arrests are part of the reality of migrants in this country and have been the subject of documentaries courageous denunciation.

If during my various stays, I have witnessed these events, my documentary intention was different. I did not want to be a "recorder" of the violence and "limit" my approach to expect that such acts occur. I wanted to film the daily life of a group of migrants in order to provide a perspective on migration that deals with personal issues, inter-relationship and inter-community. Personal because migration is primarily an individual project. Inter-relational because these individuals interact with other migrants and so build a collective experience. International community finally because there are relations of solidarity or, otherwise, of violence between different communities. To follow this three-pronged approach, I needed time to meet the real that would measure these issues. The film was born from the meeting of a sordid place called Al Capone, where migrants come to seek asylum and the meeting with three people. Loss, Grand Moussa, Madess are Ivorians who got traped in Greece, an ambush, symbolized by this Al Capone’s street, but also the apartment without light, moisture soaked walls, where they live. The sole purpose of the three characters is to leave Greece. The narration of the film will be written to the rhythm of strategies and actions that will be implemented to make it happen. Between these elements that will track the history, there will be moments of life, joy, music, but also moments of expectations, empty moments in which dreams appear to be destroyed and where the human lose conception of who he is and what he wants. In terms of treatment, I wanted this documentary to be produced as a movie so the viewer comes away from the purely Greek reality of history and feel its universal aspect. Thus I decided to shoot with the Nikon D7000 DSLR. Giving me flexibility on colors, it allowed me to give an impression on each shot location: dark yellow color of the apartment and the dark disturbing Al Capone contrast with the pale-blue-morning in the factory where Grand Moussa sells iron and bright blue Mediterranean landscapes. This camera is also effective in low light (with a good goal) and was therefore suitable for many shots at night and indoors. The DSLR is additionally handy and discreet which is crucial in order to turn serenely in a street where there are many conflicts and in an apartment living room, where 18 people live. In these places, my camera froze near the action and recorded the time that allowed me to move narratively and meet the challenges that I pursued. I preferred long shooting, to give a sense of reality that is repeated or can be repeated over time.

The objective of this project is to provide a different perspective on migration, based on the universality of human functioning, so that the viewer wonders what he would have done had if he been in this situation too. To meet this purpose, the project was seen as a movie, both at the bottom and at the level of treatment. But once this system in place and the issues defined, the narrative becomes "documentary" to keep involving with experience and decisions of the characters.