Take part in the conception and realisation of an acoustic prototype of the élamophone. 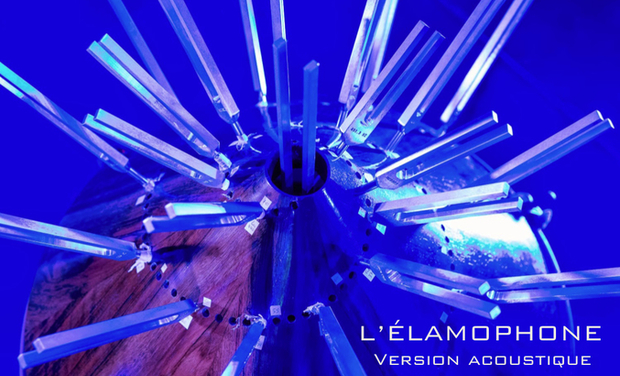 The élamophone is a musical melodic and harmonic percussion instrument that uses tuning forks, designed by Christophe Geiller. An electro-mechanical version already exists, built from 2009 to 2012. The current project consists in the financial study, conception and realisation of a new acoustic prototype.

Here is the story of the élamophone told by Christophe Geiller:

Birth of the project

"It starts in 2009, while I am composing the Oratorio des derniers jours (Oratorio of the lasts days), a piece dedicated to the memory of the deported of the Second World War. I was looking for a sound that would evoke purity, delicacy, power, harmony, the incarnate, the disincarnate, universality, eternity, unity... in one word: the Whole. The only instrument that I knew would be close to what I needed was the singing bowl. however, I needed a instrument that would be easy to use, working on two octaves levels. The idea of using tuning forks came from meeting with a therapist who used them for sound therapy (phonophoresis).

After a first phase of reflexion time to decide which form this instrument could have, and without having found a convincing solution, I had a strange experience: one morning I woke up with the complete picture of the instrument and a precise plan to follow. This could have been a fictional scenario; however this is actually what happened. As this type of experience probably only happens once in a life time, I decided to follow at best the indication to build the instrument with tuning forks, that I named élamophone (from Hebraic elam or eylam means elevation, eternity)"

"The various parts of the élamophone have two functions:

- a functional aspect (the vibration of the hollow body and tuning forks)."

"I gave the realisation of the élamophone to various people: A luthier (Lionel Enard,Pau) for the confection of the hollow body mande out of wood, a manufacturer of bespoke tuning forks (Centre Medson, Québec), a workshop of mechanical precision for the metallic support (A.P.M., Blagnac), a manufacturer of bespoke glass plate (Macocco, Colomiers), a stone retailer (Marc Lico) to drill holes in the crystals that entered the composition of the balls of the mallets.

As the project seemed very ambitious due to its complexity and price, (this part was self-financed) I decided to start with an élamophone without natural amplification of the sound, but with an electro-mechanical sound enhancer instead. This electro-mechanical system used piezoelectric microphones that allowed the amplification of the vibration of the hollow body, thanks to an amplification system. I had a functional instrument without the delicate and costly question of the natural sounds amplification. The élamophone was born in June 2012 and used during a public performance in July 2012 for the Chambre avec Vues festival for the creation of Vie & continuum (Vie & continuum fully available to listen by clicking here). It was used again in October 2013 at the Festival La Novela for the creation of Oratorio des derniers jours.

"I have more or less achieved what I was looking for: sound texture, comfort to play and aesthetic. However, the electro-mechanical system is limited:

Hence the second part of the project that we are now considering:

I am now entering the second phase of the realisation of the élamophone: the study, conception and realisation of an entirely acoustic instrument. I had already envisaged this stage at the end of the fabrication of the electro-mechanical élamophone and discussed this with the luthier who realised the original hollow body. However and due to lack of time on his side, he was not able to proceed with this long and fastidious project. The first stage of this second phase of the program, has been to find a competent artisan who would be able to take this project on board. The luthier Louis Pensec (who is also bassist and gambist) has accepted to work on this task."

Louis Pensec is a luthier (specialised in string instruments) and bow maker. His workshop is in Boucau (in the region of the Atlantic Pyrenees in France).

He creates new instruments following the request of musicians. He specifically manufactures baroque and renaissance instruments such as viola da gamba.

Key pieces of traditional masters luthier are at the roots of his work. Trusting his sensitivity as an artist as well as his knowledge as an artisan he produces unique creations.

In order to build this entirely acoustic élamophone, we need to rethink the vibrant part which is the hollow body. Your gifts will allow us to:

- build a larger hollow body with a different fastening system for the tuning forks.

- study the optimum shape and material for the new resonators.

- conceive and manufacture the new resonators.

All this must be done while preserving the overall shape of the instrument.

The estimated time for this part of the project is about 3 month’s full time work. However, as we don’t know for certain the amount of work required, it is difficult to price each stage precisely.

What if the estimated cost is too large?

One of the key particularity of the élamophone is the ability to keep the sounds for long periods of time (sometimes more than 30 seconds). So, while playing the instrument it is often necessary to muffle a tuning fork. This is currently done by hand and has its limitations. A pedal system would be more adapted and would allow to add variety in the play (short notes or muffle sounds). Should the estimated cost for the acoustic élamophone be less than required, the remaining funds would be used to cover the realisation of the pedal system.