One rickshaw, one camera, two vieo-cameras, 16 countries, a lot of meetings and a lot of fun ! Discovering Eurasia ! 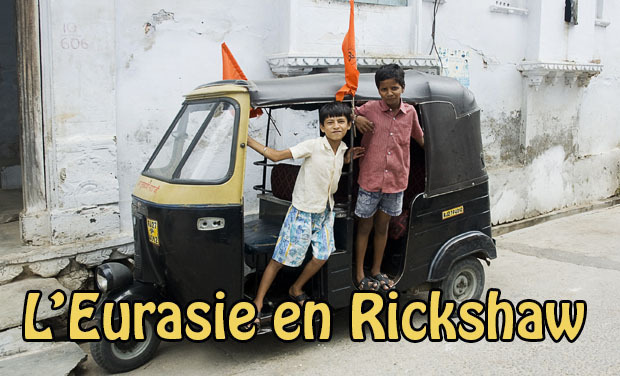 We are two students, Lucas and Mathieu and we are planning a journey never done before and during which we will meet local populations : coming back from India in a rickshaw trough Himalaya, Central Asia, Caucasia, Turkey then Europe toward France.

Environment issues hitting those areas such as:

the drought in the North of India

the melting of Himalaya’s glaciers

the water issue in Kazakhstan and Uzbekistan with the pollution of the Balkach lake and the ecologic disaster of the Aral sea,

the “gate of hell” in Turkmenistan and

the pollution of the Caspian sea will be the basis of a documentary.

The point of view of scientists, experts in those areas will help that documentary in order to get more precise and objective ideas on those topics. Then, interviews of local people affected in everyday life by those modifications of their environment will bring a human side to our documentary.

We will leave from Udaipur, Rajasthan, India. From there, we will go North with the Pakistanis’ border where we will reach Lahore. Afterwards, we will keep going north in order to take the famous Karakorum Highway which will permit us to go in China. Once in China, the trip will take us to the north-west of China to reach Kazakhstan. After our arrival in Almaty, we will drive until Balkach Lake then we will be heading to the Aral Sea. Once there, we will have to go around it to cross Uzbekistan and join Turkmenistan through the Karakoum Desert. At least, we will go to Turkmenbachy in order to take the boat and cross the Caspian Sea. Arrived in Baku, Azerbaijan, we will go till Tbilissi, then Turkey and arrive in Europe. After Istanbul, we will cross Bulgaria, Serbia, Hongria, Austria, Germany and finally France where our trip will stop at Paris.

We choose a bold and original conveyance for this journey: the rickshaw. Kind of motorized “tuc-tuc”, it is the principal conveyance in India. Symbol of a life-style, the rickshaw, through his slowness, is corresponding to the Indian motto “Shanti shanti” (“slowly slowly”). By its conception half craft, it raises for us a philosophy to create working machines. Totally opened on the outside, such a vehicle will easily allow a contact with local populations in India and Pakistan where it corresponds to the local life, but it will help as well in other countries where it will provoke curiosity. This conveyance, which will as well be our place to live, will interest the public. Of course, technical damages and outside obstacles we will encounter will be part of the journey.

What is the aim ?

Our goal is to wake up minds on the ecological dangers which are going to hit several populations in the coming years, in touristic areas like India or Turkey, but in unknown territories like Central Asia as well. We will film the concerned sites, in the order to reveal the magnitude of damages and we will try to get solutions with the help of Scientifics. If we will do all which is possible to do 12,000km in rickshaw, we are especially hoping to create a realization of the environment of the areas we will be crossing.

Lucas came back from his world trip, convinced that the people he will meet will leave its mark on him for life. Mathieu lived one year in England, one in Russia and several months in India and Laos. We both share a common memories of those trips: the Baikal Lake. This huge and biggest amount of fresh water of the world has been threatened by a paper mill which was polluting the extremely pure water and is now working on a closed circuit. The lake is now clean enough to be drinkable again. It is through mixing our points of view and  and think about our past journeys that we decided to make a documentary. We are both concerned by the environment.

First, we want to talk about the environment problems hitting Asia all along our way:

the drought in the North of India where the monsoon is no longer enough important to irrigate lands in Rajasthan and paradoxically the chronicle floods touching those same areas;

the melting of glaciers of Himalaya and the emergence of the moraines; Water management problems in Uzbekistan and Kazakhstan  with, in particular,

the ecological disaster of the Aral sea where, during the USSR period, more or less 70% disappeared;

the Balkhach lake which has lost also a good percentage of its water and is threatened by a massive pollution problem;

Darvaza, the gate of Hell in Turkmenistan, huge gasbag burning without any stop since 1971;

pollution of the Caspian sea creating an important loss of fauna and flora. Beyond the observation and the analysis of those environment issues, where we will do several interviews of Scientifics and local political members, we wish to meet the local population concerned by those problems and do a statement of the everyday life of them. We wish, as well, to perceive how they feel that, and which future they think they will have.