Support the creation of a short film (end year project) which mix japanese and occidentale culture through two brothers! 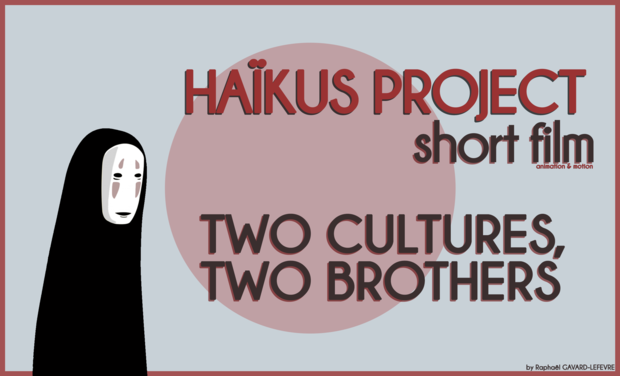 Here is a first look of the main technical staff and also the two main characters/actors.

It tells the story of two really close brothers who have very opposite way of mind : the first one (and older) named Tao is a deep dreamer in love with Japan, from poesia (haikus, which he will see in the nature (for instance : ''On a bare branch, a perched crow, autumn twilight.'' by Bashō where Tao will see a crow on a branch with the text which will appear inlay within the composition)) to japanese animation, things that give him some reflexions by his (little) brother, Allan, who is very down-to-earth and very focused on economy (it's him who protect Tao), like "why are you loosing your time to watch these things whereas preparing your future and finding you a job?", etc...

One day, this same Allan will get into street accident which makes him loosing the use of his legs. This will forced Tao to comes off his bubble and to find out the real world (like a rebirth). This one will firstly have some childish reactions like put some honey on his brother's legs because he "saw it in animes", and little-by-little, he will understand better what his brother is needing and therefore support him the best he can.

Moreover, Allan, with the time (and the fact he is always with his dreaming brother) and without having the choice, will, step by step, open up himself to Japanese culture (mostly arts). With that said, even if Tao is the main character (and the one we will follow most of the time), the one who will progess the most (understood in terms of open-mindedness) is his brother : Allan. The two brother's life will be deeply changed because of this accident.

This short film is so an invitation to discover the Japanese culture already present within our occidentale (mostly French) society (visible but also invisible like with cartoons like Pokémon or Yugi-Oh), but this invitation isn't blind : it will dressed a critical and not only beautiful portrait of the culture of the Rising Sun country.

A bit of technic / symbolism

Filming should begin by the end of January, beginning of February.

Why a crowdfunding for a year-end project?

This short film does not require a bunch of stuff but it cost a bit of money (and by the way, this stuff will be used to professionnalise myselft into the huge world of photography and audiovisual).

The total sum may seem huge (it is) but it is only a hoped-for sum, which would be reached in the best case.

It is require to add the transport to La Rochelle (17, and 2 hours) plus a housing for some nights. Counting (on average) 35€ the night for 3-4 nights, we reach approximately the sum of 140€.

The rest of the crowdfunding, if it is reached, will allow other spending linked to the filming if it is needed or to buy a bit more of stuff (external screen, SD card or external hard drive, etc...)

Who will collect the recipes?

In order to remain transparent, we want you to know the account that will receive the proceeds from the prize pool will be my father's account.