Fund a project that offers an innovative approach to social change in French public schools ! 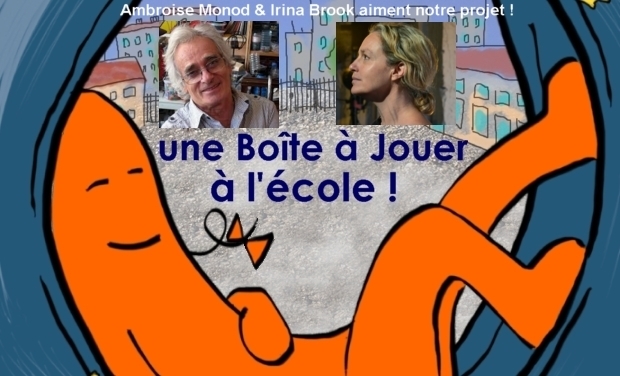 A project that contributes to the harmonious development of children at school, while taking care of the planet.

The heart of the project :

and promote the reuse of objects.

It is about transforming the human and material environment in schoolyards, to promote free and creative play for children and enable the reuse of objects destined to be discarded.

The Play Box in two points:

1. A giant "Play Safe(Box)" placed  in the playground,

and made ​​available to all children at the school.

2. Training for the adults to become play facilitators.

for the children, for the adults, for our society

- Reduces accidents and unwanted behavior in the playground,

- Nourishes the natural creativity and imagination of children,

- Develops autonomy and self-esteem in the child,

- Children are more ready to go back into classrooms and learn,

- Enhances the role of the supervising team,

- Meets an ecological need through the reuse of objects,

- Raises the awareness of the school community and parents on environmental issues.

In conclusion, children and adults are happier at school, the increase in well-being is considered a key element for success at school.

This is an operational process that has been successful in over 200 schools abroad : in England, the USA and Australia. For more information, visit the Scrapstore PlayPod website.

Instructions for the “Boîte à Jouer” :

They are filled and refilled with clean and secure loose parts collected from the circular economy in a participative way, in partnership with insertion networks specializing in collecting objects, and with parents.

The "Boîte à Jouer" is opened daily at play time (before and after school, lunch time, etc…)

All the children from the school could play freely at the same time with the objects from the "Boîte".

Up to 250 children could play at the same time.

Training and mentoring would be provided for the staff to help them become not only supervisors but play facilitators as well.

Emma and Jean-Marc, two parents with children attending primary school. Our aim : increasing well-being for everybody at school.

We each have a significant career in the fields of : working with children, activity leaders, sustainable development and the voluntary sector.

Together, we have created the non-profit organisation :

that runs the project.

During all the first phase of exploration, we multiplied contacts with a wide range of people (teachers, supervisors, political elects, Education Department Office, researchers, environments organisms,…)

Our project raised a lot of interest which confirmed that it would be positive for children's development.

Several of those people offered their support and some became our partners :

Specialized networks for collecting the objects

And a team of voluntary people (a HUGE thank you, without you all, we wouldn't be here !) architect, graphic designers, webmaster, sound engineer, builders, teachers and friends, young, and less young.

Our objectives for the next 5 years :

Transform the human and material environment so that kids can access quality play opportunities with reused objects during playtimes.

Change the perspective on play at school and develop a better understanding of its role and impacts in the lives of children.

120 schools equiped with a "Boîte à Jouer" and 30 000 children benefiting from them.

Reuse 224 tons of waste by collaborating with social inclusion organisations for the collection of materials.

Raise the awareness on environmental issues in the school community through a series of informative programs.

The money collected from our KissKissBankBank campaign will be used to FINANCE OUR PILOT PROJECT in 2 schools in Paris and province in the 2014 - 2015 school year :

= The delivery and installation/removal of the boxes, plus the collection of objects to fill them, training courses for the adults and supervisors involved, supervision of the project with the school as it is rolled out.

= Study of the program and its execution, focusing on the impacts on the development of the children involved : interviews with users, both children and adults, and documentary filming and observations in the playgrounds.

= Making of a film to present the Boîte à Jouer, its history, functioning, and impacts.

If we surpass the objective, we can also :

Pay a manager to develop the project further, to seek further finance, to meet and promote the project, seek partnerships and involve local politicians.

Create and execute the information programme for Recycling and Reusing.

Extend the website www.jouerpourvivre.org to include a ressource for schools, supervisors, and educational institutions.

An hearty and grateful welcome to the inauguration of the first french "Boîte à Jouer", a festive time of sharing, encounters and discovering the project (online for those who won’t be physically present !) + your name as a donator written on our website.

The above contributions + 8 special issues of our newsletter specially focused on the launch of the pilot project, with tricks on re-use and recycling (all in English!).

All of the above contributions + a key-ring of “Brindille” (our mascot) made from recycled tyre.

All the above contributions + a personalized copy of the film made on the pilot project !

All the above contributions + your name written on the very first "Boîte à Jouer" (it will travel at least in 2 schools Paris / province) !

All the above contributions + your name written on 3 of the tyres from the very first "Boîte à Jouer" !

All the above contributions + an original laptop cover, made from recycled inner tubes + your name written in the list of donators in the film made on the pilot project!

All the above contributions + an astonishing iPad cover, made from recycled inner tubes and safety belts + your name and your picture in the film made on the pilot project !

All the above contributions + a picturesque bag made with recycled fire hose and safety belt + a mini interview of you in the film made on the pilot project !

Business contributors : All the above contributions + a personalized presentation of the project by the founders for you and your collaborators (all in English) !