Help in the creation of a Website: a human history who’s who on a single screen, 50 centuries of historical figures and outstanding events 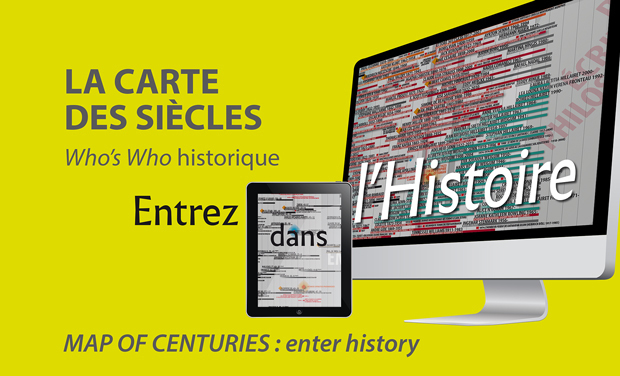 A UNIQUE OVERVIEW OF HUMAN HISTORY

The ThéhisthumTM project started with the somewhat crazy idea of displaying 15,000 significant historical figures and outstanding events of the last 5,000 years on one single surface ! Viewing the entire history of mankind from as far as the invention of writing has enabled historians, philosophers and travelers to recount the stories of great events or ruling dynasties at a single glance, without needing to turn a single page.

By gazing over Ramses II, Plato, Copernicus and Steve Jobs, Julius Caesar, Antonio Vivaldi, Richard the Lionheart, Jean Jaurès and Stanley Kubrick on a single synoptic table, the onlooker is being provided with a new synchronic vision of the broad theatre of History, and those who presided over the sometimes rough walk of civilizations.

HISTORICAL FIGURES ARE DISPLAYED CHRONOLOGICALLY ON A GIANT DIAGRAM SPANNING

From the first pharaohs and Chinese emperors to the present day. Dynasties and series of political figures are grouped together by country or empire, from north to south. Each figure appears as a coloured block (with a key code), which lenght is proportional to the person’s real – or estimated – lifetime, providing a perfectly consistent scale across fifty centuries.

The political, military and intellectual environment of the time in which these historical figures lived, is enlightened by the dating of major events : conflicts, famous battles, natural disasters or deadly pandemics, but also geographical or scientific discoveries. The table also includes the birth of languages, alphabets, calendars, and all the major steps that punctuated the rise of modern cultures and civilizations.

PLAY WITH YOUR MEMORY AND KNOWLEDGE

The table includes almost each and every great historical figure in every field up until the sixteenth century. From that point, it focuses on major artists, authors, scientists and inventors.

This educational tool offers the chance to jog your memory, by playing with your knowledge and restoring names or events from your personal memento or years as a student.

BUILD UP YOURSELF AN ACCURATE MENTAL MAP OF THE GREAT CIVILIZATIONS

By highlighting the temporal proximity of great historical figures, the Théhisthum allows us to rebuild our mental map of history and provides a more accurate vision of civilizations, their origins and dates. We have all heard about Mozart and Tchaïkovski, Leonardo da Vinci and Rembrandt, Christopher Columbus and Marco Polo, Charlemagne and Tamerlane, Nefertiti and Cleopatra, Shakespeare and Goethe, in their own fields, but could we re-situate them where they belong on the scale of centuries ?

LET’S GIVE IT A TRY: would Bach have been able to read Rabelais ? (Yes !). Would the king François the 1st have been able to meet Galileo ? (No !). Could Roosevelt have listened to a Bob Marley song ? (No ! the former died in 1945, the latter was born in the very same year). Who was the king of France when the Inca empire came to an end ? Charles the 9th, 1572.

A UNIQUE EDUCATIONAL TOOL AND A CUSTOMIZABLE GIFT

Various different versions of the original table can also be carried out upon request. If you are interested by a specific field, countries, regions or towns, sportsmen or musicians, scientists, artists, masterworks or discoveries, the ThéhisthumTM can be tailored to meet your needs and taste. Your personal family history, names of your friends as well as of your favourite authors, artists, etc. can also be incorporated to the basic model.

5,000 YEARS OF HUMAN HISTORY IN ONLY A FEW METERS

To be used on walls in public places (train or subway stations, museums, universities, libraries...) or private spaces (companies, hotels, private residences, waiting rooms). Eyesight level of the reference panel is centered on Europe, and more specifically on France. But any focus or angle may be imagined as well as a reference axis : leaders of another country, other continents, main historical figures of a specific field, history of a company, a city... A curious eye in a subway corridor, a waiting room, or on a liner bridge will perceive 15,000 names and some of the most famous events across 5,000 years of our ancestors’s history. Discover, learn or revise your classics during your spare time !

INTRODUCING THE ULTIMATE «MAPOFCENTURIES” WEBSITE : A NEW VISION OF HISTORY ON OPEN ACCESS   Walk through 5000 years of history from your computer, your tablet or your smartphone without having to browse through numerous websites! Type a name and have it displayed instantly in its right place among its contemporaries, with titles, dates of birth and death, high deeds or remarkable achievements!  Wander around thousands of famous names displayed in chronological order on a huge synoptic table and rediscover thousands of historical figures at your fingertips! Wouldn’t this be magic?

It took us two years to achieve this on paper. Now the next step is to break free from ergonomic constraints by using digital technology and offer new stunning features: make many more names (up to 20,000 !) available, have hundreds of the most famous ones taking you straight to their Wikipedia page on a single click, give you the opportunity to carry out researches on specific themes on the table (like kings of the twelfth century,  scientists of the 19s, german writers..). In French and English at first, other languages will follow if the collection exceeds expectations.   More details : www.mapofcenturies.com

Development of the website (Responsive web design : easy reading  and navigation across a wide range of devices from desktop computer

monitors to tablets and smartphones) – 20 000 entries