Fund this documentary, an unparalleled perspective on the unique world of Le Havre’s dockworkers, one of the last union strongholds in France. 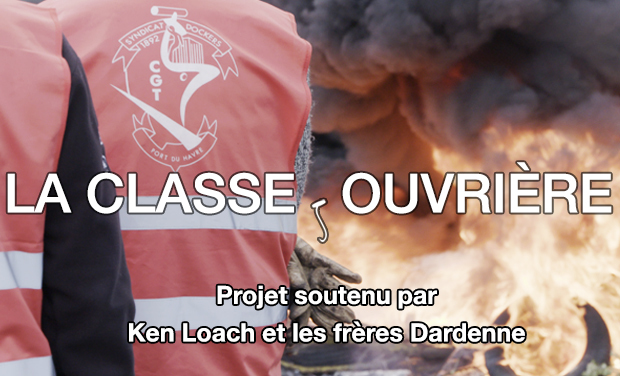 'La classe, ouvrière' is a documentary film project that offers an unparalleled perspective on the unique world of Le Havre’s dockworkers, one of the last remaining strongholds of trade unionism in France. With dockers as our guides, we’ll learn of the reality of their profession, of their bitter struggle against port automation, in France and across the globe, and discover the singular charm of a little known city that will celebrate their 500th anniversary this coming year.

While considering the launch of this crowdfunding page, Auberi reached out to a few of the eminent film directors, whom she had the chance to encounter over the years through her documentary work, for their advice and moral support.

Jean-Pierre and Luc Dardenne and Ken Loach, sensitive to the subject at the heart of 'La classe, ouvrière', responded right away to endorse this project. Beyond the cinematographic works for which they are most known, they have each directed documentary films in witness to the everyday life, the struggle and sometimes the failures of working class communities, in Belgium and in England. The Dardenne brothers and Ken, thank you for your tremendous goodwill.

The idea for the film was germinated in March of 2014.  Over the course of several visits and many exchanges, this idea was developed into a film synopsis, taken on by a Parisian production company and sent to a major French public television channel.  The immediate interest the project first sparked led to a protected waiting game.  While the station has expressed their curiosity from time to time, they have yet to come to a decision on the project.  Meanwhile, Le Havre’s old working class neighborhoods are being slowly demolished and labor relations have deteriorated as the port prepares to celebrate its 500th anniversary.

By the nature of the project itself, a solidarity effort such as crowdfunding has become imperative.  It’s only with your support that 'La classe, ouvrière', anchored in a decisive electoral year in France and the US, will develop from an idea to a film.

Auberi Edler is a documentary filmmaker and journalist.

She has written and directed many films and news features for European television channels.

Senior Correspondent, Editor-in-Chief, New York City Bureau Chief; she has also been a senior reporter covering many conflicts around the globe, from Afghanistan to El Salvador, Bosnia to Iraq.

Her recent filmography includes documentaries on the Dardenne Brothers and their Rosetta (2015/Arte), on Asghar Farhadi in Tehran for a Separation (2013/Arte), Calais, Dead End, news feature on refugees in Calais and their fates once in the United Kingdom, Land of Dust, news feature on labour conditions in the South African grape industry for IRIN (2014), The Equation of Love, web documentary on the work of the Gottman’s (2012/France Televisions) and The Island, documentary on the Scottish island of Foula and the struggle for survival of its 29 inhabitants (2011/France 5).