60 years after the first contact with the indigenous peoples of Xingu, I pursue the footsteps of my father in search of new encounters. 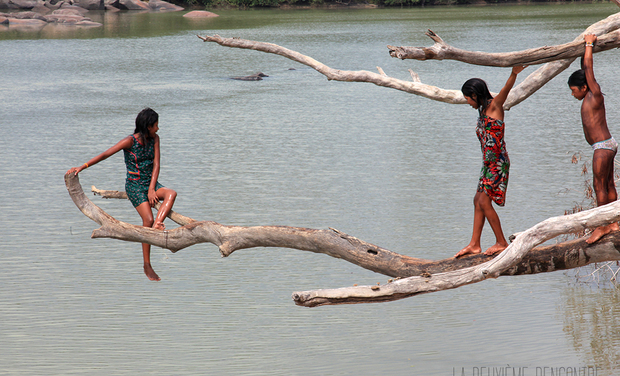 The film follows the traces of the first images of the indigenous peoples of Xingu made by my father, photographer Henri Ballot. Through the crossing of gazes between the past and the present, the familiar, the unknown and the other, a new encounter is possible.

The first encounter between white men and the Mentuktire community of the Kayapo Nation from the Xingu region (in the north of Brazil) took place 64 years ago.

My father, photographer Henri Ballot, participated in the Roncandor-Xingu Expedition, led by brothers Orlando, Cláudio and Leonardo Villas-Bôas, documenting with his camera the first contact with the isolated indigenous groups of this territory. As a photojournalist of the famous magazine "O Cruzeiro", he then published a series of these images. Contrary to the clichés conveyed by the press, his view of the native people he encountered was quite singular.

Encounters from yesterday and from today

From the thread of history and memory, the film makes a portrait of these re(discoveries) for the present and the future. What actually happened after the first meeting?

The photos of Henri Ballot testify to the encounter and the clash between two cultures, but the challenge today consists in understanding how things have evolved for this community.

They certainly met several other white men: ethnologists, landowners, traders, civil servants, and so on. But none had restored to them the images of their predecessors. I’ve met, among others, with the two survivors, the leader Raoni Mentuktire and Bote, who have talked about the images of the past and the present of the community.
Beyond the journey of my father, pionner of such a human adventure, the question of the survival, resistance and dignity of the native nations remains a crucial one.

At the beginning of the 20th century, my Breton grandfather, an engineer, was sent to Rio Grande do Sul. There he met my grandmother, there my father was born in 1921. Shortly after, they returned to France, where my father lived until the Occupation. After volunteering as a pilot for the Free French Air Force in England during the war, he returned to Brazil, where he lived for 47 years.

As for me, born in Brazil, separated from him since the age of five, I’ve lived in Paris for 30 years now. Through this archive I inherited, I get closer to him while finding my Brazilian roots.

During the preparation for the exhibition of his photos, "Regards sur les Indiens d’Amazonie" (presented in particularly at the Musée de l'Homme in Paris), I remembered his critical comments about his journeys. He questioned the isolation of the native peoples, and challenged the idealized official image of the "good savage" or "good Indian".

What happens when we retake the paths of the past?

I have fully - independently, passionately and urgently - funded the pre-production and shooting of the film. To be able to finalize it and distribute it, I invite you to embark on this adventure with me!

The collection will cover the post-production costs as well as the distribution of the film.

All this and beyond ?
Help us spread the work of Henri Ballot and place the struggle of the peoples of the Xingu in the heart of the international debate.

Thank you so much ! Your support is very important. You will be aware of all the news of the project and your name will appear in the credits credits.

A photograph from the film + previous rewards.

Access to the film's viewing link once the festival circuit is over + previous rewards.

A signed DVD of the film + previous rewards.

You will be invited to a screening of the film in Paris + previous rewards.

A print of a photograph by Henri Ballot + previous rewards.

You will be invited to accompany one day of the editing process and will have access to the first versions of the film + previous rewards.

You will be an associate producer! + The previous rewards.