Help the kids of the school La Houille Blanche to create and paint their own mural project with Chara Rimpa, a Japanese arts association 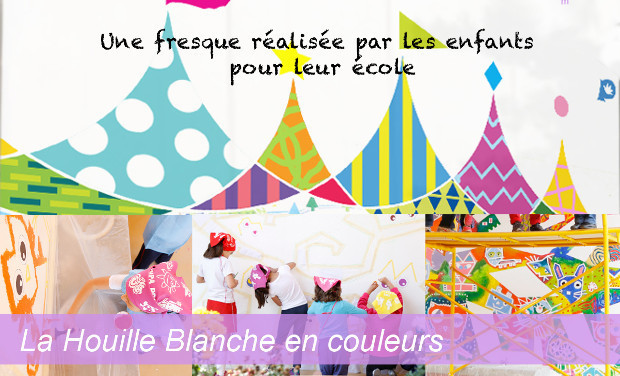 “Yes, you can draw on the walls!” That’s the idea of the mural project, “La Houille Blanche in Couleurs". Not only is the project a cultural exchange with Chara-Rimpa, a Japanese arts association, it is also a unique opportunity for the children of the Houille Blanche Elementary school to create their own designs and characters and be guided in a special and spontaneous technique that will result in a enduring work of public art.

Based in Grenoble, in France, La Houille Blanche Elementary School is a public school with an international program where children from all around the world meet children from the neighborhood, the city and the greater Grenoble metropolis, to form a diverse and multicultural school community. Unfortunately, this colorful school community is not reflected in the exterior of the school building, which is rather… gray.

Once upon a time…

There was a beautiful school with a diverse and colorful community of children who came from many and sundry lands, from all over the neighborhood to all over the world. But all of its richness and beauty – the childrens’ imaginative stories and creativity - was trapped inside the walls of a gray, concrete building from one of the less appealing architectural eras.

Along came a Mom with an idea to release the inner beauty of the school for all the public to partake and enjoy. But her idea came at the worst possible time (or so it was said). There was a city budget crisis, tightened security and tension, and a million priorities competing for limited resources.

Apparently Chara-Rimpa, this incredible Japanese non-profit that’s created a unique method of mural making for children, was looking for a vast wall for its first project in France! They had already worked with kids in Mexico ity and California, where kids not only created magnificent murals, but also learned kabuki face painting and kakejiku scroll making in hands-on workshops developed by Chara Rimpa.

But how could she do it?

Enter a team of 5 optimists and the birth of La Houille Blanche En Couleurs, a mural making project to free the beauty of the Houille Blanche Elementary School, in Grenoble France!  Is this team of parents brave enough to take on the French administration, to navigate the web of bureaucracy, to dare unleash the school’s inner beauty… all at the worst possible time?

Yes we can! But we need your help.  We have been to the City, the Metro and several companies, held serial bake sales and are now crowdfunding to raise the +/-9500 euros in funds or materials we need to cover the cost of the project,  the biggest of which is to clean and whitewash 387m2 of  wall space.

Chara Rimpa’s unique method is based on the Japanese principle of "Chara-Rimpa": "Chara" is an abbreviation of the word "character," and “Rimpa” is the name of a Japanese art school from the 17th century. The innovative method developed by the Chara-Rimpa team allows even the youngest participants (5-6 years) to create original characters to populate the mural; not simply color in a predetermined design.

The Chara-Rimpa team has worked with schools in Japan, the United States and Mexico. Help us welcome them for their first project in France !

A project already in progress !

Chara-Rimpa has already created a preliminary design outline for the Houille Blanche featuring the majestic mountains surrounding Grenoble. These mountains will be decorated with patterns created by the children themselves in a design contest.  Finally, on the big day, the children will follow Chara Rimpa’s method and use tape and paint to create characters and symbols representing the school. It’s impossible to know what will appear.  Aside from the design outline, everything is created spontaneously and on site!

There will be a vote to decide which design outline will be adopted.

A mural… and workshops, too !

More than just an experience on painting on the walls, the project includes some workshops around the Japanese culture and the renewable energy (The name of the school « Houille blanche » refers to « hydroelectricty »).

Children are guided in making a “Kakejiku” illustration of an original character based on three distinct photo images of one person. The images that are originally made for this workshop represent different aspects of the person’s life.

Kabuki drama has a 400-year tradition in Japan.  Participants transform themselves into kabuki characters by applying Kabuki syle make-up.

- You care about art in schools and creative approaches to learning

- You are part of the Houille Blanche community - past or present or extended - and would support any initiative to release its inner beauty!

The beauty of this project is in its values : art in school,  community, collaboration, cultural exchange, sustainable energy …

What motivates us is the amazing opportunity to offer the Children at the Houille Blanche an adventure in creativity and the opportunity to, quite literally, leave their mark on the school.

But this can’t happen without you!

Every euro counts and we thank you for all that you can do to make this project happen!

If you want to see how this project evolves, follow us on our blog or on Facebook !

Come join us at the school’s brocante on Saturday, May 28th  when we will sell a limited edition mug and handmade crafts to fundraise for the project.

Who is behind the scene ?

Nicole was transplanted from Los Angeles to Tokyo and then Grenoble where she is creating her story: there are mountains, two little mischievous boys, good friends and soon a hundred little characters who will give life to a wall at the Houille Blanche…

Keiko is Japanese and has a husband and two girls.  She has lived in England, Germany and Ireland.  She currently lives in Grenoble where she appreciates the company of friends of many different nationalities. She is thrilled with the Chara-Rimpa project which will introduce the wonderful culture of her own country, Japan!

Anne-Francoise has returned to France after four years in Germany with her three children. She fell under the charm of this initiative through which she is experiencing a multicultural adventure with a completely enthusiastic team.  As the project is geared toward children and their world, she couldn’t dream of anything better than to join in!

Jeanine, coming to us straight from Canada, is the mother of two children.  Passionate about Japan and having lived there, it was an obvious choice to get involved in this multicultural project.  What speaks to her in the project is also the fact that it will raise childrens’ awareness about sustainable energy.

Catherine, a writer and mother of two, takes pleasure in helping expatriated children develop an appreciation for the French language.  The values of this project and her own resonate perfectly: intercultural exchange, collaborative effort around art, and a nice challenge for the children.

Marilyne, mother of three children, returning to France after several years abroad, sees in this project a nice manifestation of art and collaboration with children.

The objective is to finance a project that will guide children in creating three murals, featuring their own artwork, at the Houille Blanche Elementary and Houille Blanche Kindergarten.

The team, « La Houille Blanche en Couleurs » made up of parents of Houille Blanche students, has approached both public and private sector partners for the support needed to carry out the project

The total budget for the project is approximately 9600€

Today, our funding partners are :

- The City of Grenoble

Through our bake sales and partnerships, we have already raised over 4000€.

We still need approximately 5000€ which would permit us to

- Clean and whitewash the walls (387m2) in preparation for the painting of the murals.  At over 4000 €, this is the largest single cost in the project.

- Host the Chara-Rimpa team, an association experienced in guiding young children in the creation of murals.  Chara Rimpa team will come directly from Japan to participate in the one-week project (1600€).

Please note that the Chara-Rimpa team is composed entirely of volunteers who will travel to France at their own cost explicitly to participate in the project.

We have set our goal for 1000 € as we continue in our fundraising activities. Secretly, we hope that so many of you will support the project with such enthusiasm that we will raise the 5000€ we need all on kisskissbank! At any rate, whatever the result of this appeal, we sincerely thank you for your participation!!!!

You can participate in the vote for the final design outline of the mural! Thank you for your help !

Participate in the vote for the final design outline of the mural! + Get an original "Houille Blanche en Couleurs" postcard souvenir of the mural! A big thank !

Participate in the vote for the final design outline of the mural +Get a set of 5 original "Houille Blanche en Couleurs" postcards! A bigger thank !

Participate in the vote for the final design outline of the mural - Get a set of 5 original "Houille Blanche en Couleurs" postcards + Reserve a place to participate and paint your own little character in the mural using the Chara-Rimpa technique – first come, first served! + An original Houille Blanche en Couleurs mug featuring the first outline design for the mural And a even bigger thank !

Participate in the vote for the final design outline of the mural -Get a set of 10 original "Houille Blanche en Couleurs" postcards + Reserve a place to participate and paint your own little character in the mural using the Chara-Rimpa technique – first come, first served! +2 original Houille Blanche en Couleurs mugs featuring the first outline design for the mural. And a huge thank !