Participate in the restoration of the pagoda at the end of the lake! 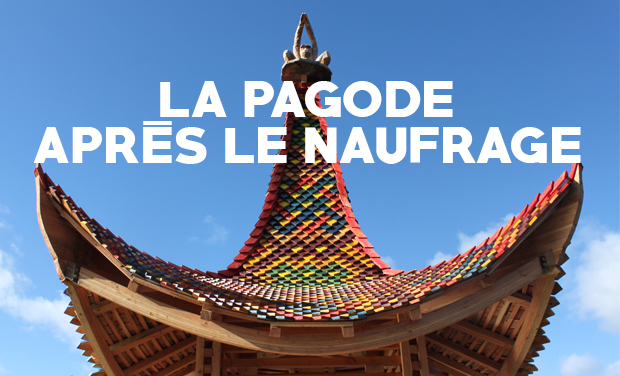 Jean-sébastien Tacher is a French sculptor born in 1980 in Roanne. He formed the collective Baoum * at the Beaux-Arts of Grenoble with which he made various happenings, crossing for example the channel on a rowing boat. He then collaborated with Pied la biche and created the Multiplex performance at the Center Pompidou in 2011. Since 2010, he has devoted himself to chainsaw sculpture. Then, following residencies in China and Villa Arson (Nice), he was introduced to ceramics and bamboo work. Today, he creates large immersive installations combining sculpture, motors, games of light, sound and stopmotion films. Last summer he participated in the Palais des Monteurs exhibition at the Palais de Tokyo (France).

The end of the lake pagoda

La Clayette is a small town in the very heart of Burgundy, which is recognized by its castle located right in the center of town by a lake. This castle was rebuilt at various times and the last architect, a student of Viollet-Le-Duc gave it its fairy-like look, reminding the fairytale castles.

The place was already poetic, but I wanted to add an extra touch. An island or the possibility of an island. An inaccessible and exotic place. Like the fabriques or follies that were built in the 19th century in the parks of the castles. My idea was quickly fixed on a building with asian curves : a pagoda. Then fate confirmed this intuition since the La Clayette crane factory closed. Not for lack of orders, but for the usual pretext of too expensive labor. So to ward off the spell, it seemed doubly pertinent to build a Chinese pagoda in La Clayette. Bring a little piece of asia where prosperity has gone to asia. Later, I added the colored roofs with motifs inspired by the Burgundy roofs to make a metis building.

The idea was launched in 2012 and the funds were released in 2016. After three months of construction, the pagoda is inaugurated on Saturday 19th November 2016.

At the end of November 2016, a storm crosses France and does not spare La Clayette which will suffer for 2 days winds up to 80 km / h. The pagoda holds the shock but drifts away from the shore causing the weights that anchored it to the bottom of the lake. At the beginning of December, we maneuver to bring the pagoda back to its starting point. The objective was also to add 600 kg of weight to prevent it from drifting again. When we lift the weight, it leans dangerously and the water passes overboard. One of the three people slips into the water at 2-3 degrees, dragged to the bottom by the weight of his clothes full of water. I remain with my father to prevent the pagoda from overturning completely. Fred Bouhy manages to hoist himself in the boat, refrigerated. It was imperative that it heats up. He comes to pick us up in the boat and 5 seconds later the pagoda finishes turning. The top of the roof is torn off. The monkey goes up to the surface. The pagoda ends up turning completely. It's a disaster.

Pulling the pagoda close to the edge of the pagoda and resurfacing it damaged much of the roof. One of the four platforms surrounding the pagoda has also been damaged.

However the structure resisted well. The float system is integral. In despair succeeds the will to rebuild. Then the supportive reactions of La Clayette inhabitants, of the local press, put us before the fait accompli: the pagoda had been adopted. It must be restored. We must also remember the 3000 visitors during the construction of the pagoda and the first weeks after the inauguration. If everything goes as planned, we will begin work in early March 2017, for a new inauguration in April 2017. The restoration as well as the construction is supported by the association of contemporary art Esox Lucius.

The restore of the pagoda requires 1 month of work for 2 people full time with additional aids for delicate operations.

It will be necessary to buy materials to repair the damaged wooden parts, to remake tiles, to varnish them, to fix them. Replace the crooked platform.

The new ballasting system consists of 4 weights of 250 kg of concrete immersed in the bottom of the lake and connected to the 4 corners of the pagoda with large barge chain (4 x 5 m). As a second security system, the pagoda will be moored to the shore by 2 cables of about 50 m.

We can not maneuver the weights with a single boat. It will be necessary to build a raft with a hole in the center and a lifting system to lower the weights smoothly. We will no longer manipulate the weights directly on the pagoda because this is what caused the capsize.

And to secure it over the long term and take maximum precautions, we will lower its center of gravity. Either by adding weight to the platform, or by adding steel arms with new floats.

With the commission of Kisskissbankbank, it makes a budget of 5940 €.

Aware that it is a large sum, we set the call for donations at 4320 € to ensure the restoration of the pagoda. It will be able to remain at the dock (but visible to the public at the level of the aire de loisirs) until we find the funds to secure it in a safe way.

Whatever way you help us, we and the pagoda will be eternally grateful to you. Thank you in advance !