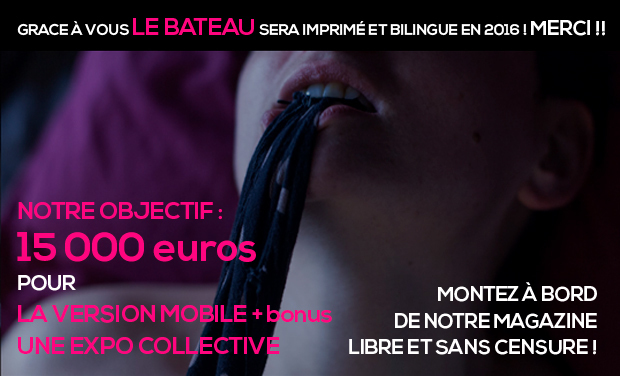 LE BATEAU has a regular crew and invite an outsider every issue. LE BATEAU is sailed by rookie sailors and renowned Pirates, they all share the same bursting creativity, openminded sexualities and a lack of boundaries. They all contribute to the issue according a them given by the Captain, it permits a true coherence, a playful dimension and a chance to exceed their own limits.

After successfully self-publishing 5 issues in 2015, LE BATEAU confirmed it had a public and would like to take a new dimension increasing quality and quantity of the monthly printing in 2016. Our goal is to create 4 issues a year and to setup a subscription plan to make things simpler for everybody. Larger quantities will allow us to make it available in libraries also, and they are looking forward to distributing it.

The crew is composed of 17 naughty sailors  in 2015 and hired new talents in order to tease you even more in 2016 : writers, illustrators, journalists and photographers.

Here is the new team:

LE BATEAU MAGAZINE is a pirate magazine and it likes to share, to thrill and to sail to new conquests!

LE BATEAU is a magazine :

We're launching this crowdfunding in order to raise enough money to print the 2016 four issues so we can create a year subscription.

Each issue will cost 8 euros

- With 8000 euros the magazine will have an english translation for it’s paper edition!

- With 15 000 euros we will create the mobile version, an exibition with the art pieces and awesome goodies!