Join the adventure of the Blutopia Tour today and meet the people who act to rid the ocean of plastics!

If you're coming too late but want to support us, you can still make a donation to our association Blutopia here.

You have no time to read the (long) description that we have written with application and patience but still want to learn more about the project? We have something for you. Promise, it won't take more than 30 seconds!

The Blutopia Tour in figures:

Our final objective? A 7-episode web-series (1 episode per country, you guessed it) to be screened in 50 cities around the world.

And to do so, we need you! Your missions, should you choose to accept them: talking about us around you, making a donation and choosing a nice gift in return.

Gifts will be hand-delivered or sent in Metropolitan France only.

More than 350 million tons of plastics are produced every year. It used to be a revolutionary product but it is now invading the ocean and threatening biodiversity. We have been using it for years for its light weight, its durability and its low cost without ever being warned of the consequences it could have. Today, things have changed. Scientific reports are multiplying and figures are alarming.

This plastic tide is threatening plant and animal life.

The facts are right in front of us and a feeling of helplessness can emerge because of the extent of the problem. And yet, Ted Siegler, American economist, says rightfully: "This is not a problem for which we don't know where the solution is."

Blutopia stands for Blue and Utopia: the utopia of a plastic-free ocean.

Despite alarming figures, we are convinced that this utopia is within reach. Many entrepreneurs are developing solutions at a local level that could make a significant difference at a bigger scale.

Here are 4 major objectives targeted by those solutions.

You're wondering how those solutions look like? This is what we will show you with the Blutopia Tour!

With the Blutopia Tour, we will meet the people who act to rid the ocean of plastics. In 7 months, we will cross 7 countries among the most affected by plastique pollution: Myanmar, Thailand, Cambodia, Vietnam, Philippines, Indonesia and Australia.

The Blutopia Tour is the very first big project of Blutopia, a non-profit organisation (association loi 1901 in France) officially created in March 2018.

Our mission? To give all citizens and organisations the power to act for a cleaner ocean by using existing solutions.

The steps to reach our mission?

The Blutopia Tour is crucial in the construction of the organisation since it will allow us to create content for the media and to acquire knowledge for the consulting agency.

We are Malaury and Julien, a couple of ocean lovers and travellers from France committed to save the ocean from plastic pollution.

Are you ready to join the adventure?

We have decided to stay totally independent and not to ask for financing from big corporations. The Blutopia Tour will thus be financed exclusively by our personal savings and... by all our generous donors!

With 4,000 euros, we will invest in high-quality equipment to produce an awesome web-series:

With 6,000 euros, we will organise 10 workshops in France to help you protect the ocean by reducing your plastic consumption.

With 8,000 euros, we will launch the Blutopia Tour 2.0. From January 2020, we will highlight our country and meet the French people developing solutions for a cleaner ocean.

With 10,000 euros, we won't stop there and go on with the Blutopia Tour 2.1. After having travelled all around France, we will meet our European neighbours to discover what they implement to rid the ocean of plastics.

The products given in return for a donation are from 8 brands that we love, with who we share the values and that support the Blutopia Tour.

Gifts will be hand-delivered or sent in Metropolitan France only.

Discover all the brands below! ↡

If you want to discover the products, go up on the page and take a look at the right in the gifts column. To join the adventure, choose your favourite one and you will take a step towards the utopia of a plastic-free ocean! 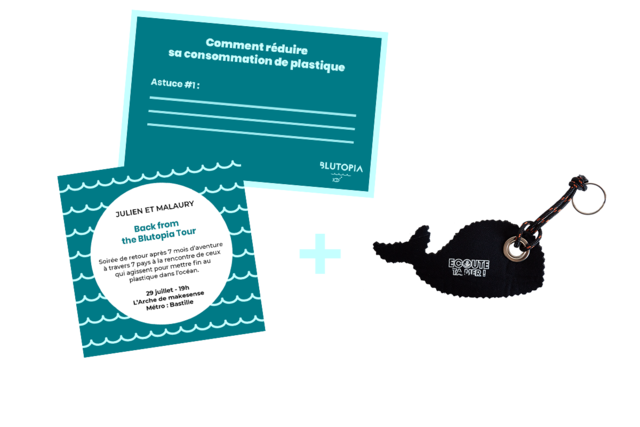 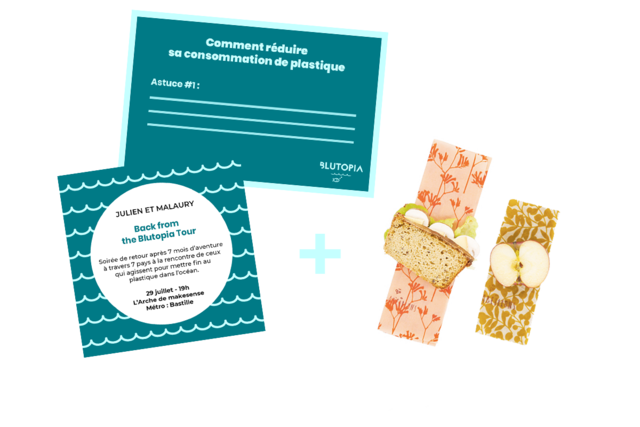 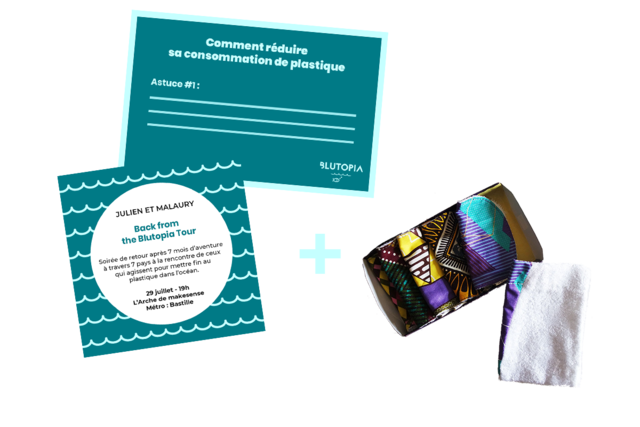 A big thank you + an invitation to our come back party in Paris + a useful tip to reduce your plastic consumption + a beauty kit Ka.Ji.Ji with 5 wipes and 1 face glove 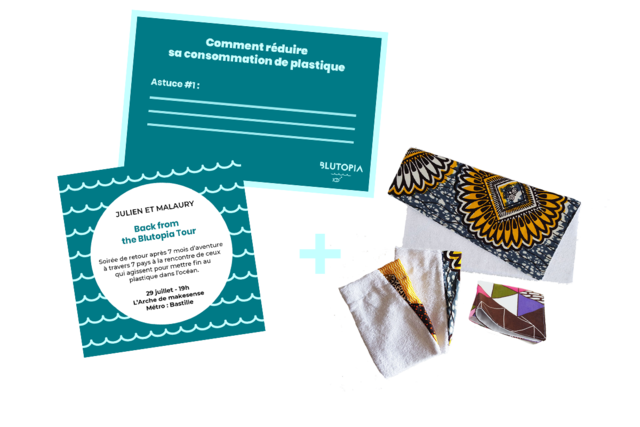 A big thank you + an invitation to our come back party in Paris + a useful tip to reduce your plastic consumption + a zero-waste kit Ka.Ji.Ji with 2 face gloves, 1 sponge towel and 1 washable tissue 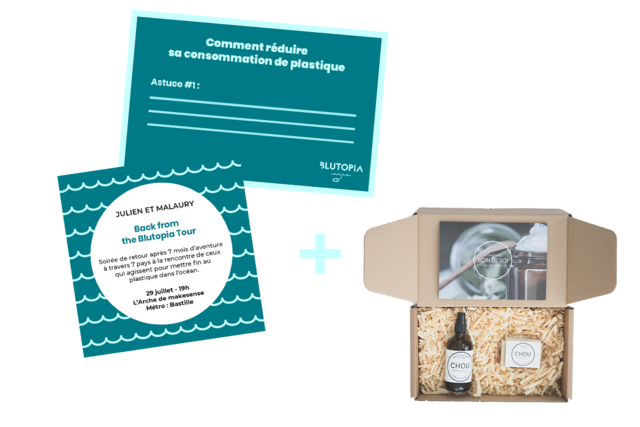 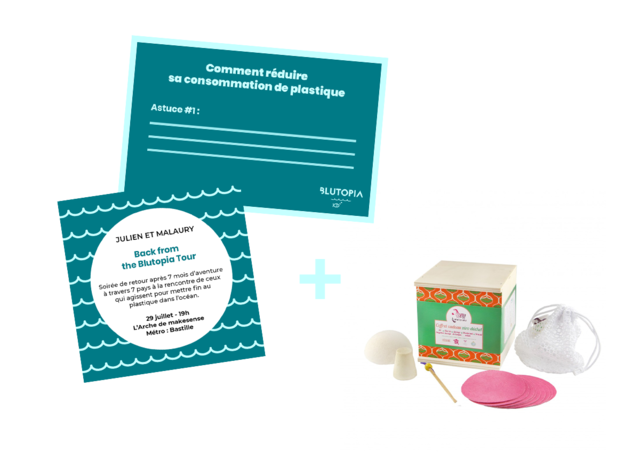 A big thank you + an invitation to our come back party in Paris + a useful tip to reduce your plastic consumption + a box zero-waste Lamazuna with 1 konjac sponge, 1 solid deodorant, 1 oriculi and 10 washable make-up removing wipes 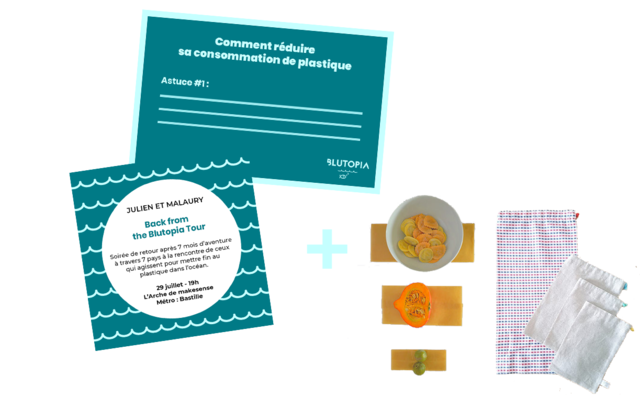 A big thank you + an invitation to our come back party in Paris + a useful tip to reduce your plastic consumption + a box ManaMani with 3 reusable food wraps, 1 bread bag and 3 bulk bags 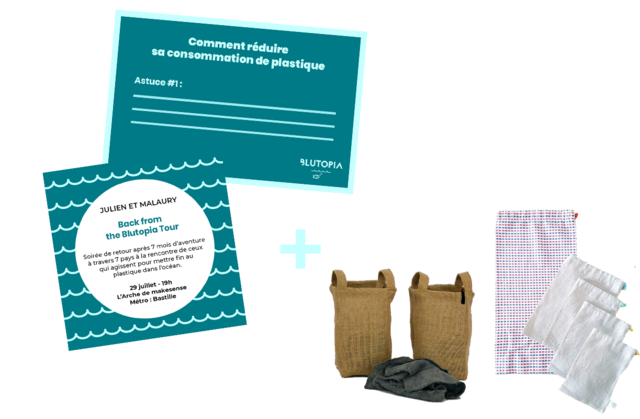 A huge thank you + an invitation to our come back party in Paris + a useful tip to reduce your plastic consumption + a box ManaMani with 1 bread bag, 4 bulk bags and 1 kitchen-roll kit made up of 10 grey kitchen-rolls and 2 jute baskets