Research trip to analyse alternative ways of producting and consuming energy locally around the world. 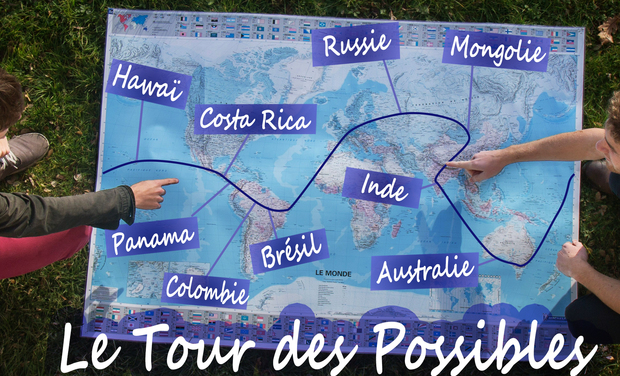 Ecourage and facilitate citizen action in the energy transition.

Through a behavioural and technical study of alternative ways to produce and consume energy at the local scale.

A video documentary on local initiatives, tutorials and technical sheets on the visited projects to prepare their reproduction.

WHERE? In 9 countries around the world in order to obtain a broad sample of our planet.

During six months from August 2017, during our gap year.

Inspired by the Transition Towns movement, by the film Tomorrow and by a lot of local initiatives which have been developed in favour of the environment, we asked ourselves how we could give a hand within our capacity to people who want to take actions as well. We got the feeling that current solutions are too big, cost too much and require too deep knowledge so that everyone can get involved.

During Le Tour des Possibles, we will collect ideas and methods which will be aimed at citizens in our cities. The identification and the study of the key factors of these projects in their context will be an innovative achievement and a will help to build new initiatives in France.

Such a research requires an overview of the local practices. It is therefore necessary to go through diversed regions in order to collect information specific to different socal, political, economic and environmental contexts.

During the trip, we will go to meet citizens who have developed innovative ideas regarding energy production and consumption at the local scale.

There are three main domains for the local projects:

- production and utilisation of renewable energies, especially with the use of Low-Tech objects.

For each project which will be encountered, an analysis grid will be prepared to answer several questions such as the key factors depending on the context, the maturity of the project, the people involved... This will enable us to study its reproductibility in another environment. We will do tutorials and technical sheets on the projets to give the means to motivated people to reproduce these initiatives.

We will also release a video documentary which will give an overview of our study and will stimulate grassroots initiatives. It will be made of local projects presentations, interviews, and a lot of images of the diverse contexts where these projects have been implemented.

- A family biodigester in Costa Rica which produces natural gas, used to cook for instance.

- Human powered sytem in India to charge batteries. This is an excellent tool to educate that energy is a valuable resource that requires serious effort to obtain.

- An earthship in Australia: a house entirely autonomous, built with natural or recycled materials.

The tutorials and projects presentations will be put online so that everyone can access them. We will organise film screenings and discussion times to share our adventure.

We are currently establishing partnerships with municipalities in which we will organise events for the citizens. This will be the opportunity to start the reproduction of some initiatives.

Paul is from Alsace, France. He studies engineering at CentraleSupelec and is currently doing his fourth year as an exchange student at the University of Cambridge.

He had had lots of opportunities to go abroad such as humanitarian projects, summer jobs, internships and several personal travels.

Paul is the secratary of the association "Objection Développement Durable" and is in charge of finding local initiatives for Le Tour des Possibles. He will be the photopgraph during the trip.

Thibaut is from Lorrain, France, and studies engineering at CentraleSupelec.

After a humanitarian project and several trips abroad, he wants to go further.

Thibaut is the president of the association "Objectif Développement Durable" and is in charge of finding the funds for Le Tour des Possibles and of its mediatisation. He will be the film director during the trip.

It's now that we need you ! This crowdfunding will cover the expenses for the equipment, in particular media equipment.   The media equipment will be composed of: - a hybrid camera to get beautiful images - a microphone to do interviews - SD cards and external hard drive to stock all of this.

The total budget for the 6 months of the research trip is estimated at 21602€. This budget is divided into 3 parts: - transport - logistic for the trip - equipment and reports

PACK STAR - We will display your picture or your name on our website! Send your most beautiful smile to us to be part of the Wall of Fame! You will also be listed in the thank-you message on Facebook. THANK YOU !

PACK MEMORY - We will send you an individualised postcard from the country of your choice (on our route) + Pack STAR. A BIG THANK YOU !

PACK MEDIA - You name will appear in the film credits and we give you the DVD of the video documentary! + Packs STAR & MEMORY. A HUGE THANK YOU!

PACK ON THE ROAD - We keep in touch! We will send you 3 individualised postcards from countries of your choice (on our road). + Packs STAR & MEDIA. AN ENORMOUS THANK YOU!

PACK PRIVATE - Live news! We will organise a Skype with you during our trip to talk about our adventure. + Packs STAR & MEMORY & MEDIA. AN IMMENSE THANK YOU!

PACK GALLERY - You will get a enlargment of 3 pictures of your choice! You lacked decoration? Don't hesitate anymore! + Packs STAR & SOUVENIR & MEDIA & PRIVATE. A GIGANTIC THANK YOU!

PACK SPONSOR - You are specially interested in a country? You can sponsor it ! We will give you access to the Google Drive of the country where we can find all the documentation we have about it (projects for the study, route in the country, places to visit and to stay, transports means, etc). We will also send you a individualised thank-you video from the country selected ! + Pack STAR & SOUVENIR & MEDIA & PRIVATE. A MONUMENTAL THANK YOU!

PACK ALL-IN-ONE - The contents of Le Tour des Possibles in an album. We will give you a photo album gathering the best photo shots as well as the descriptions (in French) of the most original projects encountered during the trip. Packs STAR & SOUVENIR & MEDIA & PRIVATE. A COLOSSAL THANK YOU!

PACK SCREENING - We organise the screening of the video documentary for you (in France), followed by a discussion time about Le Tour des Possibles. + Packs STAR & SOUVENIR & MEDIA & PRIVATE. AN INCOMMENSURABLE THANK YOU !

PACK INVOLVED - You are glad to get information but you also want to take action? We will help you reproducing one of the studied initiative at your place! + Packs STAR & SOUVENIR & MEDIA & PRIVATE. AN INFINITE THANK YOU !