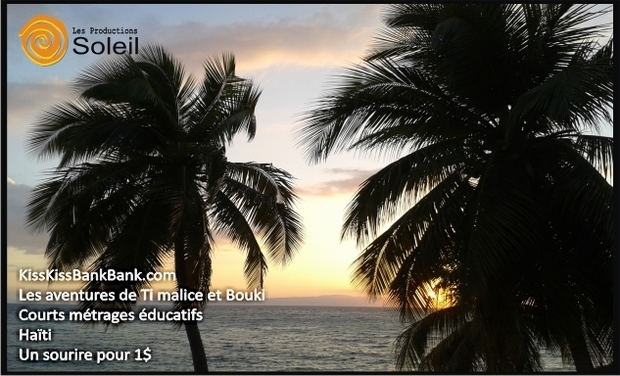 Ti Malice is a smart and witty young man. He is 18 years old and is from a stable, well integrated  family in the community, and living in a small village in the outskirts of Port-au-Prince. Malice goes to school and his results are satisfactory. He  is popular with his schoolmates. He is the positive image of the young Haitian balanced and efficient boy from a modest background.

However Bouki, who is the same age as Malice, is from a precarious family. He is in constantly facing failure. He is not in school. People affectionately make fun of him. His social integration is not completed. Bouki serves to assert Malice. The interaction between these two characters is the key driver for passing important educational messages.

Around these two protagonists evolve a series of characters that give life and existence to the village. Parents of children, for example, their friends, the school teacher ...

Ti Malice and Bouki are part of the mythical characters of Haitian folklore.

Bouki’s mother asks him to go throw the garbage. He throws it in front of Malice’s house. Malice catches him and tells him that garbage can cause all kinds of diseases and accidents. Bouki says otherwise and they argue. Bouki gets angry and leaves the scene. He slips on a banana skin he had thrown and falls. Malice helps him get up. Bouki realizes that garbage must not be thrown on private property and in the streets. He promises Malice that henceforth he will throw his garbage in the bins. The two shake hands and make peace.

Bouki and Malice sing rap and do "free style". Malice sings that Bouki is an idiot while Bouki sings about Malice being pretentious. Malice's mother hears the words and approaches them. She explains that music is not made to insult people but to make them happy and inspire peace. Bouki and Malice hug the mom and the three sing together "l’union fait la force”( Haitian music).

Natasha goes to the school all smiles, she's happy. Bouki standing before the entrance to the school, denies her access, saying that education is only for boys. She tries to break through but Bouki pushes her away. Malice sees her weeping and asks what happened. She explains that Bouki has prevented the access to school for girls, whom, according to him, are more useful for housework. Malice goes to Bouki and convinces him that girls and boys have the same rights. Bouki accepts this reasoning, apologizes to Natasha while inviting her to enter the facility.

Today these three short films are shot and edited with the help of an NGO.

Participating in this festival courts des iles where subtitles in French or English are compulsory.

Continue this project into a short series, or so long film.

Presentation of the firm and Benjamin Cardozo

Productions Soleil is a independent small business that has evolved to date in the advertising and music circles. It has a channel on YouTube with 30000 view each month from around the world with the exception of Greenland.

Today the vocation of Productions Soleil is to produce short series of educational and convey relevant messages and information to accompany the development of Haitian society.

What will the collect be used for:

It will be 8000$ or more in order to produce, film and edit 5 episodes in order to have a complete season. One episode has 3 to 4 characters of about 2 to 3 minutes and costs 1000$