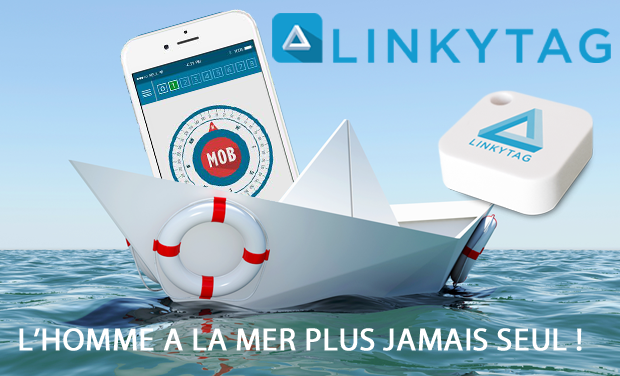 By working on “The Internet of Things” the idea came to me to look into creating an application dedicated to boating and nautical leisure, particularly for the safety of goods and persons at sea.

Knowing today that the majority of boaters are equipped with performing mobile phones, the foundation idea of this project is to offer to boaters an alert and rescue at sea wizard, mainly organized around an accessible Man Over Board procedure (MOB), available at any time for boaters and easy to operate.

Of course LinkyTag is not intended to replace safety equipment on board pleasure crafts based on the navigation category under which they are armed.

Coupled to one or many GPS sensor trackers, this application allows to automate, speed up and follow the activation procedure of this type of alert, by such facilitating the rescue process. Its community network based on seafarers solidarity, it will allow to automatically alert and such in real time all pleasure craft boaters being present close to the incident area. It will also be possible to easily report, to the network members, the hazards they may encounter at sea (UFO or Unidentified Floating Objects, divers, various nets at sea…) as well as incidents and eventual damages.

It is a water-resistant small case provided to each crew, equipped with a GPS chip powered by a coin cell communicating via Bluetooth 4.x (BLE) with the mobile phone with which it is paired. The sensor signals in real time its position related to the mobile allowing an alert when it is too far away or out of the mobile reach therefore, and depending on the set parameters, initiating an emergency alert procedure.

The sensor fits in a pocket, can be hooked by a line or a snaphook, even directly integrated in a technical apparel.

We are looking for partnership with nautical manufacturers to propose this integration and offer the first intelligent equipment!

HOW DOES IT WORKS ?

The application displays the boat’s GPS position, its speed, its course and the most important a button allowing to trigger a Man Over Board (MOB) procedure manually in the absence of sensor.

A call to rescue services may also be triggered directly from the screen to notify for example a damage or an injury and inform the community of all incidents encountered.

In case of an incident detected on one of the sensors (or in case of manual triggering by pressing the dedicated button): the Man Over Board (MOB) procedure will be immediately engaged.

The application display is forced on the terminal and the notification is modified (sensor’s display in distress on a red background). An audible warning is activated. The alert must be made within the configured settings by pressing on the dedicated button otherwise, based on the selected settings, pre set-up alerts will be launched (call for rescue services, a relative…).

For each sensor in alert, the application will display in red: the coordinates of the Man Over Board (MOB) position, how far away he is, as well as the heading and which one to head to in order to find him back and the difference between those values and the elapsed time.

When the incident is acknowledged, it is still possible to request an automatic call to the rescue services, declare a damage or an injured person with the simple touch of a button.

If the forcing of telephone alerts has not been requested, the calls will be cancelled once the alert is acknowledged.

The application also allows to view its location and those of the different elements signalled by the application others users on a cartographic page (and obviously a Man Over Board (MOB) position is a procedure has been triggered). Everyone may also report predefined elements (UFO or Unidentified Floating Objects, divers, damages, breakdowns…). In the event of an alert activation all users of the application in the area will get a notice on their telephone and the alert location will be notified on the map as well as all necessary information (GPS location, time, distance, length, boat’s name and registration). Other users may indicate if they are heading to the incident location.

The setting screen allows to set up as much as 8 sensors on a same mobile. Once followed and paired, the sensors turn to green and may be individually configured. The user may set up for each connected sensor; the type of alarms & alerts he wishes to be applied:

·       The sensor’s name and its battery charge indicator

·       Alert acknowledgement delays (if the delay is equal to 0, calls will be forced)

·       A SMS alert to a Private Number with a possibly customized text including predefined values (Location, time, boat’s name…)

·       Involvement in the community network Y/N

The application will be available for IOS and Android platforms at my stand during the International Nautical Salon of Paris in December 2014 and so under its autonomous version neither sensor nor social network but a sensor’s prototype will be in display!

The application will be available for IOS and Android platforms at my stand during the International Nautical Salon of Paris in December 2014 and so under its autonomous version neither sensor nor social network but a sensor’s prototype will be in display!

I need you to complete this promising initiative!

This fundraising will fundamentally finalize the sensor’s design in its release version in June 2015.

This project has engaged numerous coordination and implementation skills:

·  Communication and marketing talents to launch this product in the best conditions possible in order to make a success out of it.

These competences have required, in addition to the system operational phase, important investments not only in terms of time and technical resources but financially as well:

What if we were exceeding the objective?

A version including a GSM connection allowing the sensor to be autonomous for sliding sports (Windsurf, kite surf, jet-skis…) is being developed. It will then be possible to trigger rescue interventions directly from the sensor.

If the goal for funding is exceeded we can speed up the production process in its autonomous version starting this year!