You had someone in your life who helped you to be what you are, be someone to help them be something else rather than being a dump dweller. 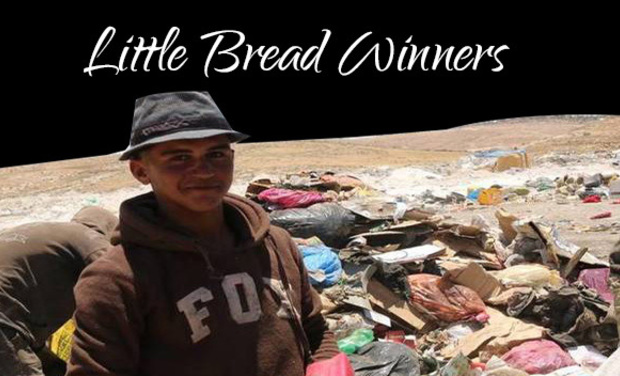 "Little Bread Winners" is one of the latest project within the Kids4Kids program of  Yes Theatre, a drama center in Hebron, Palestine, that works on creating a generation that is aware of the significance of theatre and its effect on the individual and society.

Kids4Kids produces drama plays with school children, which are then performed for other school children. The themes of the plays come directly from their mind and their souls. Participants and team of work will sometimes use an existing theatre text but the play will mostly be improvised by the children themselves. The work results in an expression of youth working together on a common idea.

This program offers the kids an activity outside school hours but which is still connected to school life. During the project, school children and students will get the chance to work together on a creative initiative and then to share it with their friends, colleagues, and families. It will be carried out by the Yes Theater's actors and drama teachers in cooperation with the Palestinian Ministry of Education and U.N.R.W.A.

The main target group of this project are children and young people between the ages of 12 -18. Other target groups (secondary target groups) are the friends, parents, family members, and teachers of these kids.

In the Hebron district Area C equates to 122 communities with an estimated population of 67,850 people. Hebron also has 46 Bedouin communities or 9, 417 people, the majority of whom are also classified as refugees. Approximately 18% of the West Bank has been designated as a closed military zone for army training exercises, or “firing zone” in Hebron this equates to 19 communities with an estimated population of 3,736 directly within ‘firing zones’ and 3 communities with populations of 1,095 people living close to ‘firing zones’. The residents of these areas are under constant threat of forced displacement and suffer constant denial of access to their agricultural lands.

The project focuses on the communities of Masafer-Yatta (Yatta District) located in the South Hebron Hills, which the Israeli military designated 30,000 hectares of land in this area as “Firing Zone 918″ which is home to approximately 1,300 people from 19 communities[1]. Residents are often called the “cave dwellers”, since many of them live close to ancient caves; some live in the caves themselves or use them for storage and housing animals. Residents are not permitted to build homes or other permanent structures and may not connect with the electricity or water supply networks. A local mosque has been demolished twice since 2011 and there are no paved roads serving the community. The local health clinic also has a demolition order issued against it[2].

The budget that will be collected by kisskissbankabank will be disbursed according to the following lines:

The Budget of the project will be disbursed  according to the following items;

The project will be implemented along three months:

From the Refugee Camp: (a second one)

For children and youth living in MasaferYatta means that they face three main risks to their wellbeing on their way to school[3]:

1) Absence of secure educational facilities; There is only one basic primary school in the area which has a classrooms located in Jinba and Al Fakheit – both classrooms have been issued with demolition orders[4].

3) A lengthy commute (24km) to the nearest Palestinian Ministry School; At Tuwani Elementary Co-education School for primary and secondary education. Some children must walk up to four kilometers to reach the classrooms at Jinba and Al Fakheit.

These commutes are often along busy and dangerous routes, causing children to arrive at school exhausted and late and increasing the risk that they experience other hazards, such as IDF or settler harassment. Compounded by factors like financial difficulties and a high cost of transportation, these protection risks result in school dropout, displacement, and family separation. Indeed, the 2007 population census shows that 23.7% of MasaferYatta and At Tuwani residents were illiterate with women comprising 67% of the total illiterates in the localities, which is a greater percentage than that of men. Of the literate population, 32.2% of residents could read and write although they had not received formal education, 25.6% had completed elementary education, 12.4% had completed preparatory education and 5.5% had completed secondary education[5]. In keeping with broader trends of high youth populations across the West Bank, 45% of the population of MasaferYatta and the nearby village of At Tuwaniwas less than 15 years old, with 51.4% between the ages of 15-64 years. Men constituted 52.8% of the population while women constituted 47.2%

The proposed project can also address and meet the following specific problems:

Yes Theatre’s project builds on the intellectual, emotional and creative resources of the community as a whole. The benefit of working through the medium of drama is that it increases self-confidence, self-awareness and self-worth, and validates individual stories and experiences. It has proven to be an effective and enjoyable way to work with children, youth and adults on personal and sensitive issues.

The proposed project addresses several issues relevant to Massafer Yatta and to children and youth in particular. The most recent national statistics (2012) show that the percentage of young people (15-29 years old) in Palestine reached 29.8% of the total population. Of all youth, 36.6% are 15-19 years old and 60.4% are 20-29 years old. The gender ration is 104.3 males for every 100 females. The total estimated Palestinian population in mid 2012 was 4.29 million.

According to a UNICEF (2012) report on psychosocial programming for children and youth in Palestine, the impact of continued fighting, the expansion of illegal settlements in the West Bank, settler violence against children and their families, military incursions, increasing demolitions of homes, the continuing Israeli blockade and the increasing restrictions on movement have had severe impacts on the psychosocial well-being, development, education and health of children. However it also states that evaluations of its psychosocial programs indicate that Palestinian children demonstrate a high degree of self-efficacy and that participation in school, participation in recreational activities and community life, increase this measure of self efficacy and as such is understood as closely correlated with a high degree of resilience.

The proposed project aims to support such activities for children and youth in marginalized areas of the Hebron district that do not have access to recreational activities.

There are almost no recreational activities available for low income families in Hebron and very few cultural activities they can participate in, the project helps provide the space and time needed to create important community resources, particularly in marginalized areas where there is no financial capital to create such space or where planning permission denied by the Israeli authorities as in Area C.

Child labour is one of the core elements of this project. According to the uploded trial, children are dropping out schools to work in site dumps. Kids 4 Kids program will help these children to recognize the importance of education and it will encourage them to come back to their schools. The produced play will be used as an advocacy tool to sensitize the local community to the importance of education and the side effects of child labour.

Our heartfelt gratitude and a pen with our organizational logo

a heartfelt gratitude, a pen stamped with Yes Theatre logo, a card wallet and an office card holder

a heartfelt gratitude, a pen stamped with Yes Theatre logo, a card wallet and a card holder, a notebook and a T-Shirt

a heartfelt gratitude, a pen stamped with Yes Theatre logo, a card wallet and a card holder, a notebook a T-shirt and a Shirt

a heartfelt gratitude, a pen stamped with Yes Theatre logo, a card wallet and a card holder, a notebook and a T-Shirt, a hand-made embroidery

a heartfelt gratitude, a pen stamped with Yes Theatre logo, a card wallet and a card holder, a notebook and a T-Shirt, a hand-made embroidery bag