French Artist Niko de La Faye will leave Shanghai on April 2013 on his kinetic sculpture ‘M2B’. After a 1800-ride he will reach Hong Kong. With this new project he will complete a 3400km-journey started in Beijing in 2012. Be part of this art performance by supporting M2B! 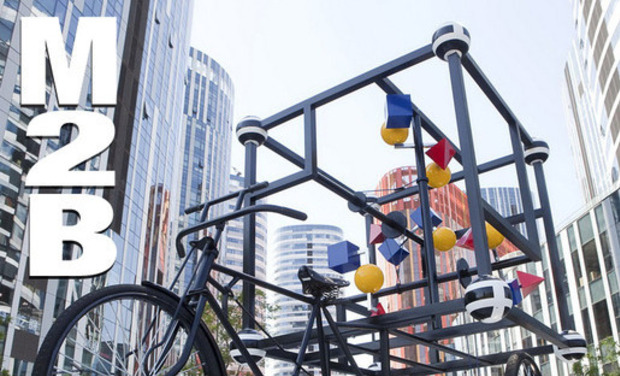 A 3400KM ART PERFORMANCE THROUGH CHINA

In May 2012 French Artist Niko de La Faye rode 1600km from Beijing to Shanghai on his kinetic sculpture ‘M2B’. He will continue this extraordinary art performance on the way to Hong Kong. This new project called ‘M2B Shanghai-Hong Kong’ will be launched in April 2013. Niko will complete it in 6 weeks, after 1800km.

During the ride Niko will carry on what he started when he left Beijing, posting videos, photos and news, daily during the whole performance, on www.facebook.com/m2bproject, www.m2bproject.com, www.weibo.com/m2bproject and http://t.qq.com/m2bproject.

M2B is an unconventional art piece. This sculpture is a representation of the cosmos - inspired from taoist symbols and western physics theory - placed on the back of a traditional Chinese tricycle. It has been created to appear as a ‘poetical interference’ into the traffic, to generate surprise and interrogation, and to create contrast with its environment.

This project also refers to the work of French Artist Nicolas Schöffer.

"This bike that is originaly a commercial platform, becomes a show-sculpture!"

Since its creation Chinese press called it a ‘magical imagination stimulator’.

This new project will also be the opportunity to continue and to develop one of the performative aspects of the sculpture: the ‘M2B Shadow Theater’, initiated during the first journey. Alike the old traditional Chinese itinerant shows, which already almost completely disappeared, M2B gives shadow shows in public spaces in cities and villages along the way. This performance is made of successive abstract and colorful canvases in motion, displayed on a white screen enveloping the cubic structure, made with lights going through the kinetic sculpture. Visuals always come with different kinds of music, often electronic.

Each show is a new creation where the speed of the elements in motion, the light and the music change.

Along its way M2B keeps generating facination and interrogation

At the arrival in May, the Artist will present the ‘M2B Beijing-Hong Kong’ exhibition. This event will gather around the ‘M2B’ sculpture a selection of photo and video works realized along the 3400km of the whole project.

We will be 3 involved in the 'M2B Shanghai-Hong Kong' ride :

The budget below covers the expenses for this little team for this 6-week-project + preparation + transportation before and after the journey + various equipments.

If we exceed this budget it will help us dealing with all the extra expenses that will come along the project (part fixing, assistance, and other surprises)