Support the creation of our manga SIDH 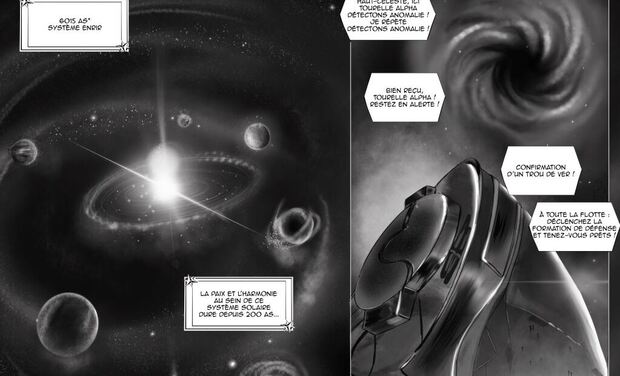 Hi to all and to all,

SIDH is a futuristic, innovative manga project from Science-Fantasy. There is something for everyone: designs inspired by video games, role-playing games, films etc ...

This project aims to offer a unique interactive experience by allowing you to make choices at key moments in history and thus to be integrated into this manga.

I am launching this campaign because I want to become a manga artist and edit this project. I count on your help.

Throughout all of the different planets that make up the ENRIR solar system, peace and order reigned under the yoke of the deities who watched mortals. The gods influenced the fate of mortals to their delight, they distributed different magical powers to some of them and observed what uses and impacts this would have on the lives of the inhabitants. Obviously over the decades alliances were created, wars of power broke out, which were perfect opportunities for divine observers to analyze the results of their experiences and after countless battles a treaty was signed guaranteeing the peace between worlds. But a people wanted the end of the domination of the gods. These people were the poorest in the whole system. Only 10% of the inhabitants possessed powers and therefore they were considered inferior. Their sovereign Zax Gan, a powerful mage, decided to eradicate the source of magic from the world of the gods. To do this, he and his people attempted to enter the realm of gods. In response to this affront the gods killed the entire family of the sovereign, and condemned all the people to wander in the limbo of space. Zax swore to return and take revenge on the gods. After Zax's attempt to enter their domain, the deities decided to seal the entrance with a portal, called the SIDH, and 6 keys: 6 tattoos, the tattoos of the star rune, that elected mortals would wear. This rune contains 6 elements of magic which each chosen one is the bearer: water, air, earth, fire, lightning and darkness. By bringing together these tattoos in the sacred place that only the elect know the place, the opening of the SIDH will be possible.

This crowdfunding will allow the writing and creation of the manga.

We are several to work on it but the collected sum will mainly be used to pay the printing, the shipping costs and the counterparts + various costs etc.

Namely that we are in total independence and that no organization finances us. This is our project! The funds can then be used for example to send contributors the 1st volume free of charge or otherwise to thank each of you who will have helped me financially by figurines or posters or others. If the campaign is successful, KissKissBankBank recovers 8% of the value of the campaign.