Participate in financing a part of my 2nd album which will come out in autumn 2018! 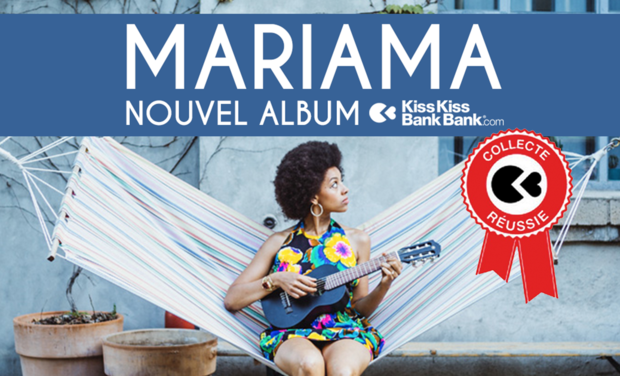 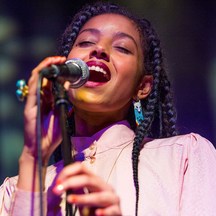 Hello,
I am Mariama, singer and songwriter.

I'm calling on you today to help me produce my second album.
Are you ready to follow me on this great adventure?

My family tree has its roots in many places, but I was born in Freetown, Sierra Leone and raised near Cologne, Germany.
I now live between Paris and Cologne.
After several years of artistic encounters which inspired and influenced me, I had the opportunity to go on tour with a number of artists who invited me to share the stage with them: Tiken Jah Fakoly, Yaël Naïm, Stromae, Imany, The Do, Brigitte, Lilly Wood & the Prick, Oxmo, Matthieu Chedid - Lamomali.
My first Album "Easy Way Out" was released in 2012 on a French label. Thanks to this album, I was able to play my own concerts where I met many of you who keep following me to this day.

I released the EP "No Way" in 2013, with appearances by Taïro, Moh Kouyaté, Sayem and Jim Dunloop, before recording "Moments Like These" - an EP entirely produced by me and recorded with Abdoulaye Kouyaté on guitar and kora, which was released in 2015.
This beautiful independent experience allowed me to travel and play across Europe, Africa and all the way to Brazil.

When I was asked and accepted to participate in the play "The Toad knew" by James Thiérrée in December 2015 it took me on a completely different journey, a very unique experience that taught me a lot - we played over 100 sold out shows across Europe in 2016.

It is time today to return to what I have been preparing all the while: my second album...with YOU!

I decided to produce it alone.
Finally not quite because it is the result of encounters and collaborations that have enriched me and carried me during these two years of creation. With my friend, coproducer and sound engineer Manuel Schlindwein, we searched for the essence of each piece. It will be infused with folk, soul, pop, West African instruments and everything that inspires me and carries me during the process of creation.
When I say I produced it alone, I mean financially. So far I came up with all the funds for the recordings in order to put myself in the best conditions for writing and composing this album.

It was not an easy choice, because it involves struggling every day to find the financial and human resources. BUT, and this was very important to me, it allowed me great freedom in my choices.

Well, to make things easier, I am planning a release in France AND Germany ;) To release an album in 2 countries implies a double investment in manufacturing, promotion and marketing.

It will take a little while for this album to be ready, because a lot of things are happening between the recording and the release,  but I will give you all the latest news by keeping a diary where you will discover what's going on behind the scenes during this crazy year that lies ahead.

Personally, I can't wait for you to discover the outcome and to meet you in concert! :)

I also want to produce this album with you.
Because there is the music, obviously, but there is also all the rest that goes with it: Artwork, photos, videos, promotion and and and... Now multiply everything by two so there can be a realease in France AND Germany.

Here are some numbers to give you an idea:

As you can see, 10,000 euros is only a small part of what we need to finance everything.

If we exceed the objective, we will be able to realize even more of our ideas and in particular a third clip for the album release in autumn 2018. We will be able to finance some more marketing and promotion, unleash our imagination with special operations throughout the year and finally celebrate an album release that will reflect all the love and hard work we put into it in order to present it to you.

Here is a little preview for what we have planned:

This is my invitation for you to embark on this journey with me now!
From 1 € to 1.000.000 €, whatever you choose to give will be useful to make this adventure possible.

Rising Bird Music will collect the entire funding. ​​As my management they handle the executive part of the production and will ensure all transactions and also the tedious task of meticulous accounting. ;)

Thank you very much and I hope to see you on the road or elsewhere very soon!

* A little clarification on the "HOME SWEET HOME" and "YOUR EVENT" counterparties: please note that the travel expenses and sound system of the place are at your expense.

Download my first single one day before its release and become part of the adventure by getting access to my online diary with exclusive stories, photos and videos... Thank you!!

You'll receive the previous rewards + download of my new album (once released) + exclusive previews before each official release Thank you!!

You'll receive the previous rewards + 1 new album on CD (once released) + a postcard + exclusive previews before each official release from my album. Thank you!!

You'll receive the vinyl + download of my new album (once released) + a postcard + exclusive previews before each official release from my album. Thank you!!

SING WITH ME: Are you interested in exploring and working with your singing voice? Would you like to find out about songwriting? Then let's get together in COLOGNE or PARIS and in a 45 minute personalized lesson I'll tell, show and teach you what I know about voice, vocal technique and the process of songwriting.+ download of my new album (once released) + exclusive previews before each official release from my album THANK YOU!!

SURPRISE: You'll receive my new album on vinyl + CD + download SURPRISES. Are you ready to let yourself be surprised?! You will get a nice package delivered to your home with lots of love and goodies inside! And of course: exclusive previews before each official release from my album + Thank you!!

MOMENTS LIKE THESE: Let's get together over a cup of tea and I'll show you one of my favourite spots in Paris, France or Cologne, Germany + my new album, DELUXE version (Vinyl + CD + download) + 1 autographed poster + 1 autographed postcard (delivery included) + exclusive previews before each official release from my album. (Please note that travel expenses will be at your cost) Thank you!!

LIVE: Get 4 tickets for one of my concerts and meet me before the gig + get my album Deluxe version (Vinyl + CD + download) + autographed poster + autographed postcard (delivery included) + exclusive previews before each official release from my album. (Please note that travel expenses will be at your cost) Thank you!!

YOUR EVENT I: Private showcase in your company premises, at your wedding, birthday, bar mitzvah etc. ... I'll play a solo concert of about 30 minutes for you. We will share a moment with your guests during a signing session (15 albums offered) + exclusive previews before each official release from my album. Thank you!!

YOUR EVENT II: Private showcase in your company premises, at your wedding, birthday, bar mitzvah etc.... I play a solo concert of about 45 minutes for you. We will share a moment with your guests during a signing session (30 albums offered) + exclusive previews before each official release from my album. Thank you!!

YOUR EVENT III (XL): Private showcase in your company premises, at your wedding, birthday, bar mitzvah etc..... I will play a solo concert of about 60 minutes for you. We will share a moment with your guests during a signing session (50 albums offered) + your logo will appear on my album + exclusive previews before each official release. Thank you!!